Editor’s note: Thanks to some new insights from the facility staff, we’ve updated this case study.

It’s All in the Details

Atlanta is the third Memory Center location, and MemCare has learned something with each iteration. Lilliana reviewed the design of the previous locations as she worked with her client to determine what could make this location even more successful. All three locations (two are in Virginia) feature a town center with amenity spaces like a salon, a general store, a theater, and much more. Each also incorporate local landmarks and iconic street names to bring a local flair and provide a sense of the familiar. 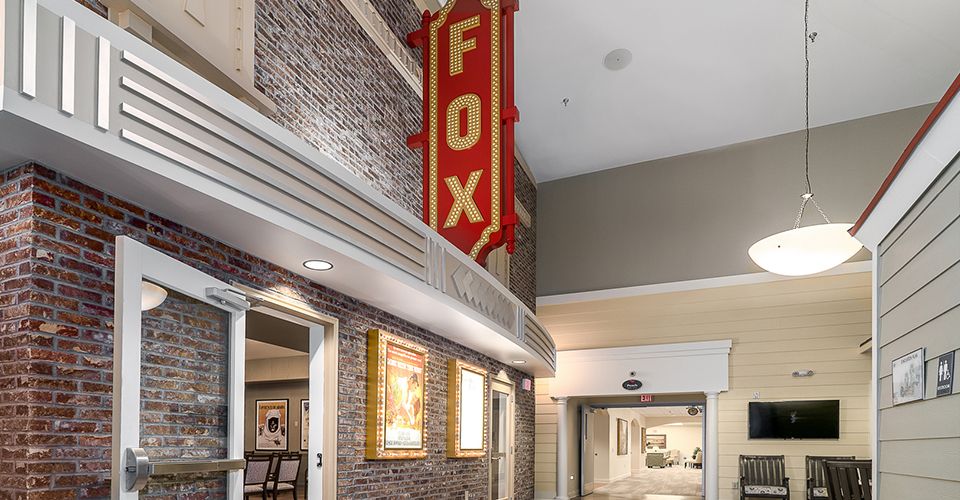 A replica of Midtown Atlanta’s famous Fox Theater sign hangs outside the center’s theater, which is decorated with vintage movie posters and includes an old-fashioned popcorn machine. Image courtesy of The Memory Center

Atlanta was already set to be a larger space, but what ultimately sets it apart is the attention to design details. Lilliana was brought in after construction was underway, so she relied on finishings like wallcoverings, flooring and furniture to distinguish and elevate each area.

She says, “Before, every amenity space looked the same. So, I tried to make each space unique, and I think we were successful with that.” One significant change was the flooring. The other locations had used porcelain tiles in the town center and in many amenity areas, but Lilliana was concerned that the grout lines and transitions from hard to soft surfaces could pose a tripping hazard for patients with walkers and similar devices. Lilliana chose Interface’s LVT.

“When my Interface rep presented the LVT with the same thickness as the carpet tile, it was a no brainer,” she says. “MemCare was excited about it as well because obviously, patient safety is a priority for them. In fact, they’re looking at renovating the first two facilities with Interface as well.” Lilliana used different styles of Interface LVT and carpet tile throughout the spaces, including a stone look LVT for dining areas and woodgrain LVT for the “streets” and town center.

She adds, “Having all the products together from the carpet to the LVT to the rubber is really amazing. If something goes wrong, you have one point of contact.” 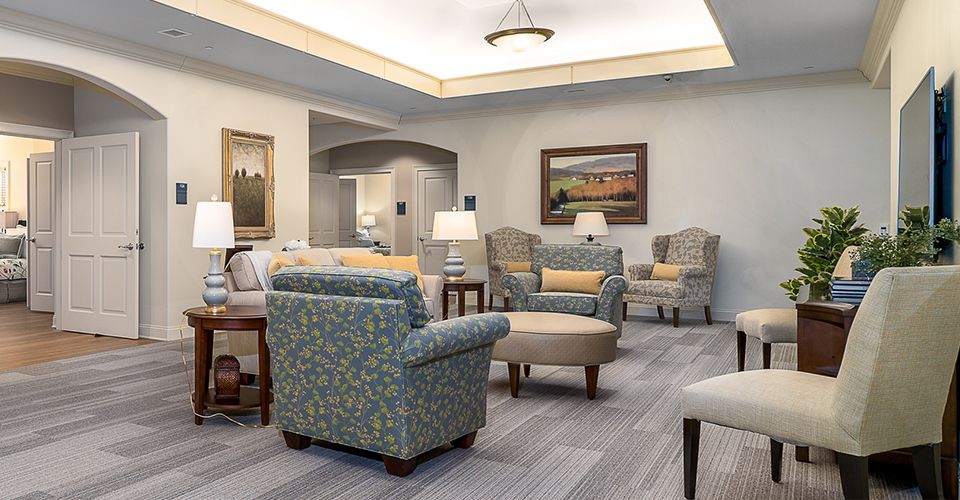 Each “neighborhood” has its own living and dining areas, as well as a large kitchen in which patients are allowed to help out as they are able. Image courtesy of The Memory Center 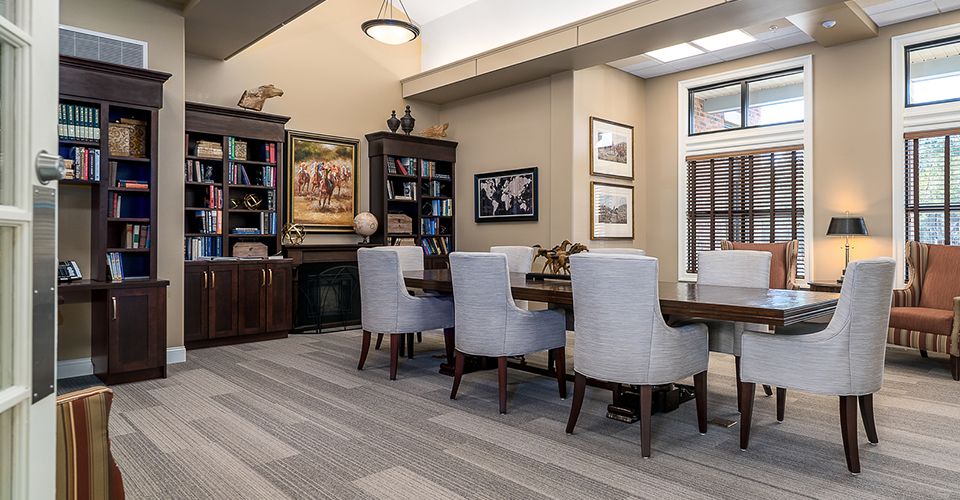 “Acoustics in the library are amazing, and the residents really engage in this setting. They used it to plan a very successful fund raiser, raising $550 for the Dementia Spotlight Foundation.” – Julie Taylor. Image courtesy of The Memory Center 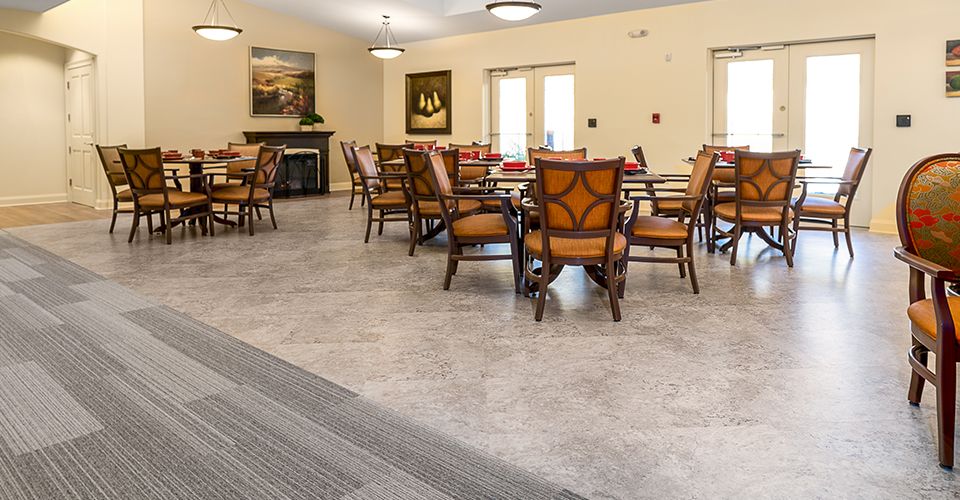 “Seamless flooring transitions allow residents to maintain their independence and walk freely without fear of falls or risk of injury.” – Amar Mohan. Image courtesy of the the Memory Center

All Roads Lead to Town

Each area is beautiful and distinct, but the Town Center is by far the biggest hit. Atlanta’s Executive Director, Julie Taylor, reports that “People have said what makes this whole town center is the floor. It really stands out.” And unlike traditional hard floors, the acoustics with Interface’s LVT haven’t been an issue. She adds, “Everyone has been able to hear with every entertainer we’ve had. We have little kids come sing and it works well.” 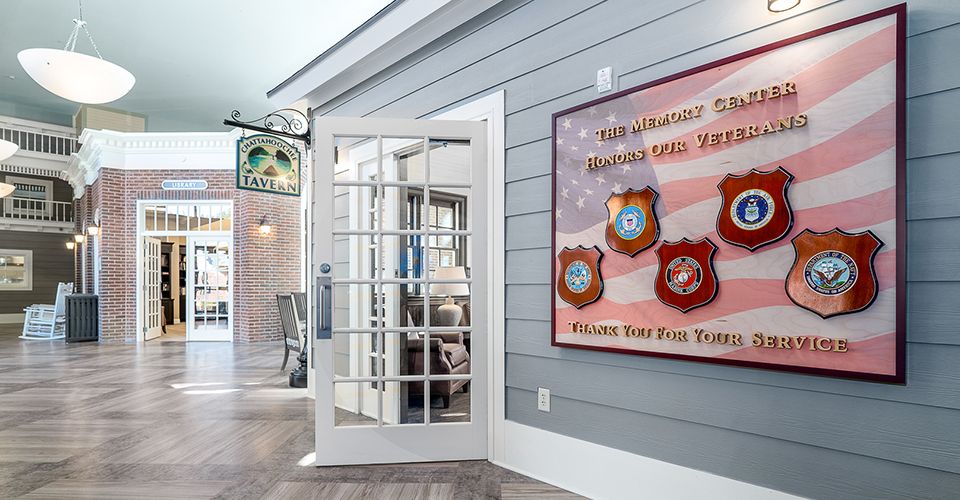 “I love being here because these people in their 70s, 80s and 90s are called the ‘greatest generation’ for a reason. They still have purpose and so much to offer despite their cognitive issues.” – Stacey McNamara. Image courtesy of The Memory Center 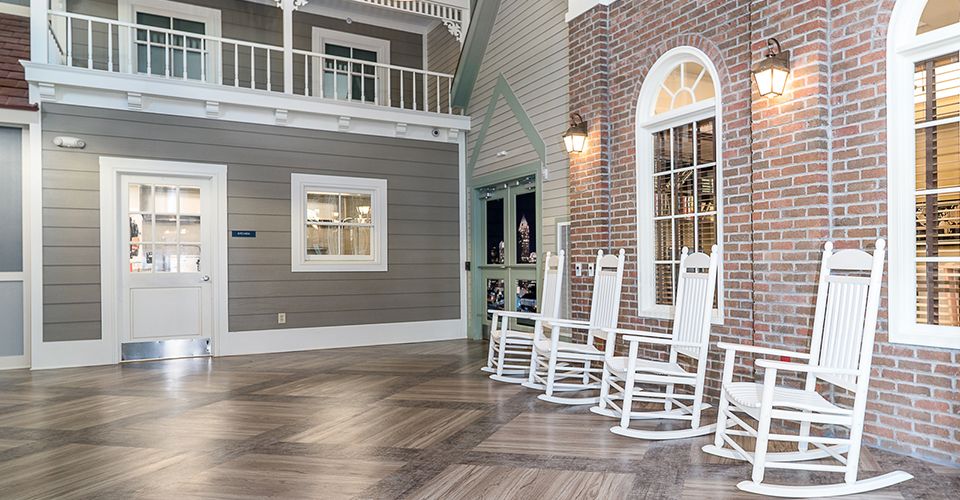 “The size of the Town Center provides much needed walking space, giving residents exercise without having to make a conscious effort.” – Kevin DiBona. Image courtesy of The Memory Center 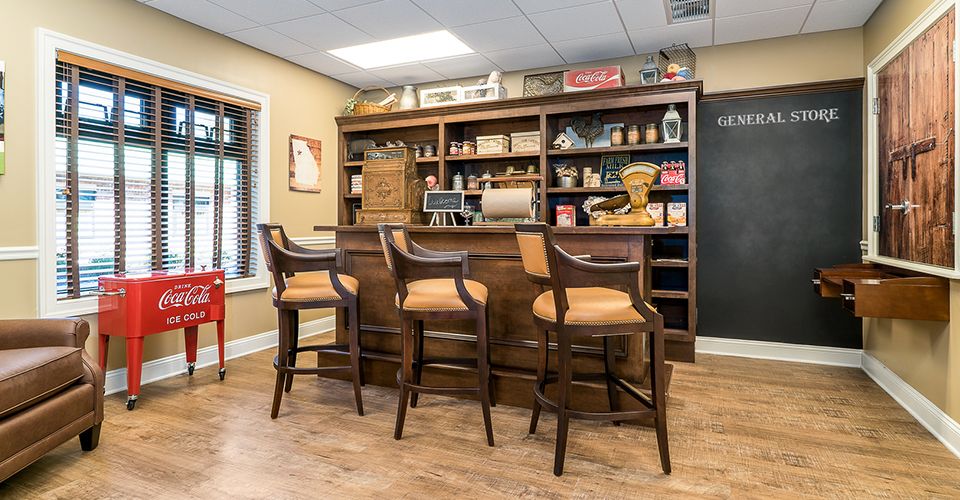 “Residents not only purchase items at the general store, but those who are able “work” there as well, giving them more of a sense of purpose.” – Lilliana Alvarado. Image courtesy of The Memory Center

The larger indoor area also provides more opportunity for exercise. Because each space has its own look and feel, patients are motivated to explore the various neighborhoods, as well as the town center. The Memory Center’s Chairman and CEO, Kevin DiBona, says, “This design makes the residents feel like they live in a neighborhood and can go ‘outside’ in the Town Center without having to ask permission. The residents feel a sense of purpose because they volunteer to ‘work’ in the General Store, not just shop there. They plant flowers, herbs and vegetables in raised beds in the courtyards and again, feel a sense of purpose having to water them. They are so proud to be supplying vegetables to the kitchen.”

Activity Director Stacey McNamara makes full use of the space with up to eight planned activities for residents each day. She says, “My goal is to have them engaged in something that makes them happy and makes them feel like they have a purpose. I find out what activities they enjoy, and if it needs to be one on one with them or small groups, I’ll do that too.”

How Do They Measure Success?

Because adult patients with dementia are unable to rationalize the need for boundaries, many experience varying degrees of agitation when placed in care. They simply want to leave. Since The Memory Center Atlanta has created a thriving community with plenty of activity, spatial variety and a realistic illusion of being out on the town, residents who exhibited that behavior at other facilities don’t exhibit it here. Julie says, “A couple of patients who had to leave other memory care centers because they were unable to adjust have come here and they’ve been fine. That behavior just goes away. It’s been fun to watch how it actually works.”

In addition, the high caregiver to patient ratio enables much more individualized care. Medical Director Dr. Amar Mohan cites examples of patients who have transferred from other facilities.  “We’ve been able to reduce medications for some bed-bound patients who were unable to speak. They’re able to walk again and communicate with their loved ones. They’ve regained cognitive function in a way that allows them to more fully enjoy their life.”

One response to “The Memory Center Atlanta Fosters Independence Through Community”