These days, it seems like Planet Earth has a lot of environmental problems. It’s easy to get overwhelmed by the daily, myriad reports about Earth’s predicaments. Some of the biggest issues today include the plethora of plastic in the oceans, the disappearance of wildernesses to mono-cropping farmland, and the mounting levels of carbon dioxide in the atmosphere. But what if there was a way to turn a problem into a solution?

One of the most ambitious fights against global warming today is being fought on the carbon capture and sequestration front. Instead of viewing carbon as a problem, entrepreneurs across many sectors are viewing carbon as an economic and environmental opportunity. Many technologies are emerging to capture, use and store carbon promising a new optimism and new pathways to address the issue of global warming. There are many ways of capturing carbon naturally (trees being an obvious example), but unfortunately the planet’s built-in methods of regulating this organic material just can’t compete with humanity’s output. Fortunately, the private sector is stepping in to provide new and exciting solutions, particularly in the built environment space. Large companies like Shell and Chevron each have their own pilot programs to clean up the oil refinery business, while smaller enterprises like CarbonCure and Carbon8 Systems seek to make the built environment more earth-friendly by creating clean concrete and synthetic limestone. 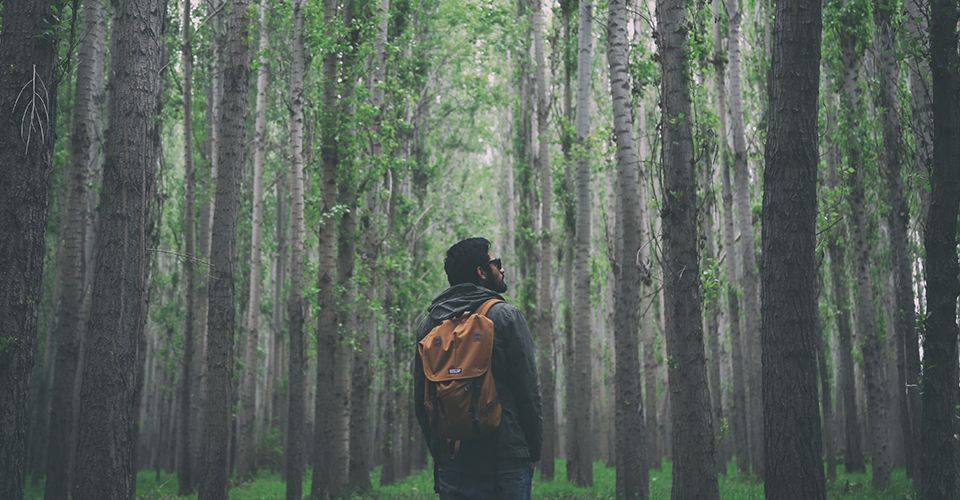 A mature tree can absorb as much as 48 pounds of carbon annually.

The AEC (architecture, engineering, construction) industry is especially in need of radical environmental action. According to the International Energy Association, two trillion square feet of new and rebuilt buildings will be constructed in cities worldwide over the next 35 years. To put this in perspective, humans are building the city of New York every 35 days over that amount of time. Couple that with the fact that buildings contribute 40% of all annual CO2 emissions and keeping them lit, cooled, and secure consumes an inordinate amount of electricity (75% of all electricity produced in the US is used just to keep buildings operational), the need couldn’t be more obvious. Forward thinking architects and designers are also looking beyond the impacts of heating and cooling these buildings to consider the processes behind the materials they use. Specifically, they’re paying more attention to how much carbon dioxide is released during the manufacture of building materials. These emissions – called embodied carbon – represent a huge opportunity for designers to have a direct and positive impact.

“Cars and industrial manufacturing are the most obvious sources of carbon emissions, but the built environment is a major contributor,” says Erin Meezan, chief sustainability officer at Interface. “But what that means is that architects and designers have a unique opportunity to be part of the solution, too.”

Meezan, and by extension Interface, a leader in modular contract flooring solutions, knows that reducing carbon in the built environment isn’t just necessary — it’s completely achievable today. Interface has incorporated sustainable practices into its company framework since 1994. It is the only brand to boast a 96% reduction in greenhouse gas (GHG) emissions and a 60% reduction in its carbon footprint—the lowest in the industry. Building on this 20-year progress to reduce carbon impacts means Interface is now positioned to make a significant guarantee: all its products, carpet and LVT, are now carbon neutral across the globe. Interface estimates that 400,000 metric tons of carbon emissions will be diverted in 2018 as part of the Carbon Neutral Floors™ program, which is equivalent to the carbon absorbed annually by nearly half a million acres of forest. 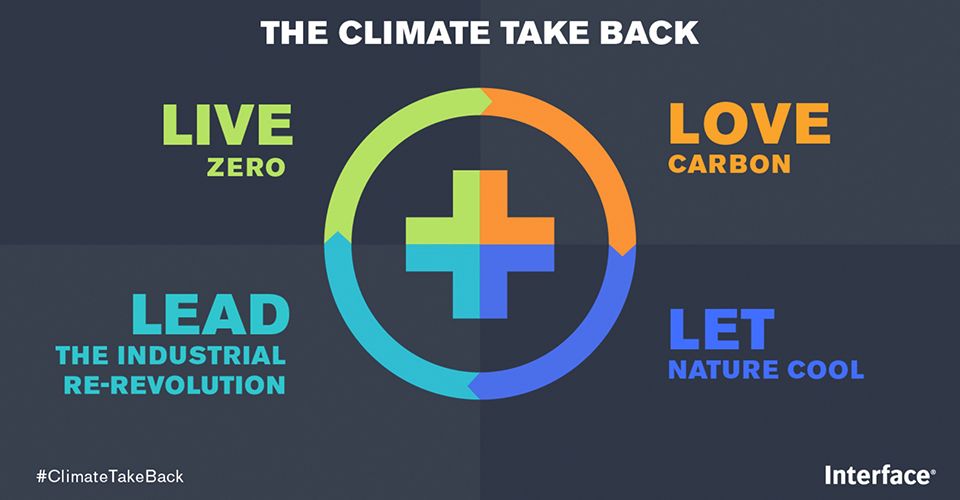 But carbon neutrality is not enough. In fact, it’s the first step in Interface’s new Climate Take Back™ mission.

One of the most unique elements of Climate Take Back includes a provision to love carbon. Sound confusing? What it actually means is that Interface sees carbon emissions not as an industry evil that needs to be squashed, but as a natural byproduct that could be repurposed to build a cleaner world. Through product innovation, they aim to change the conversation around embodied carbon. When Interface introduced its prototype Proof Positive™ carpet tile, it was the first of its kind in the market—a carbon-negative floor covering. The concept tile proved that it’s possible to store carbon within a product rather than emit more carbon into the atmosphere during the process of making it. 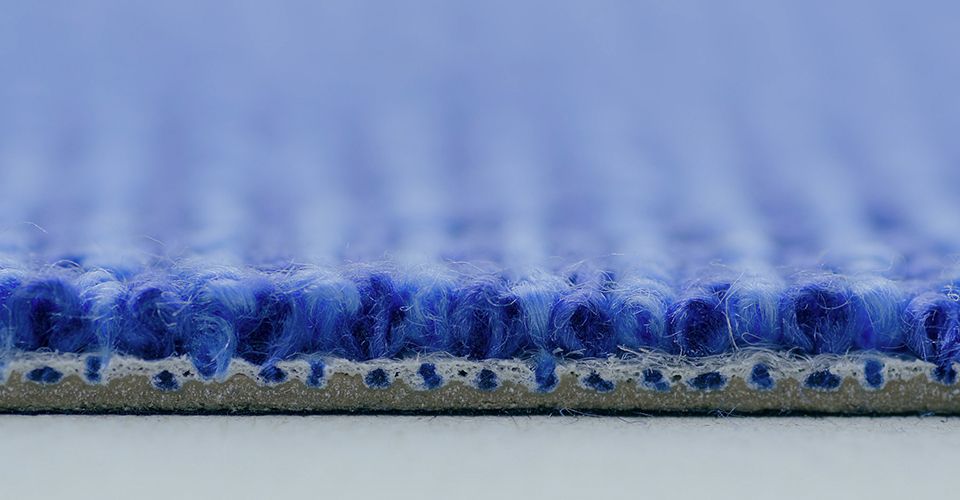 Since then, the backing used in the Proof Positive prototype has launched commercially in Europe as CircuitBac Green™, the company’s most sustainable carpet backing option that absorbs more carbon than it emits. CircuitBac Green is just another example of a product that is addressing carbon emissions in the built environment. 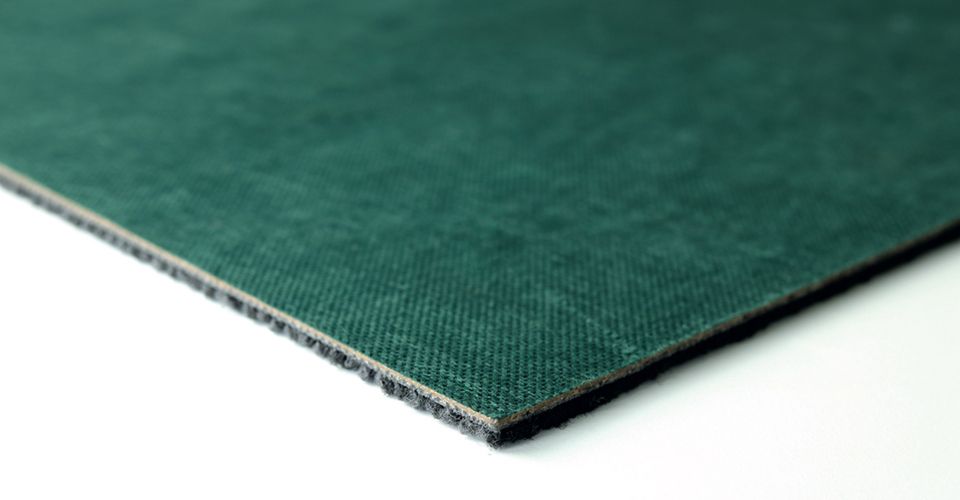 CircuitBac Green™ backing on a piece of carpet tile.

Ultimately, architects and designers have the conceptual tools to tackle climate change during the design process; for instance, using carbon footprint and embodied carbon as a guide to make more responsible decisions around materials. Embracing changes like these could catapult the design industry into a leadership position among global professions who are tackling climate change.

“Architects, designers, flooring contractors, and end users are beginning to see that their decisions—the products they specify and buy—have a direct impact on our climate,” says Meezan. “Because all of our products are carbon neutral, by specifying Interface products, they can do their part to address embodied carbon. With every purchase, our customers are joining us in this important endeavor.”