An excerpt from Ecopuncture: Transforming Architecture and Urbanism in Asia

This article is an excerpt from the book Ecopuncture: Transforming Architecture and Urbanism in Asia, by Nirmal Kishnani (www.ecopuncture-asia.com), published by FuturArc and sponsored by Interface. The Jetwing Vil Uyana Resort is one of 16 projects featured that repair and regenerate. The book traces their rationale and impact, and demonstrates how each project can simultaneously benefit natural and human systems.

The decision to build a resort in the midst of a civil war was a risky endeavour. Moreover, when construction on Jetwing Vil Uyana (JVU) began in 2003, the idea of sustainability seemed to hold no strategic advantage for the Sri Lankan hospitality sector. Ecotourism had not caught on yet, and sustainability appeared only to increase capital investment.

Jetwing Group chairman Hiran Cooray saw things differently. Tourists, he argued, would eventually come and pay for a connection to history and Nature. The land he had purchased for JVU was unique. Situated in an area known for free-roaming elephants, it had a direct line of sight to the Sigiriya Rock, a well-known archaeological site. It was also within the watershed of the Kala Oya basin where water bodies have become disconnected from each other.

Cooray began by greenlighting the restoration of this 10–ha abandoned farmland, contaminated with agricultural chemicals, for a sum of LKR 176.5 million (USD 1 million) — which was no small amount in this developing country. He was inspired by water-centric ecological landscapes he had visited in the United Kingdom and Costa Rica in the 1990s. He was also influenced by the traditional Sri Lankan tank cascade system, created hundreds of years earlier, to manage water moving through an agricultural landscape. 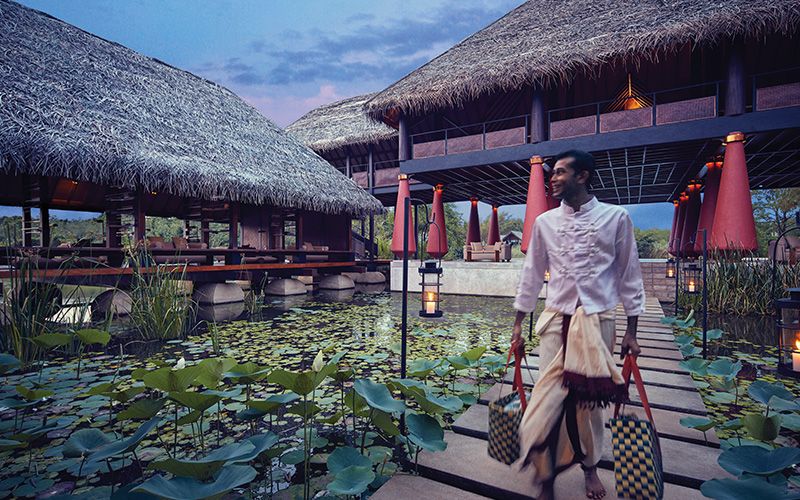 Built in the middle of a civil war, the Jetwing Vil Uyana resort sits on a restored 10-ha piece of abandoned farmland once contaminated with agricultural chemicals. Today it is one of the top five eco luxury lodges in the world. Photo credit: Jetwing Hotels Ltd.

The form-logic of JVU is centred around a new tank cascade in which water runs through three distinct zones: forest, tank, and farm. As the flow is channelled through the site, it slows down in detention ponds, before being discharged into a wider network. Layered onto this, 36 villas and resort amenities touch the earth lightly, often elevated above ground, so as not to disrupt the movement of animals and water.

Rainwater is collected by 1.6 ha of water bodies, and filtered by an additional 3 ha of wetlands. This hydrological network recharges groundwater, and irrigates several hectares of land, including 2 ha of paddy fields and 2 ha of forest. Excess water then re-enters the local catchment.

Biodiversity introduced into the site, from trees to fishes, is indigenous. Emphasis was placed on vegetation that attracts birds and butterflies. Once the waterways were created and green cover increased, species counts jumped exponentially. In a 2005 audit, 29 species of birds were recorded onsite. Since JVU opened in 2006, an additional 101 species have been found. Fauna now include otters, monitor lizards, monkeys, peacocks, crocodiles, and the occasional elephant. The site has become an important node within the Sigiriya bio conservation zone.

The resort has contributed to capacity and connectivity of the basin, improving both the flow and quality of water. The outflow of clean water supports nearby farms. The ecological network around JVU includes abandoned paddy fields to the west, and a forest to the north, that extends to the nearby wildlife conservation sanctuary. 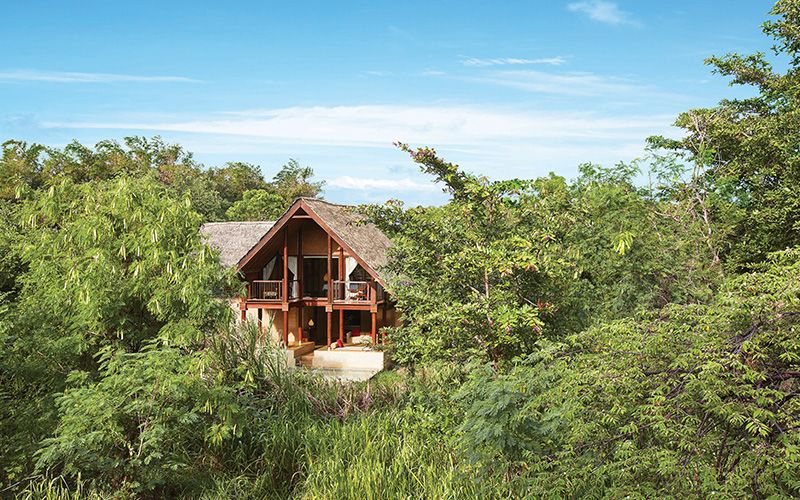 The ecological network around the resort includes abandoned paddy fields and a forest that extends to the nearby wildlife conservation sanctuary. Photo credit: Jetwing Hotels Ltd.

Sixty per cent of the staff are from nearby villages. Contributing to the local economy, JVU has also sought to revive traditional craft, including farming methods and age-old construction techniques. The resort opens its doors to researchers, students, and academics studying conservation. A dormitory is set aside for these groups. A resident naturalist has been appointed to educate guests and visitors alike. In-house, all employees are trained in biodiversity conservation and environmental management practices.

The vernacular styling of the resort architecture improves passive comfort. Villas can be opened to air and light, offering visual connectivity with the landscape. Energy demand reduction and systemic efficiency save over 2.4 million kWh/yr. Rainwater is collected in a reservoir, and used for irrigation and groundwater recharge. In the dry season, the process is supplemented with treated greywater. Excess water overflows into the paddy fields via irrigation canals, or re-enters the local water catchment.

Buildings were made entirely of natural materials, locally sourced whenever possible. The roofs, for example, are thatched coconut palm; paints are natural dyes. Guest slippers and laundry baskets are made with woven reeds. All waste (plastic, glass, paper, metal) is sorted and sold for recycling. Horticultural waste, which produces up to 155 kg of compost each month, is used in the garden or sold as organic fertiliser. Food waste is collected and sent to a nearby pig farm as animal feed. Two hectares of paddy fields and vegetable gardens deliver annual yields of 600 kg of rice and over 1,000 kg of fresh produce.

Some of what JVU has done is being replicated in other Jetwing properties. Several other resorts in the region have adopted similar strategies for integrating water and landscape. The financial capital generated by JVU’s success has created room for investments into local training programs, improving employment prospects for the surrounding community. Nearby farmers have learned better ways to farm and manage ecosystems. Some villagers even branch into tourism themselves by listing their homes on lodging websites like Airbnb. Moreover, the Jetwing Youth Development Project, funded in part by JVU, has sought to provide training and support to underprivileged youth across Sri Lanka — including former soldiers.

The surrounding land has not flooded since the resort opened. The site is now home to a vast number of species, including 25 mammals, 36 species of butterflies, and 35 species of reptiles and amphibians. The presence of loris, an endangered species of nocturnal primates, has created a buzz, in particular amongst nature enthusiasts worldwide. 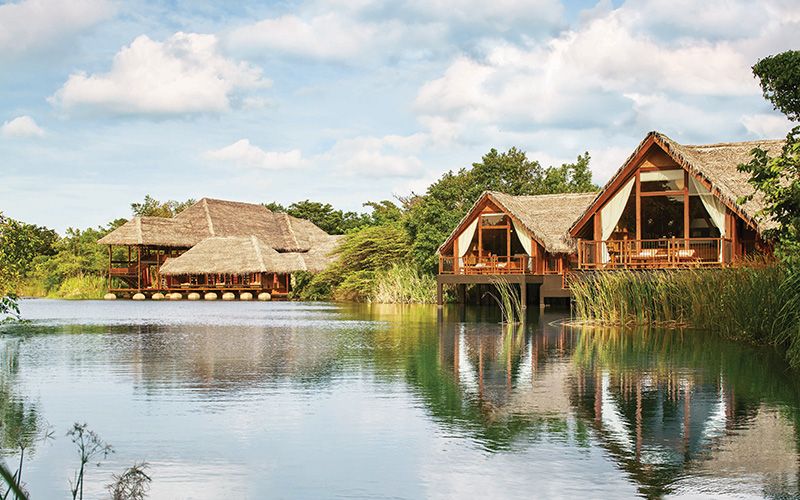 A vast number of species now call the resort home, including 25 mammals, 36 species of butterflies and 35 species of reptiles and amphibians. Photo credit: Jetwing Hotels Ltd.

As JVU engages community and Nature, its global reputation grows. It is the flagship development in the Jetwing portfolio, one of the group’s most profitable properties. It is also one of the top five eco luxury lodges in the world, and has won multiple awards for its wildlife conservation and community engagement.

Water – from crashing waves to trickling streams, wading pools, and water fountains – enhances the experience of a place. Pattern 5: Presence of Water The Presence of Water biophilic design pattern has evolved from research on the health and wellbeing benefits associated with access to water, including reduced stress, lower heart rate and blood…

The amount of carbon in the atmosphere always stays the same: Actually, it has changed. Human activity, known as the Anthropocene, is what has disrupted the carbon cycle over the last few years. But we still have the opportunity to change this by making low carbon choices, protecting our natural carbon sinks – such as…