Taking A Further Step Together

While the rest of the world signed on to the ambitious plan of achieving 17 Sustainable Development Goals by 2030, the small land-locked country of Lao PDR took it a step further.

Sustainable Development Goal 18 (SDG18) is Lao PDR’s unique national goal aimed at combating the extreme challenge of dealing with millions of Unexploded Ordnance (UXO) littered across the country. Many of these bombs have maimed tens of thousands of people and have claimed thousands of lives and continue to do so. 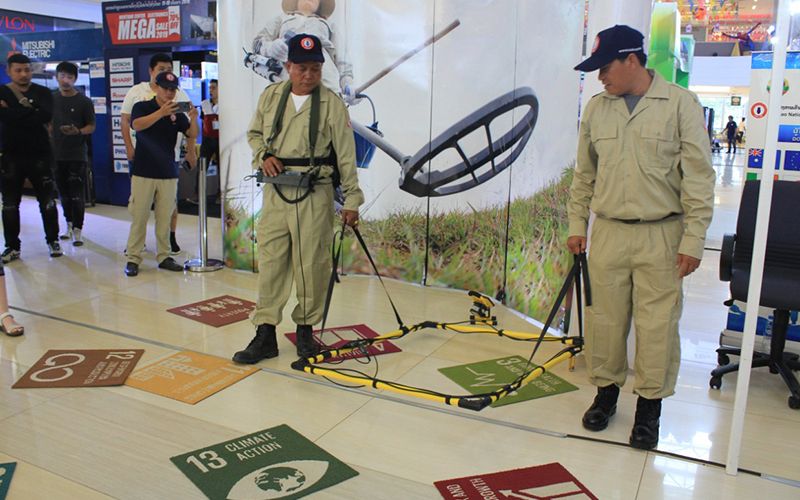 Provinces in Laos remain contaminated with Unexploded Ordnance (UXO). That’s why Laos has committed to its own unique national Sustainable Development Goal – Lives Safe From UXO. In this picture: a UXO equipment demonstration at the Accelerator Lab launch in Lao PDR. Photo: UXO Lao/Vansalong Khamchaisong

The UXO’s impact ripples far and wide across the country and goes well beyond injury and death. It has blunted socio-economic development, prevented access to agricultural land, and because land must be cleared for any project, it has ratcheted up development costs.

The SDGs have defined roles and purposes which include ending injustice, inequality, poverty and tackling climate change by 2030. The aim is to improve the lives of people around the world and encourage governments to follow a more sustainable development path. So ironically, in Lao PDR, SDG 18 is crucial in helping to achieve most of the other SDGs.

There is little question that meeting the SDGs targets is an ambitious task. While government and multilateral agencies are pushing ahead, they cannot get there alone. To meet the targets, we need wider engagement, not just NGOs and the private sector but all of society. So, public awareness is critical.

While there are several campaigns across the Asia Pacific region, one particular awareness project that UNDP has engaged in, with the carpet company Interface, has come up with a novel concept.

Interface’s mission is to run its business in a way that reverses global warming and creates a climate fit for life, an evolution of its Mission Zero goal to eliminate any harm it does to the environment by 2020. Once, it was like most of its competitors in the synthetic carpet business, using non-renewable oil, with discarded carpets leaching toxic chemicals into the soil and contributing to methane emissions.

But after reading a book by Paul Hawken, an environmental activist, Ray Andersen, the founder of Interface, transformed the company to focus on sustainability.

Now, Interface is producing SDGs carpets for UNDP – and it produced a special one for Lao PDR with SDG square 18. The carpet is displayed at the entrance of UN house and has been showcased at several UNDP events.

In September, the UNDP Country Office team launched the new Accelerator Lab initiative at the Vientiane Shopping Center. At the UXO booth, the SDG carpets were placed around the exhibit, and used to play an interactive game with attendees, through the demonstration of a UXO survey detector. 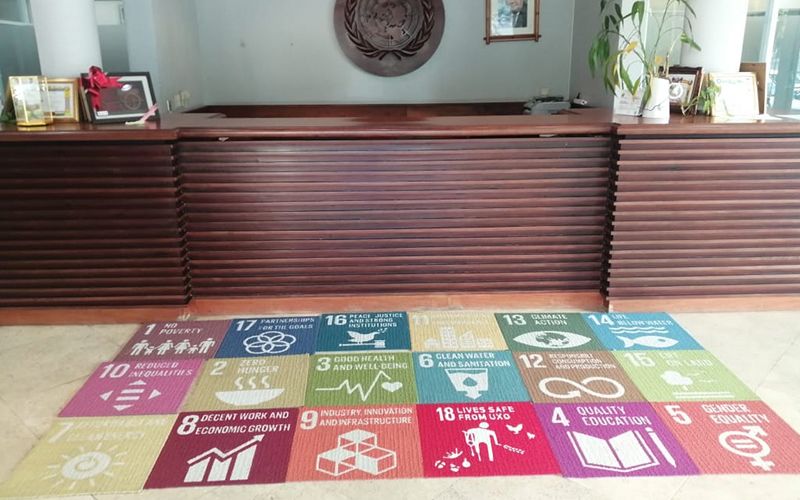 Interface is helping to spread the word on SDG 18 with our customised digital-cut carpet tiles. Photo: UNDP Lao PDR/Phetsamone Southalack

Many people including teens from the local high school and young adults were eager to learn about and use the UXO equipment while searching for the ‘free from explosive’ bombie under the SDG carpets. This activity enhanced public engagement and created a buzz about the newly launched Accelerator Lab.

While the game was simply a demonstration, it was symbolic of what UXO clearance teams deal with every day. It is dangerous and arduous work and in the last two decades it has claimed the lives of three clearance team members and a few other have suffered injuries.  But their step by step, grid by grid meticulous work has brought safety to communities across the country.

The road to eradicating tens of millions of UXOs is undeniably long, but if we work together, innovate and collaborate, we will be able to meet Goal 18 and along with it bring much more prosperity for the people of Lao.

The views expressed in this article are those of the author alone and not the United Nations Development Programme.

Can Flooring Define The Boundaries Of A Space?

Can Flooring Define The Boundaries Of A Space?

With limited space and lead time, the flooring of the Monash University project proved that carpet tile can indeed define the prescribed functions of a space. Undertaken within an astonishingly tight deadline of two weeks, the Monash University Australian Law Faculty, Clayton Campus project by Dasch Associates in Melbourne, was incredibly successful. This humble little…

In a post-COVID-19 world, emotional wellbeing will become more important than ever. Regardless of what our built spaces look like in the future, it makes sense that we need to give more thought to how they make us feel. Considering we spend the majority of our lives indoors, can we use biophilic design to support emotional wellbeing?