Established in Singapore in 1984, Technigroup is a global designer and manufacturer of system furniture, office seatings and hospitality products, priding itself on sleek, high-quality design solutions. Its products have been installed in three continents across the globe. For its new office and showroom in South Jakarta, Indonesia, the company needed a modern, luxurious space that could meet the multifaceted needs of its employees and customers. The ideal workspace would be spacious and flexible, allowing for product displays to be configured and reconfigured – and transforming into an event and or a townhall meeting space in a snap. Technigroup also wanted its office and showroom to be an oasis for its visitors and employees – a rejuvenating reprieve in the heart of Jakarta.

Jakarta-based interior design and build firm Liquid (Living In Quality Interior Design), collaborated with Dymitr Malcew, a Singapore-based designer who has completed projects across Europe and Asia to bring Technigroup’s brief to life. Analysing Technigroup’s needs, they ideated around the overarching theme of industrial luxury, an ethos reminiscent of Technigroup’s own products. Dymitr Malcew delivered the schematic design, which was then developed and implemented by Liquid.

Liquid prides itself on being a one-stop service for interior design and build and its ability to provide quicker, more budget-friendly resolutions for its clients in a way of a one stop solution. Liquid was established in 2010 after observing a gap in the market for the integrated design-build approach. Since then the outfit has grown, but its mission has stayed the same – to give its clients the solutions they are seeking, in the most honest and open way possible. True to its people-centric approach, employees describe working at Liquid as a fun and unique experience. We sat down with Irene Tirtawidjaja, Commercial and Business Development Director, and Abby Kahuna, Design Director at Liquid, to dig deeper into their design process.

Designing the Technigroup office was a challenge that Dymitr and the Liquid team took head on. “As an industry player, Technigroup is no stranger to beautiful designs. They were looking for something totally unique,” Abby explained. “Taking industrial luxury as design inspiration, we thought about how we could create a space for them that was modern and luxurious, but also functional.” 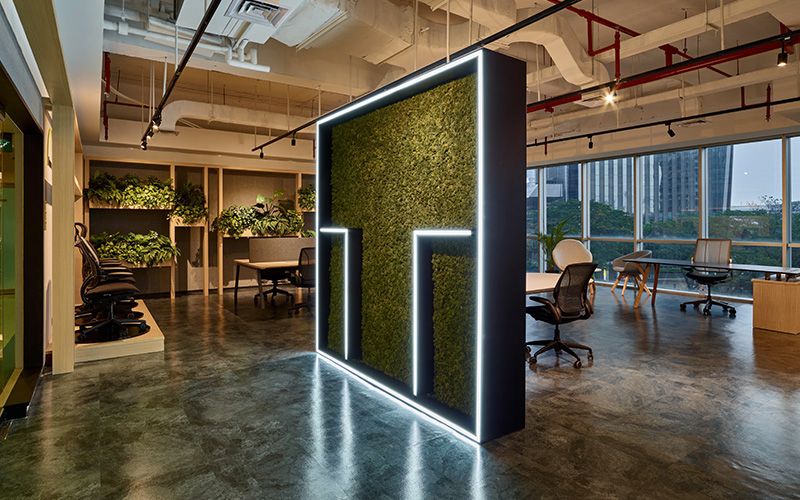 Taking industrial luxury as design inspiration, Liquid and Malcew have created an oasis for Technigroup in the heart of South Jakarta. Product shown: Natural Stones LVT. Photograph by Liquid. 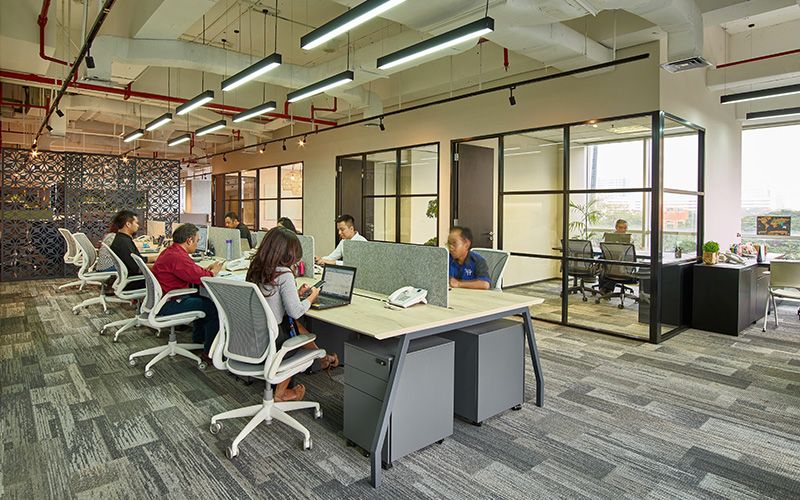 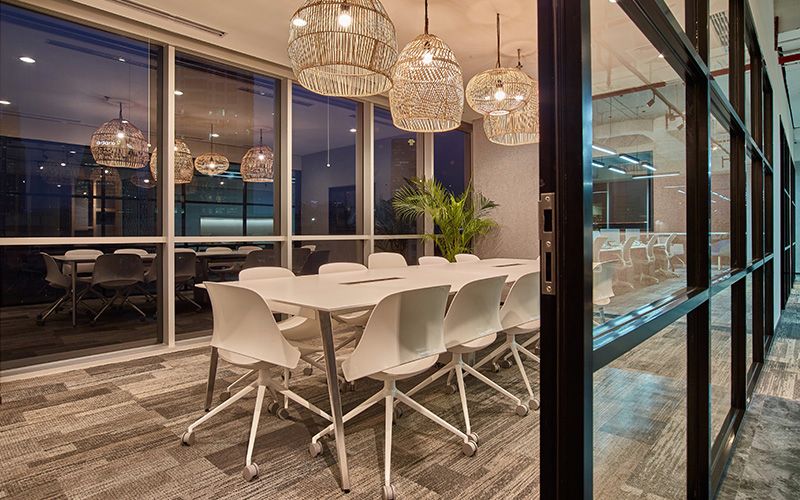 “Technigroup’s products are constantly evolving,” added Irene. “The interior design needed to be timeless, and enhance the showcased products without being overpowering.” According to Abby, Interface’s Aerial collection, specifically AE311 in Greige colourway, helped to create an industrial look and feel in precisely this ageless fashion. And our Natural Stones LVT in Cool Impala Marble was the perfect “hybrid of industrial sleekness and elegance” that the project needed. 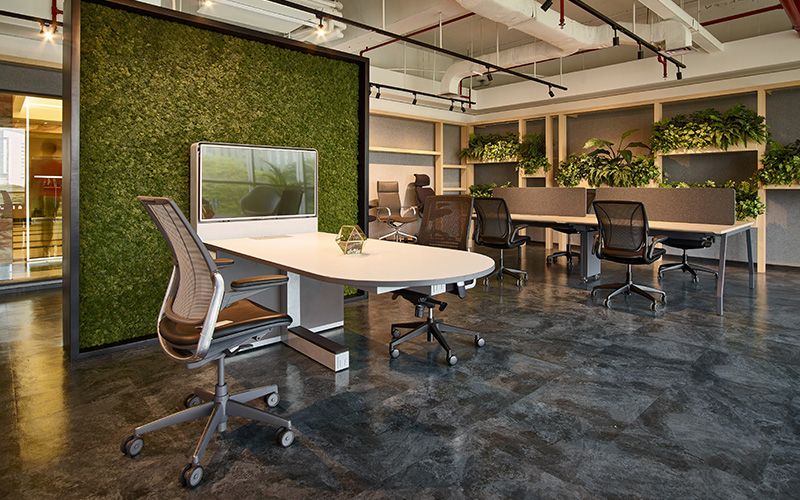 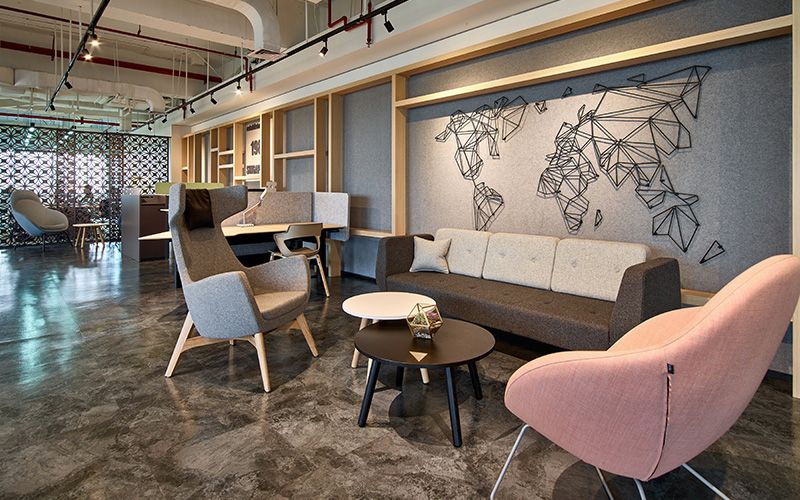 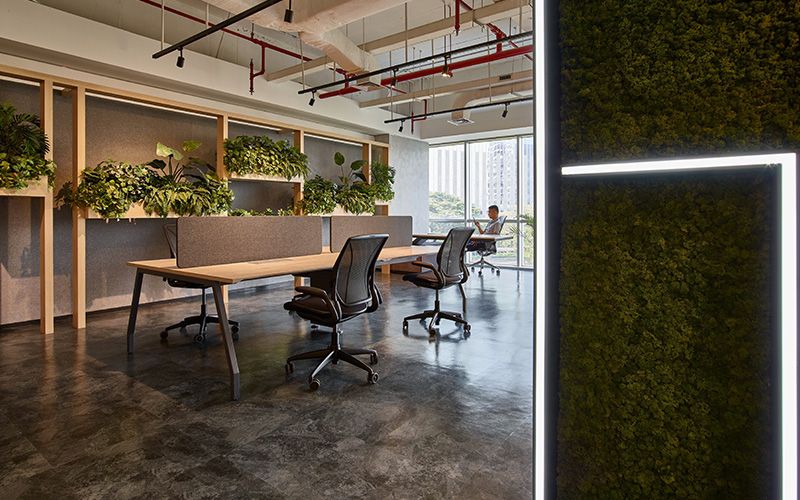 Interface’s proven track record as a sustainable manufacturer was the clincher for the design team. “We are concerned about climate change and its danger,” said Irene. “We like using Interface because we know that we are not harming the environment.” The fact that the flooring products that we sell – whether carpet tile, LVT, or rubber – are carbon neutral across their life cycle is one way Interface helps our customers to Live Zero. It’s been a key step towards Climate Take Back, our mission to run our business in a way that reverses global warming. “This was very important as climate change is one of Dymitr’s and Liquid’s key considerations,” said Irene. “At Liquid, we encourage our employees to bike to work, use less paper and move towards digital process – which especially important now that the COVID-19 situation has given us more of an impetus to work from home.” By using Interface carpet tiles and LVT in their space, Technigroup helped to prevent five tonnes of carbon emissions from going into the atmosphere – equivalent to the carbon emissions of a car travelling 19,685 kilometres, or driving halfway around the world!

Dymitr’s and Liquid’s commitment to minimising the carbon footprint of their spaces shines through in their design policies. The team avoided using uncertified wood in Techigroup’s office because of its high carbon footprint and negative implications on biodiversity protection, opting instead for High Pressure Laminates. Moving enclosed rooms close to the core allowed each user to get as much natural light as possible and reduce energy use. Dymitr and Liquid also make sure to incorporate elements of greenery into the spaces they design. “We found that having plants inside the office really enhances the wellbeing of the people working there,” said Abby.

The professionalism and reliability of Interface’s sales team have been the cherry on top of a fruitful, longstanding partnership between Liquid and Interface. “We have known Carol Sylvia, Business Manager for Interface in Indonesia for a long time and it is always a pleasure working with her.” Likewise, we are proud to have supported Liquid and Malcew in creating a cutting-edge workplace for Technigroup – a sleek, modern oasis that enables people to be happier, and our planet, healthier.

As countries begin to take tentative steps out of lockdown, we consider 10 possible implications for office life. Too early to be described as predictions, more as food for thought.