An excerpt from Ecopuncture: Transforming Architecture and Urbanism in Asia

This article is an excerpt from the book Ecopuncture: Transforming Architecture and Urbanism in Asia, by Nirmal Kishnani (www.ecopuncture-asia.com), published by FuturArc and sponsored by Interface. Yanweizhou Park is one of 16 projects featured that actively repair and regenerate. The book traces their rationale and impact, and demonstrates how each project can simultaneously benefit natural and human systems.

The annual monsoon often floods the banks of rivers in Jinhua City, located in eastern China. This aggravates conditions in an already crowded urban centre where social space has become a luxury, after years of intense densification. The Opera House that was built in 2013, at the confluence of the city’s rivers, offered a new civic space. However, being poorly connected to existing urban networks, it did not live up to the promise of revitalising the centre.

Yanweizhou Park (YP) was designed to address these failings. Completed in 2014, the park is sited on a 26 ha peninsula where the Wuyi and Yiwu Rivers converge to become the Jinhua River. Its form consists of a sprawling network of elevated pedestrian bridges emanating from a triangular patch of green.

The low-lying part of the site had been degraded over time by sand quarrying and was largely undeveloped. The wetlands here were restored, while riparian edges and habitats were added. This area has become a sponge, drawing flood waters into the ground. A little to the east, a new pond was created, and the bridges were put in place to link YP to the city. They bifurcate and swirl down into the landscape, taking visitors to the water’s edge. 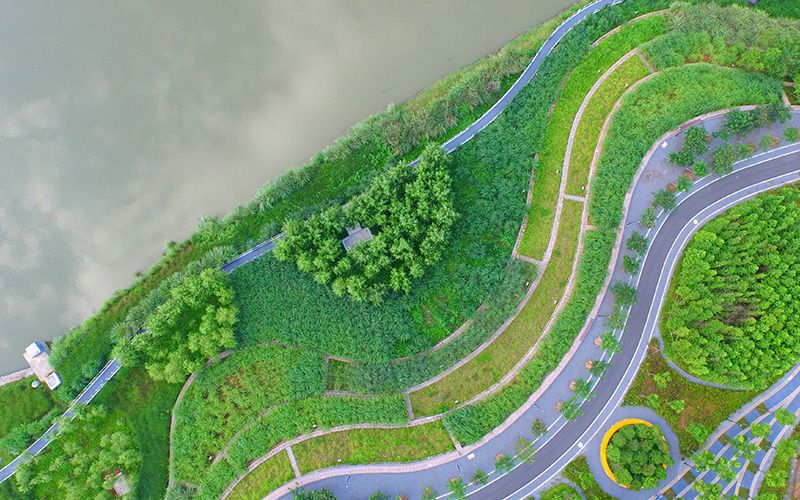 This park is exemplary of China’s Sponge City policy, a brainchild of Yu Kongjian, YP’s lead designer. His mantra making friends with the flood ushered out hard-edged embankments, once seen as the only way to contain inundation. In YP, Yu has used landscape strategies to limit flooding. In the process, a riparian ecosystem and public attraction were created, the latter thriving on proximity to Nature and the spectacle of seasonal floods.

Retaining what was left of the wetlands, YP has enhanced and expanded the riparian edges of the site, using the existing sand quarries to create a micro terrain. On higher ground, the park is more formal, with pathways and pavilions set around a pattern of circular bioswales and green pockets. All combined, the total surface area of the park is now 100% permeable, and covered with more than 12 plant species. These landscaping strategies have increased fauna onsite, drawn to new habitats and clean water.

Flood-tolerant wetlands along the terraced embankments enable water absorption, and provide a buffer for higher ground. When inundations occur, these areas are fertilised by the incoming flow and silt deposits.

During non-flooding periods, stormwater from the upper levels of the park cascades into the river. These terraces filter and clean the runoff. Gravel pathways, bioswales, and tree planters also increase groundwater recharge. The inner pond, filled with cleansed river water, is fit for swimming. Based on YP’s hydrological model, the peak flood in the area is reduced by over 60%.

With its network of bridges, YP connects the two halves of the city, once divided by the rivers. The Opera House and its plaza are now highly visited with an average of 40,000 people/day. Land on either side of the plaza has been slated for an upcoming science museum and youth centre.

The bridges have been elevated above a 200-year flood event level to ensure uninterrupted public access.
Ramps extend into the wetlands, bringing visitors into the riparian landscape. These areas are inaccessible only for the duration of the floods, but otherwise can be reached 24/7. 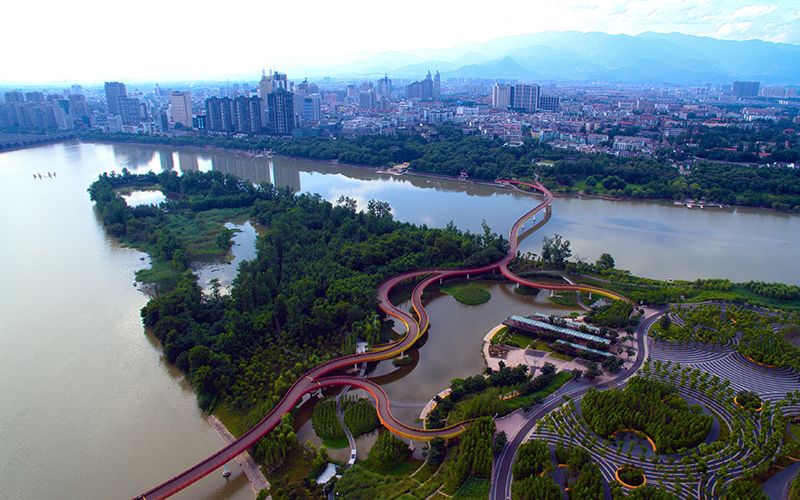 The overlay of bridges and public space onto ecological patches creates an immersive biophilic experience with qualities of prospect, mystery, and refuge. It offers two contrasting perspectives: wild nature along wetlands, close to the water’s edge; and formal nature on higher ground, close to the Opera House. The plaza here is organised around circular bioswales, and punctuated by pavilions in small alcoves.

The edge between river and park is the most striking example of systemic integration, acting as habitat, floodplain, and recreational space. The networks within YP have become subsystems within the wider systems of the area. Its pedestrian and public space networks defragment the broader urban condition, once divided by the rivers. Its green cover brings to the city an important new ecological core, while the water features and floodplains have reshaped its hydrology.

The park has sought to enhance human capital by creating a biophilic space for the residents of Jinhua City, helping them to reconnect with Nature. It has generated social capital by transforming a derelict, underused site into a vibrant, multifunctional space for the community. It has restored natural capital by repairing riparian ecosystems, and curbing flood risk. 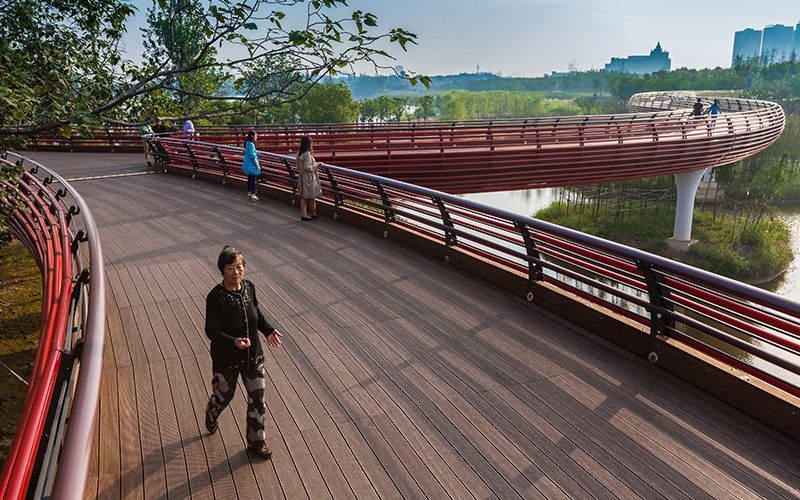 Its success has made it an iconic development in China, having been extensively covered by the Chinese media. Its inclusion in Build Beautiful China, a handbook for Chinese government officials, is noteworthy. It is used here as a blueprint for effective flood management techniques. The project foreshadows China’s call for an ecological age, offering symbolic capital for urban livability and ecological restoration.

Established in 2004, RNT Hotels runs more than 40 hotels throughout Japan under the Richmond Hotels brand. The group also manages restaurants, cafeterias and coffee shops. Opened in 2019, the Richmond Hotel Tenjin Nishi Dori is a new construction in Fukuoka City on the north coast of Kyushu Island. RNT’s design brief for the interior…

As we design a new path forward, creating safe, hygienic, and well-maintained spaces will be a key priority for business leaders. By addressing the concerns and needs of space users as they return to a new working normal we can realign workplaces now, to enable teams to thrive tomorrow.