Grandmilliennial Style: Tradition with a Twist

Whether inspired by new directions in fashion or disenchanted with the impersonal look of the minimalist interiors that dominate the feeds of so many design influencers, a countervailing nostalgia-fueled aesthetic known as “grandmillennial” style has been on the rise in recent years, making an impact not only on residential interiors but also on various commercial settings—from boutique hotels and trendy restaurants to creative agency offices and healthcare environments. Also known as “granny chic” and coined by journalist Emma Bazilian in a story that appeared in House Beautiful magazine a couple of years ago, the grandmilliennial movement isn’t so much a trend as it is an evolution of a traditional point of view sparked by proponents of the aesthetic as they embraced the slower pace and creature comforts of home during the pandemic. And as the workers who favor grandmillennial style gradually return to the office, it’s clear that many of the old-school elements—like lively colors and big floral patterns—that characterize it are bound to come along with them.

What are hallmarks of grandmillennial style?

The movement has been slowly gaining steam ever since fashion visionary Allesandro Michele took over as creative director at Gucci half a dozen years ago, when he began redefining modern glamour with some maximalist inspiration from the mid-1960s and 1970s and adapting it for contemporary life. Like many trends that start in fashion, the movement has also taken root in home decor with more contemporary spaces now sporting an eclectic mix of traditional elements like chintz fabrics, chinoiserie wallpapers, Victorian furnishings, vintage rugs, rich colors, and frilly details. “Big, bold florals as well as toiles are among the patterns favored by advocates of the aesthetic, as are the patterns of vintage rugs, such as a classic Oushak,” says Fiona Westmoreland, director of strategic portfolios for Interface®, who points to the Ou La La™ product from FLOR® as an example of the kinds of patterns that align with the style. 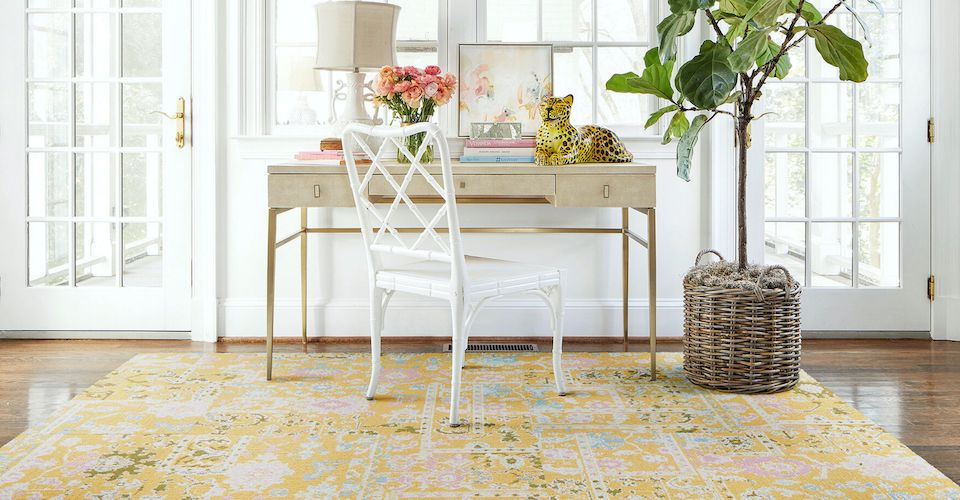 As the term “grandmillennial”—which applies to both the style and those who relate to it—suggests, the movement is rooted in the work of legendary designers like Mark Hampton, Sister Parish, David Hicks, Rose Tarlow, and Albert Hadley, yet it has been embraced with a youthful spin by designers of the Millennial generation like South Carolina-based Whitney McGregor or New York-based Lisle McKenna, who a bring a contemporary vibe to their rooms with fresh colors, modern accents, and offbeat eclectic flourishes. Katherine Cohen, manager of visual merchandising and photography for Interface, points to product designers like Caitlin Wilson as well as to both mass-market and luxury brands and retailers – ranging from Target, H&M, and Apiece Apart to Cinq à Sept, Ballard Designs, Bergdorf, and Anthropologie – as longstanding proponents of the style, noting the fresh approaches they bring to traditionally-inspired design. “Brands like these have always done a great job of combining classic elements with modern influences,” she says. “Those who relate to the style gravitate to tradition and are inspired by the romance of nostalgic things.”

Given the fact that workers in the Millennial generation are moving toward the peak of their earning and spending power—as well as their influence—in the world, creating spaces that align with their tastes and values makes pragmatic sense. According to recent reports by human resources and career development sites, such as LiveCareer or the HR Exchange Network, this generation also comprises the bulk of today’s workforce and will remain the dominant demographic in the workplace for years to come, as Baby Boomers and Gen Xers move toward retirement and younger workers filter in. Profoundly impacted by the worldwide effects wrought by the pandemic, these workers clearly see that the patterns of both working and living have forever changed. And viewing the world through a new lens, many see the inviting grandmillennial style as an appealing antidote to the restraint of the mid-century modern interiors that have prevailed for many years, regarding it as a truer reflection of their point of view. To retain this workforce, employers see the value of responding to their needs by creating environments that embody their attitudes and ethos. 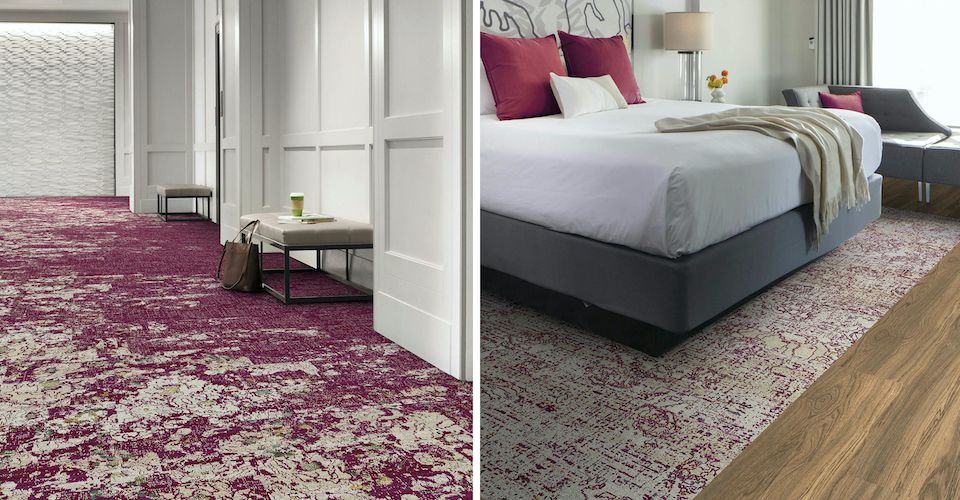 Where grandmillennial looks are appearing.

Aside from its emergence in everyday apparel and home decor, the style can also be seen a range of commercial settings, such as boutique hotels, social clubs, restaurants, and creative or co-working environments. But experts see variations of the style emerging in the years ahead in corporate and workplace settings, like advertising or tech offices, and other commercial contexts, too. “What’s interesting is that, over the past few years, market segments seem to be merging with influences crossing over from hospitality to corporate to healthcare,” says Westmoreland. Cohen sees the movement as an extension of a broader trend toward a homier, warmer interiors in the workplace reflecting a “resimercial” concept that has now become commonplace. What sets grandmillennial spaces apart from traditional interiors of decades past, she says, is that they are more playful and accessible than the those designed and occupied by their predecessors. “It’s not traditional in the sense that your recreating looks of the past, it’s traditional with an edge,” says Cohen. “Think floral or chintz patterns in modern, bold colors.”

How to incorporate grandmillennial style.

While Westmoreland and Cohen expect growth in the movement across all market segments in the coming years, they acknowledge that some commercial environments lend themselves more naturally to the aesthetic than others. As such, rather than a full-on commitment to a boldly patterned wallpaper or carpet throughout an expansive office setting, they envision designers making nods to the style with modified or limited gestures. “You might see a designer using a bold wallpaper in a reception space or a patterned rug in a seating area or lobby,” says Westmoreland. “Installing a tonal floral carpet versus one with multiple hues is another way to introduce pattern with restraint in, say, a conference or breakout room.” Alternatively, Cohen believes designers might choose to introduce a pop of pattern with upholstery on a limited set of lounge chairs or cushions, for example, and contrast it with a neutral flooring as a more restrained backdrop in a large office setting. “Using an LVT flooring with a concrete finish or an antique oak look with a whitewash or darker finish – like those in Interface’s Level Set™ collection, for example – against touches of floral pattern creates that sense of new-meets-old in a way that’s fresh and clean,” she says, noting that carpets with smaller scale patterns or natural textures can work well with this approach. 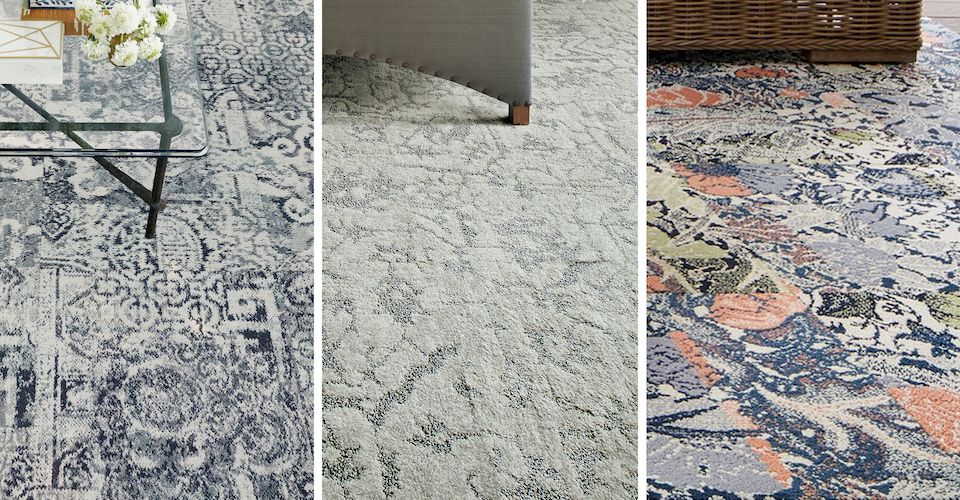 From Left to Right: FLOR’s La Chinoise, Mined and Yours, and Among the Wildflowers.

Ultimately, Cohen and Westmoreland see the grandmillennial movement gaining strength for the foreseeable future. And like many designers, they see patterned carpets, and especially vintage or vintage-inspired rugs, as a great way to add color and pattern into a space. Even using patterned rugs in a limited way, such as pairing one of FLOR’s grandmillennial styles like Mined and Yours™, Among the Wildflowers™, or La Chinoise™  with a larger jute or sisal-look carpet, like those found in Interface’s World Woven™  collection, can go a long way toward setting a grandmillennial tone. “Vintage furnishings or rugs that echo vintage styles help inject a spirit of storytelling to spaces, and make it look as if you found an object here and pulled another from an attic there,” says Cohen. “They make a space feel curated over time and allow people to emotionally connect in ways that are reassuring.”