If you’re going to do something, do it right.

When Library Director Loren Pinkerman came to LaGrange College, he immediately began lobbying for a new building. After 40 years and substantial growth in the student body, it was time. One of former President Stuart Gulley’s primary directives? Make it LEED certified.

For help planning the building, the school went to Jay K. Lucker, a former Director of Libraries for MIT who has served as a library building and management consultant to numerous universities and colleges, to work with real estate developer Partners Development. And with additional help from sustainable building consultants Southface and Holley Henderson of H2 Ecodesign, a LEED Silver building was born.

Kevin Matherly, VP, Project Management for Partners Development says, “Dr. Gulley was moving the college toward a more sustainable campus overall, new buildings, existing buildings, sustainable living in general. LEED was the most well-known green building rating system at the time. Southface was brought in on the front end to do a quick study, which became the basis of the design created by Perry Dean Rogers of Boston, MA.”

During the planning phase, the college held a comprehensive workshop to help orient contractors to the green building process. According to workshop leader Holley Henderson, “One of the most remarkable things about this project was that many of the local subcontractors had never participated on a LEED project. They were excited about it and put extra efforts into making LEED Silver a reality. It all came full circle from a president’s vision to the people in the trenches who made it a success. Of all the project types we do, a higher education library is one of the most rewarding because it has the potential for such outreach. Think of all the open minds it touches!”

To make sure this new, technology-driven facility fit into the campus, Perry Dean Rogers took photos of all the buildings on campus and incorporated their architectural features into a contemporary design. Says Pinkerman, “They did a great job of that and with the overall space in here. The large windows create so many beautiful views and it makes the library a very comfortable place.”

The Results Are In

The Frank and Laura Lewis Library achieved LEED Silver in late 2009. The library’s green features will offer lower operating costs, a healthier work and study environment and less solid waste for local landfills, which all translates to a better quality of life for LaGrange College and the greater community. One of the many features that played a role was the Interface carpet tile used throughout the space. Henderson says, “H2 Ecodesign facilitated the entire project team for all sustainable decision making centralized on LEED. The specifications included low-emitting, recycled content and regional products – the Interface carpet tile was a great contribution to all of these aspects of green design.”

According to Director Pinkerman, it’s also nice to look at. “It’s very lively and doesn’t look institutional. The design team brought us several [carpet tile] options to choose from and we really liked the color and design of the most prominent tiles on the floor. It breathes life into the place and we’ve been pleased with it.” 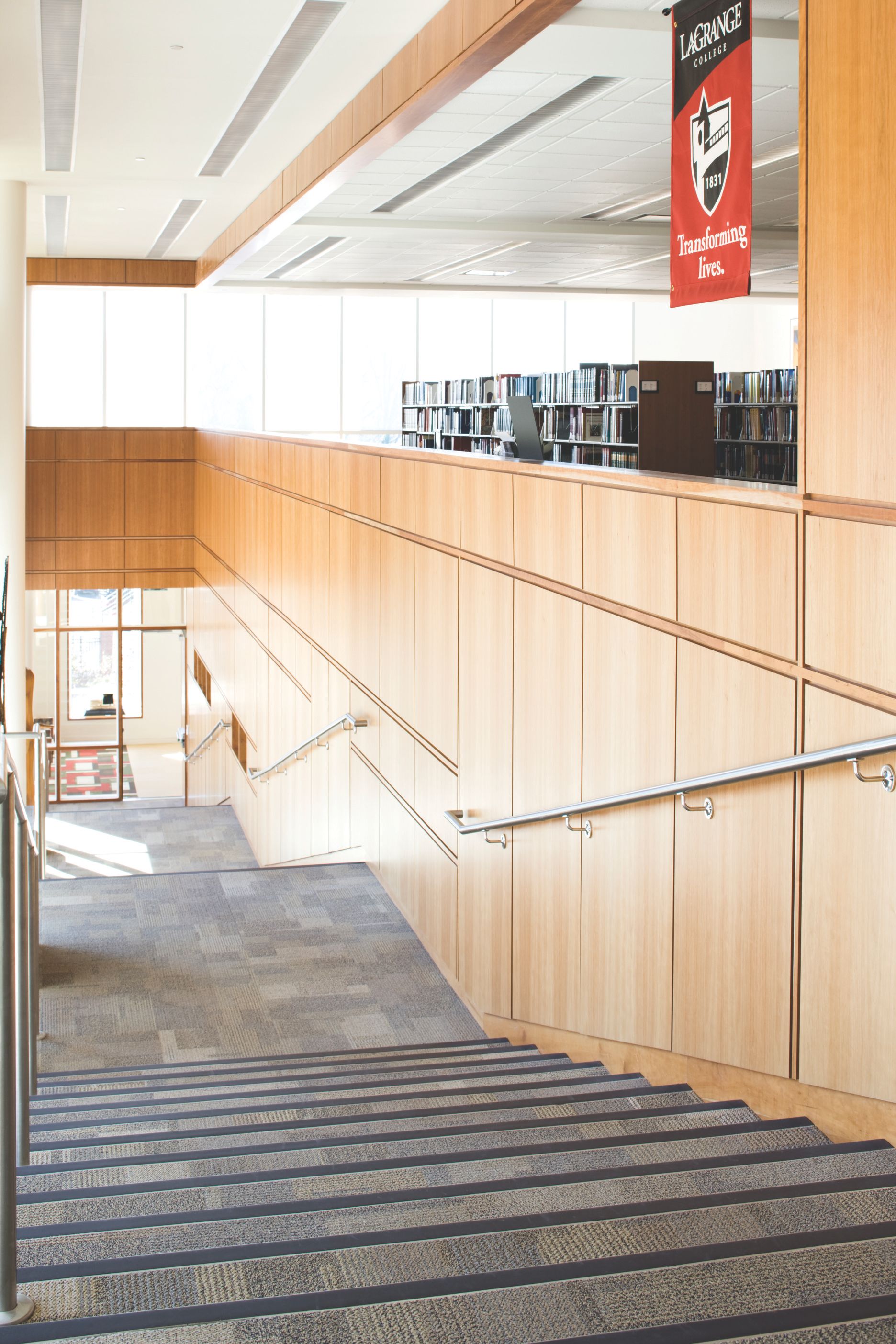 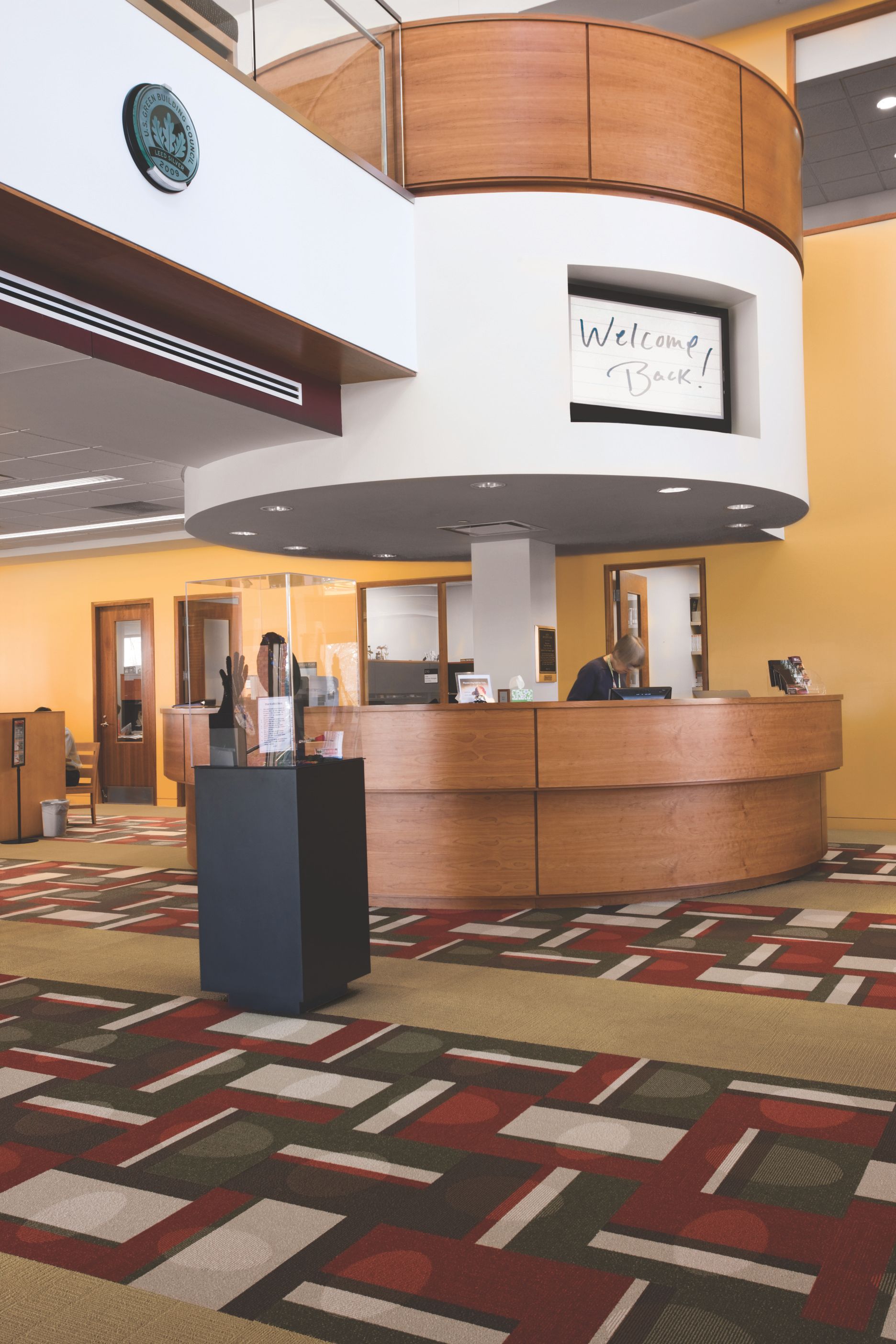 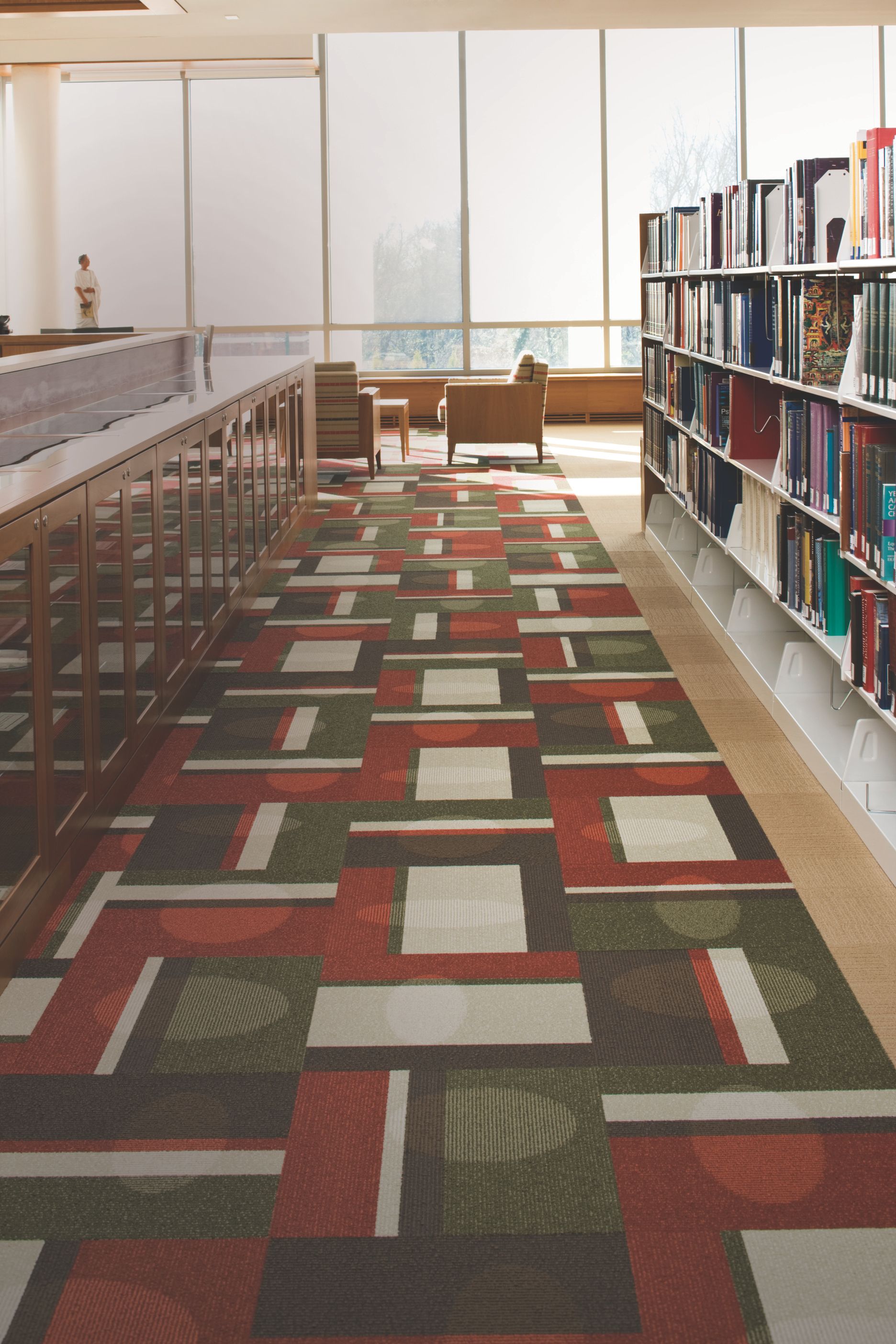 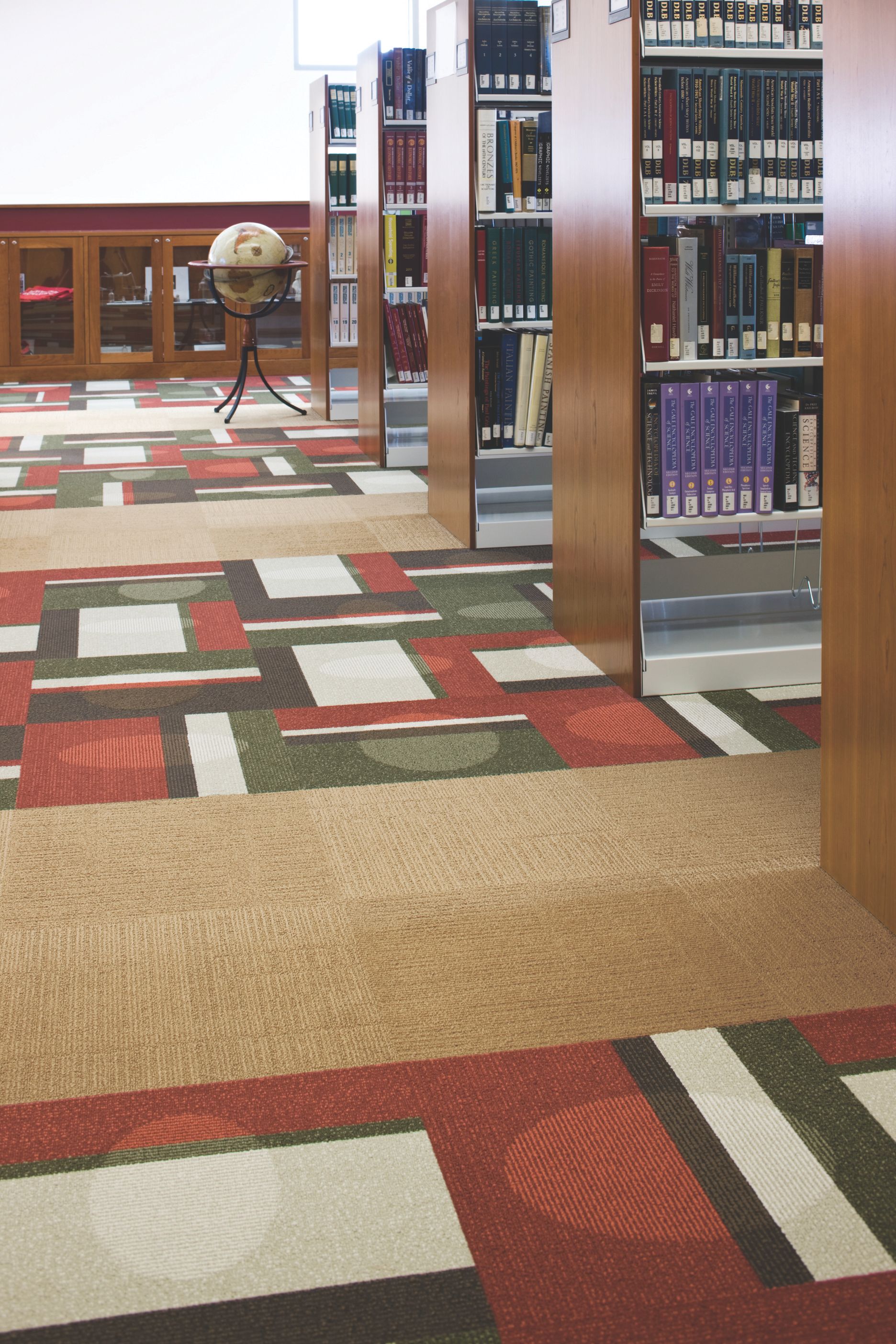 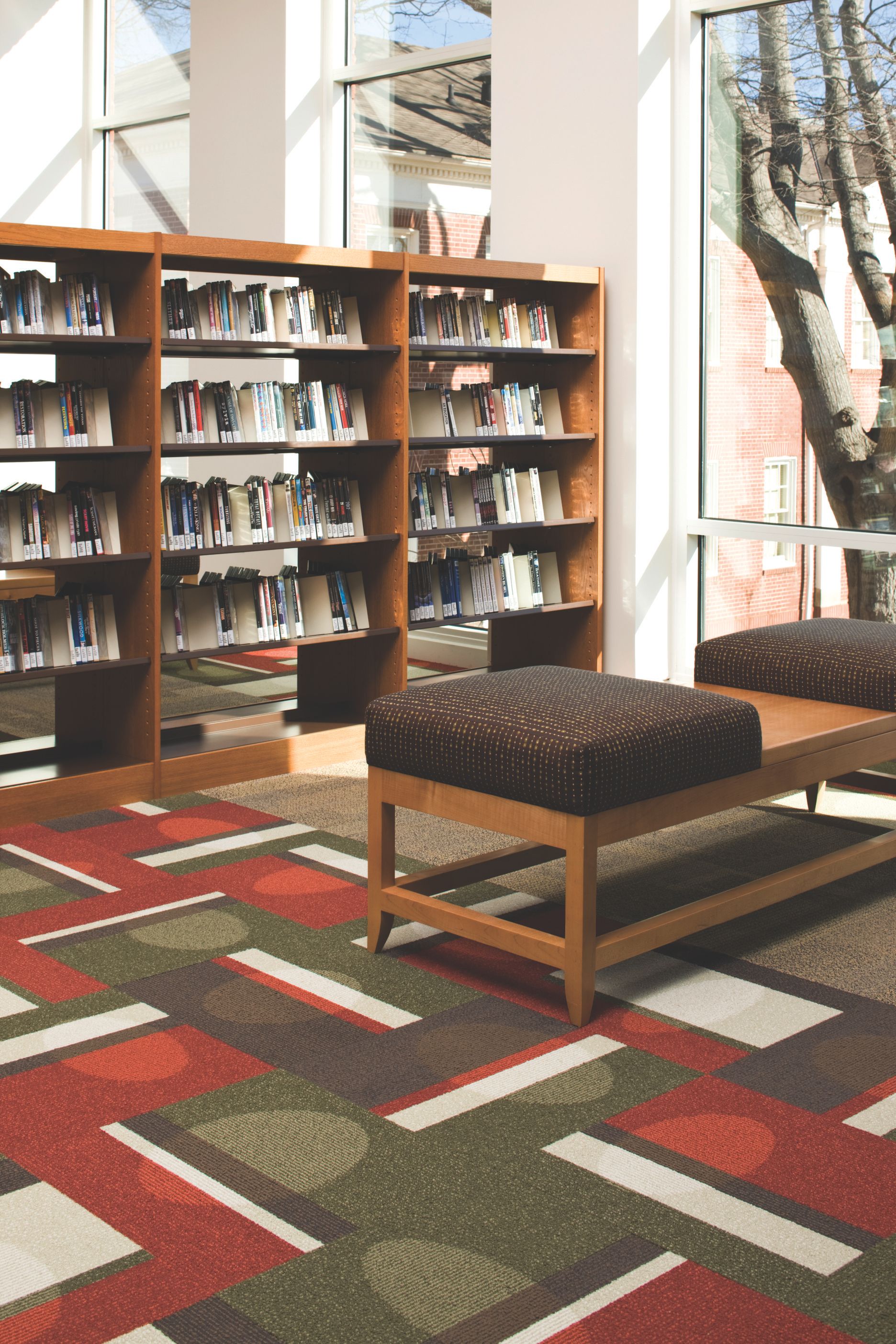 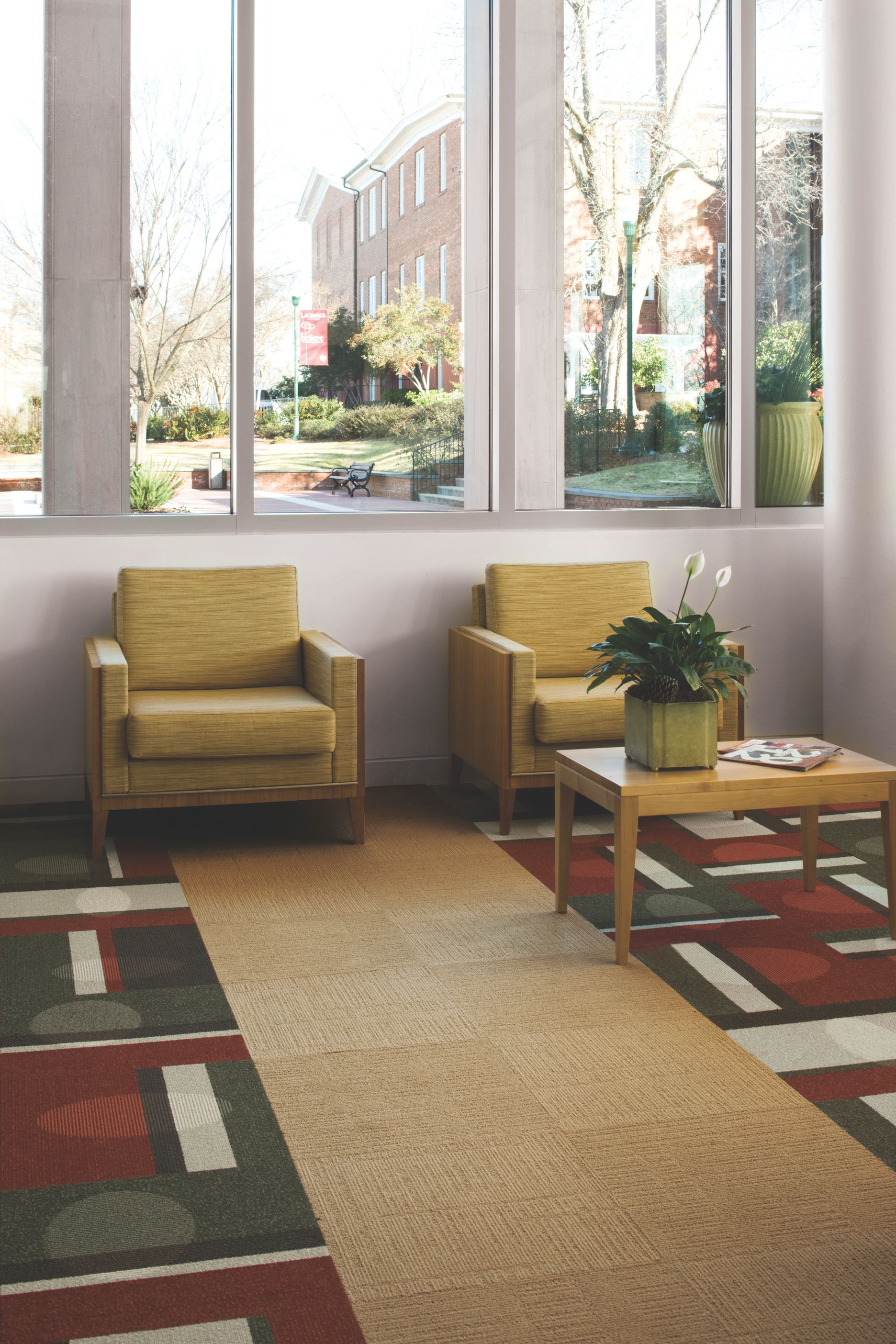 Another benefit? It’s easy to replace. Pinkerman recalls an incident just one month after they moved in. “A slow leak developed where the two roofs joined together and caused some minor flooding. We had waste baskets everywhere. Despite the water, we only had to replace one of the carpet tiles and it was no problem.”

Build It and They Will Come

The real measure of success, however, is how well the library is used. Thanks to the additional space and availability of electronic resources, students now have access to nearly 400,000 holdings. “We have some huge collections. We’re the only small liberal arts college in the United States to have Gale’s Sabin Americana, 1500-1926, a collection that covers the whole western hemisphere from 1500 to the 1920s. That’s been a huge boost. “

And the space itself is more inviting. He continues, “In the old library we had stuff jammed everywhere and there was too little space to study. It was also the furthest building from the dorms, so it wasn’t easy for students to get to. Now we have a central location, small study rooms, a 24-hour study space, SMART classroom technology and an auditorium with videoconferencing to name just a few things. We also have a central location that has made a big difference. After one year in this building, we doubled our gate count.”

Can a built space not only have a positive impact on those who occupy it, but also on the environment outside the building? We believe the answer is yes. Buildings of the past simply focused on the function and aesthetics of a space. As construction processes evolved, it became apparent that some of the development,…

How the Next Generation is Tackling Global Warming
Event

How the Next Generation is Tackling Global Warming

In November of last year, we announced our support of a student-led competition inspired by Paul Hawken’s Project Drawdown, which identifies 100 of the most substantive solutions to reverse global warming. A panel of judges from Net Impact and Interface recently judged the projects and found four projects to be outstanding, all in the field of food waste or regenerative agriculture.