Before you make a decision, you first need data.

For the Base Camp redesign project, it made no sense to start rearranging furniture, tearing down/putting walls, or putting new behavior protocols in place until we had direct input from those who used to work in the building every day. And with COVID-19 lingering into the second half of 2020, we wanted to get a snapshot of how employees were currently feeling and working, their concerns about coming back into the office, and the aspects of Base Camp they miss the most.

Getting the right data

Gathering all this information meant — you guessed it — surveys.

We know how much employees love filling out internal surveys, so we carefully crafted a series of non-overwhelming questions that would give the best idea of employee perspectives at any point in time. It would also give the core project team good quantitative data to make decisions from, which we can compare over time.

Some questions we wanted to answer:

After we deployed this first survey in June, we partnered with Steelcase on a focus group of select Base Camp employees. This group represented various departments and work types — those who had dedicated desks and those who were work choice. Their feedback gave more context to how people used to work in the office and what they would like to see when they return. 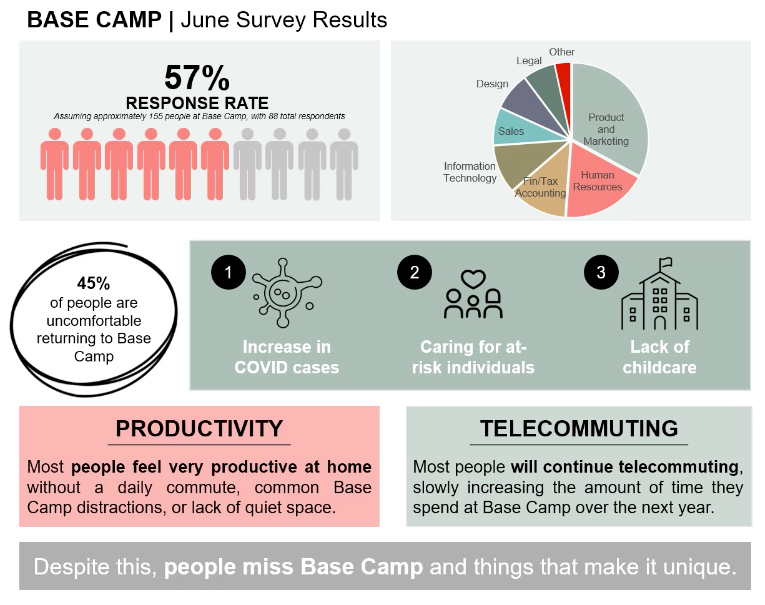 Of the 88 employees who answered the initial survey, we saw 45% of them express discomfort with returning to Base Camp in the short term. While we’ve put in place plenty of interventions at Base Camp to make it safe for employees and customers to be in the building safely, this told us that we still have more work to do.

At the same time, most Base Campers feel productive at home — which was a relief, since that was not the normal working mode for Interface as a whole. Since 84% of those surveyed felt their work isn’t dependent on them being in the office, we assume that most people will continue telecommuting and slowly ease back into the office over the next year.

Of the 168 employees who work from Base Camp, this is what we can expect:

Having those numbers gives the core project team a clear idea of density around the office at key points in time, which influence what interventions make the most sense.

So, what are the concerns? Most employees weren’t sure about trusting their coworkers to remain vigilant to COVID-19 when not in the office. The focus group responses corroborated this: “Not knowing what people are doing outside of work is a nebulous fear.” Beyond the people inside the building, aspects of the building itself created some trepidation. For example, the open spaces around Base Camp that encourage movement and interaction were identified as risky.

Despite these concerns, people miss Base Camp. They miss socializing face-to-face, being close to their team, and the spontaneous collaboration facilitated by the building’s design. Ultimately, employees want to preserve much of the open features within the building — even if they have concerns about using them regularly.

The focus group responses echoed this same conflicted feeling about the old way of working together in Base Camp:

“It will be kind of hard to get that collaboration back. A lot of collaboration comes from movement. I don’t see people being as comfortable bouncing from space to space in a post-COVID workplace. You can get it back, but you will have to be more formal about it and pay attention to it.”

This presents an interesting design challenge for the core project team. How do we come up with solutions that balance concerns about interacting with others while preserving the original design intention? 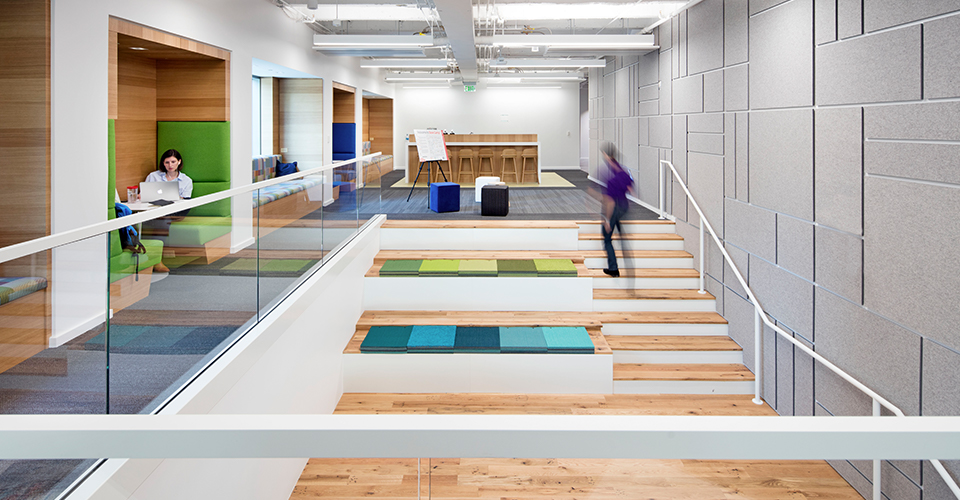 In a building designed for movement and interaction, how does Interface make design changes in response to COVID-19?

The qualitative and quantitative data gives the project team some clear ideas of how to keep the project moving. Not only can we calculate Base Camp’s likely capacity over the next year, it also provides guidance on how to address employee concerns and highlight safe behavior expectations as we plan our redesign and reentry.

After all, we want to make sure everyone is on board if we want this effort to be successful.

For other organizations considering the same kind of changes, there is no universal right answer. As far as Interface is concerned, this data gives us hard numbers that support the next step of the redesign process: space planning.

As anyone involved in a commercial construction or design project knows, it’s not a simple A-to-Z process. There are budgets to consider, stakeholders to involve, and let’s not forget that an ongoing global pandemic brings health and safety to the forefront of every discussion. We know that Interface isn’t the only organization thinking about COVID-19’s implications to our built space, but we think it might be helpful to publicly chart our process in hopes that it might help others.

Our company is driven by much more than the products we deliver … Our mission to run our business in a way that is restorative to the planet. Our constant sense of exploration and innovation to design a better way. And most importantly, while developing the plans for Base Camp, our commitment to creating +Positive…