During the biggest climate week event in the world, the focus was clearly placed on the drive toward even greater climate action – with collaboration among governments and businesses. As part of September’s Climate Week in New York, the UN Secretary-General held a Climate Action Summit that called for world leaders to bring forth “concrete, realistic plans to enhance their nationally determined contributions by 2020, in line with reducing greenhouse gas emissions by 45 percent over the next decade, and to net zero emissions by 2050.”

This year, overwhelmingly, activists and journalists alike held world leaders’ feet to the fire around action. Who could forget teen activist Greta Thunberg’s moving speech to the UN General Assembly? And while it may seem as though governments have not done enough, we left Climate Week feeling hopeful and inspired by the myriad business commitments and plans to accelerate net zero and carbon negative action, including companies within our own space – the built environment.

Companies across a multitude of industries made commitments to carbon reductions, including energy corporations – who have the most the opportunity to make the most impact on carbon reduction across all sectors by transitioning our economy away from energy powered by fossil fuels. Encouragingly, multiple energy companies aligned their science-based carbon emissions reduction target to the 1.5 degrees Celsius trajectory, including NRG Energy, whose CEO Mauricio Gutierrez spoke on a CDP panel with Interface CEO Jay Gould around innovation and urgency in the face of climate change. Similar to Interface’s sustainability story, in which a customer question spawned a 25+ year sustainability journey, energy customers are driving innovation at NRG.

“Our customers want custom and clean power, with options, smart devices, more control. But this is an industry that traditionally does not place customers at the heart of business decisions,” said Gutierrez.

Ærsted, a Danish power company also aligned with the 1.5 degrees Celsius trajectory, will be coal-free by the end of 2022 and carbon-free by 2025, according to Rasmus Skov, head of sustainability at Ærsted. Skov spoke on a UN panel on localizing global goals to meet business objectives, along with representatives from Salesforce and PRI.

And energy wasn’t the only industry committing to bold emissions reduction goals. Companies and organizations in the built space made aggressive commitments around carbon, as well. Gensler, the world’s largest architecture firm, announced its intention to fast track its carbon neutrality goal to 2030. With its whole portfolio carbon neutral in its operations, the firm’s work would save 21.5 million metric tons of CO2, equivalent to keeping 5 million cars off the road every year.

For many in the built environment, embodied carbon, or the upfront carbon associated with building, is a key lever for reducing their carbon impact. The Carbon Leadership Forum recently announced the development of the Embodied Carbon in Construction Calculator (EC3) tool, to help specifiers easily compare and evaluate the carbon footprint of the building materials and products used in their projects. Additionally, the week after Climate Week, Architecture 2030 hosted the Carbon Positive Summit. Convening 50 Architecture, Engineering, Construction (AEC) and planning firms, AIA Large Firm Roundtable, and other key professionals responsible for well over one trillion dollars of global annual construction.

The summit’s goal was to gain support for building sector emissions targets that dramatically increase the odds of meeting the Paris Agreement 1.5 degree C goal. Architecture 2030 presented a few goals to leaders, including reducing embodied carbon by 40% as soon as possible. They also challenged these leaders to provide solutions for zero carbon emissions for the built environment by 2040.

This call for a 40 percent reduction in embodied carbon will require substantial engagement with vendors and suppliers, but the built environment isn’t the only industry that needs collaboration within the supply chain. Salesforce, for instance, while having their own science-based goals, also mandated their suppliers create goals by 2024, in order to reach the company’s sustainability goals, according to Patrick Flynn, head of sustainability at Salesforce.

While it certainly will take collaboration of businesses, suppliers and governments to reduce emissions, consumers and buyers do have power, as evidenced by NRG’s decision to innovate. Our buying power makes a difference, and we should demand recyclable and low-carbon products from companies working toward a goal to stop global warming.

During Climate Week, Interface took our Climate Take Back™ commitment to many stages in New York and Chicago, sharing our ambitious mission, along with our desire, through product innovation and action, to drive significant carbon change in our business, as well as the entire built environment: 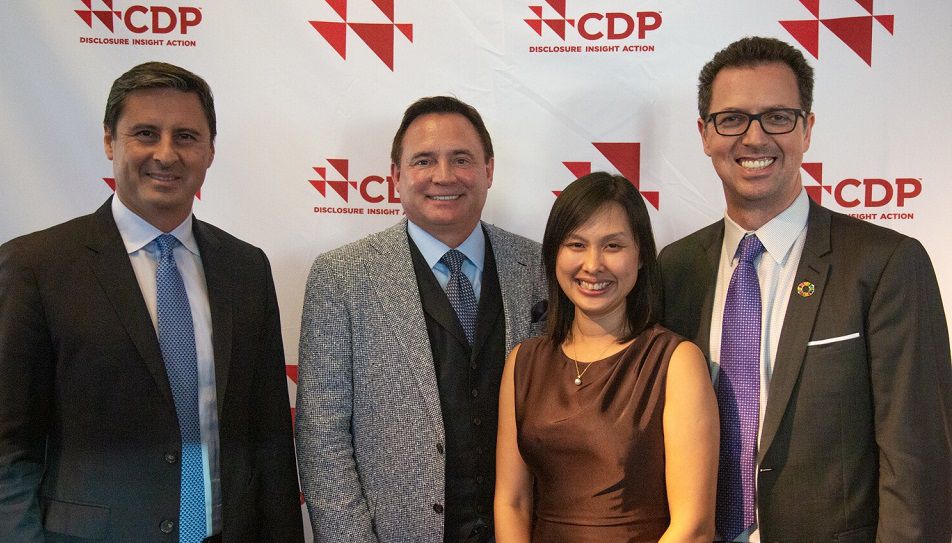 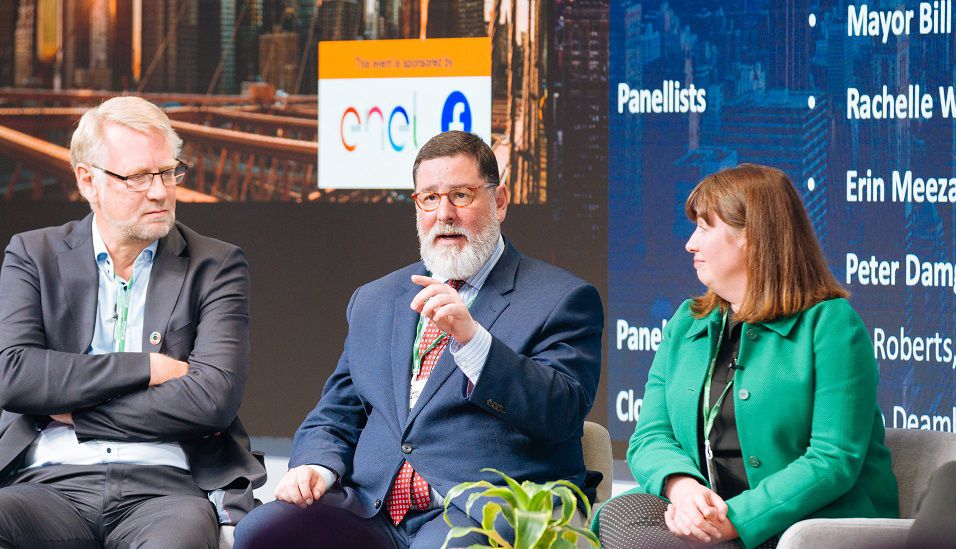