Our recent Human Spaces study into the impact of the work environment on employee well-being asked more than 3,600 office workers what mattered most to them about their workspace. One of the questions we asked respondents was “What was the top natural element that European office workers would want on their modern office wish list?”

Other elements that made it into office workers’ Top Five list were: 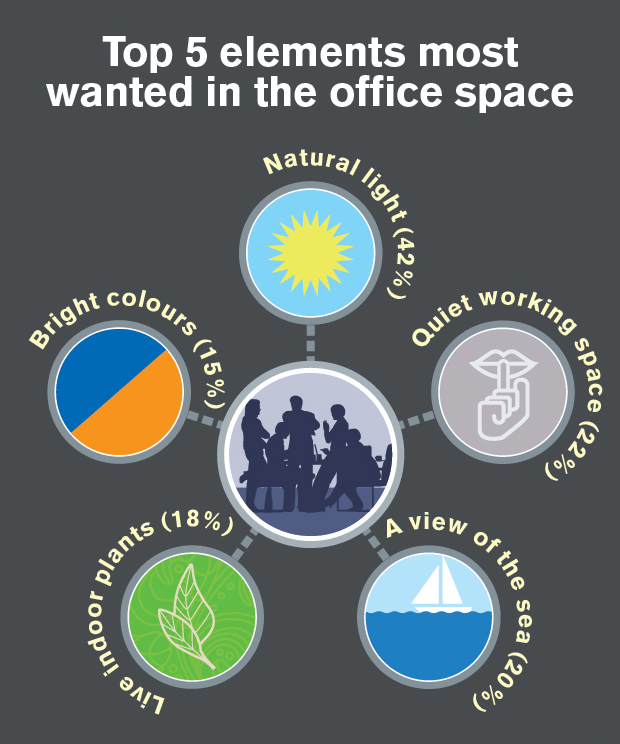 As such simple, basic requirements, we often forget the importance of sunlight, and other natural elements, to human well-being. This is especially true in the workplace, where traditionally we have simply focused on issues of hygiene and health and safety – important factors, but not the only elements affecting happiness at work.

A connection to natural systems

In his 1984 book, The Biophilia Hypothesis, the theorist Edward O. Wilson suggested that there is an instinctive bond between human beings and other living systems, a yearning to be closer to nature, not just by spending time outside, but by bringing the natural world indoors. According to this theory, then, workspace design that takes inspiration from this natural sympathy between humans and nature will help improve worker health and happiness, in turn leading to more productive workforces.

Studies, such as the Human Spaces report, are increasingly demonstrating the truth of Wilson’s hypothesis, showing the positive impact of biophilic design on worker performance. Creating office spaces that take this yearning for nature into account will ensure that employees are not just healthier and happier, but more productive and creative as well. This will have benefits for the businesses that employ them, improving their output and, ultimately, their market success – leading to a happier outcome for all.

Having just finished interviewing senior executives from a range of organisations for a Global Leadership study, and I am struck by the consistency in perspectives even though the organisations are quite different. Every CEO I have interviewed ranks their number one challenge today as dealing with the pace and scale of change now upon us.…