Wander through a major hospital in any modern city and a single visual element is likely to dominate the space: nature art is everywhere! 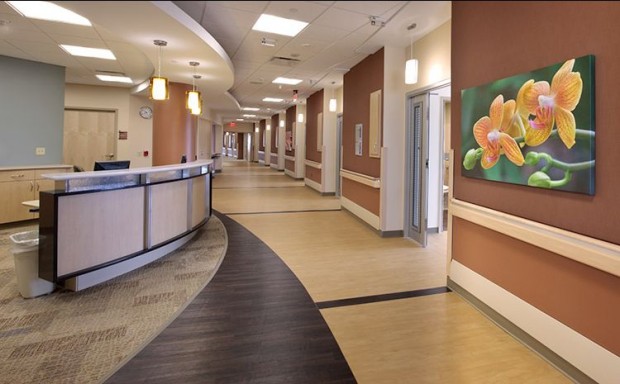 It’s been over 30 years since Roger Ulrich’s trailblazing study on the effect of window views to nature on patient recovery. His seminal finding that post-surgery gall bladder patients had faster recovery rates, needed fewer pain killers, and had fewer post-operative complications launched the field of evidence-based design.

During that same period, in enclosed areas of the hospital where windows to a natural exterior view were not possible, interior designers quickly turned to nature imagery—whether in photography, artwork, or graphics—to fill the gap.

Since then, the incorporation of nature art in healthcare settings has become known as evidence-based “positive distraction,” a term that’s defined as “an environmental feature that elicits positive feelings and holds attention without taxing or stressing the individual, thereby blocking worrisome thoughts” (Ulrich 1999).

In other words, the restorative impact of nature art was attributed to the emotional response it elicits due to its representational or symbolic properties. And this affective attribute in turn was valued because, according to neuro-scientific studies, the emotional response is immediate and can occur before other higher-level cognitive responses (Nanda 2011).

Interestingly enough, until recently, neither the designers of nature imagery nor the researchers involved in dissecting the visual properties of nature art have considered the cognitive and clinical implications of introducing a much more profound visual phenomenon—biophilic illusions—in healthcare settings.

Biophilic illusions are a powerful phenomenon that alter the established nature imagery calculus, not only in terms of how illusions engage the organs of perception, but also in how they can be designed to affect our psycho-physiological response to enclosed interiors—in a manner that leads to a much deeper, positive health outcome.

Unlike representational nature images, optical (biophilic) illusions have an added dimension. While they provide information that references prior experience, like any successful illusion, in order to create an alternate convincing reality, they also deliberately trigger misperceptions in the observer due to specific misleading cues. 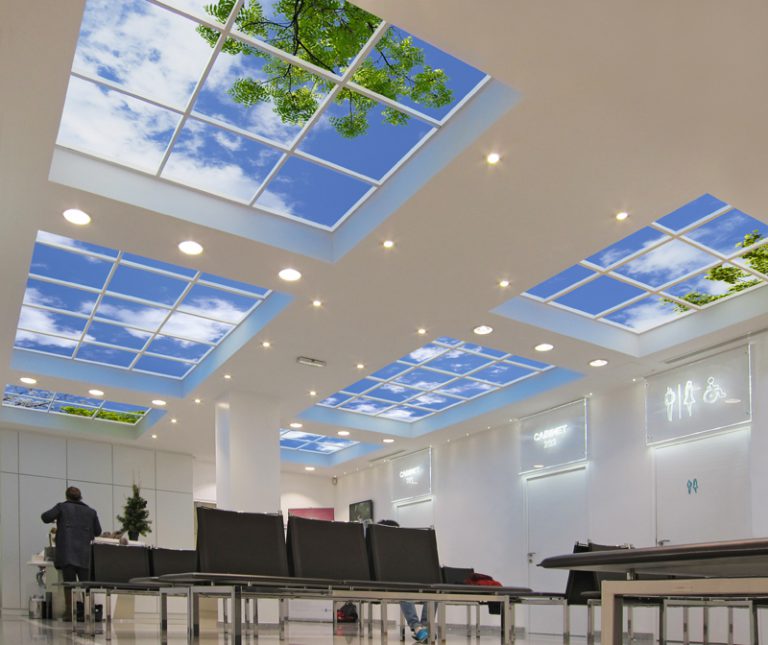 The deliberate creation of biophilic illusions is possible by manipulating our ingrained habits of perception, habits that research in neuroscience has discovered are hard-wired in our brains. Learn about the malleable nature of perception and, like magicians, you hold the key to fascinating clinical possibilities.

Until recently, researchers have been mostly preoccupied with identifying the visual properties of nature art that elicit a neural response corresponding to relevant emotional states (Nanda 2011). However, there is another cognitive function that humans are also hardwired to register immediately—spatial cognition

While cognition itself is a complex subject, it is enough to note that human spatial cognition is fundamental to human life (Mark 1993). And by “spatial cognition” we understand “the knowledge and internal or cognitive representation of the structure, entities, and relations of space; in other words, the internalized reflection and reconstruction of space in thought” (Hart and Moore 1973, as cited in Mark 1993).

In this light, while most nature art is introduced in healthcare environments to elicit an emotional response, a “positive distraction” from the stress and anxiety inherent in entering highly artificial environments (hospitals) under vulnerable circumstances (illness), nature art has not been mined for its ability to create more sophisticated cognitive phenomena such as biophilic illusions.

What would happen if nature images were deliberately designed to be perceived as life-enhancing spatial representations of sky views—our most universal experience of nature—which then engaged areas of the brain involved in spatial cognition?

That is precisely what biophilic Illusions of Nature™ accomplish.

Biophilic illusions’ ability to restore a high degree of inner stability and genuine relaxation in the observer is due to their tapping deeper mechanics than those used in “positive distraction.” While we are well acquainted with distraction technologies to divert people’s attention, few have considered deploying a visual technology that instead, reduces mental activity in order to mitigate emotional distress.

By drawing the mind inward, biophilic illusions effortlessly eliminate the root cause of worrisome thoughts and feelings, which is an overactive mind.

Distracting a restless mind does not reduce its level of activity—it replaces one form of content for another—whereas the visual content in biophilic illusions does reduce mental agitation as the observer resonates with the illusion’s perceived spatial properties as well as the positive emotional content.

Biophilic illusions immerse the observer in a deeper experience, one born of the environmental cues that effortlessly engage and mirror our genetic memory. And that’s precisely what our physiology instinctively clamors for in confined artificial spaces: a palpable connection to natural exteriors. Biophilic illusions can provide this perceived experience, altering the psycho-physiological dynamics of enclosed spaces.

For this unique ability to transform our environmental experience, the future of nature imagery in healthcare interiors belongs to restorative biophilic illusions.

After all, in deep plan buildings, biophilic illusions offer the best (perhaps, only) means to mitigate the deleterious effects of enclosed interiors on human health and well-being.

Illusions have a key role to play because even though all new healthcare construction incorporates the basic tenets of biophilic design—abundant daylighting, ample green spaces, and views to nature—the bulk of existing deep plan buildings, accounting for a large majority of hospitals in all developed economies, are saddled with huge sections of completely enclosed interiors.

In Part II, we discuss why the buildings where we recuperate from illness and treat disease, as well as the architectural spaces where we work, study, and interact, are in dire need of sustainable retrofit solutions.