Complexity, as one of the more abstract biophilic concepts, has gained quite a bit of traction as a welcomed design challenge. We talk about the objective of the Complexity & Order pattern (#10) as a means for creating a visually nourishing environment, based on an understanding of the symmetries, fractal geometries and spatial hierarchies that occur in nature. How that physically manifests as a meaningful design or spatial condition is the real challenge.

In Biophilia and Healthy Environments (Salingaros, 2015), the author explains how “a fractal contains well-defined subdivisions of structure in an ordered hierarchy of scales,” also noting that, with fractals, “complex structure show(s) at any magnification.” While fractals can exist at any scale – from textile patterns and façade design to a city street grid or regional transportation network – successful applications of Complexity & Order are perceived as being information-rich and engaging, having achieved an intriguing balance between boring and overwhelming. This brings us back to considering how well complex structures are embedded into a design, and how integral fractal geometries and patterns are to the fabric, function, or flow of the space. 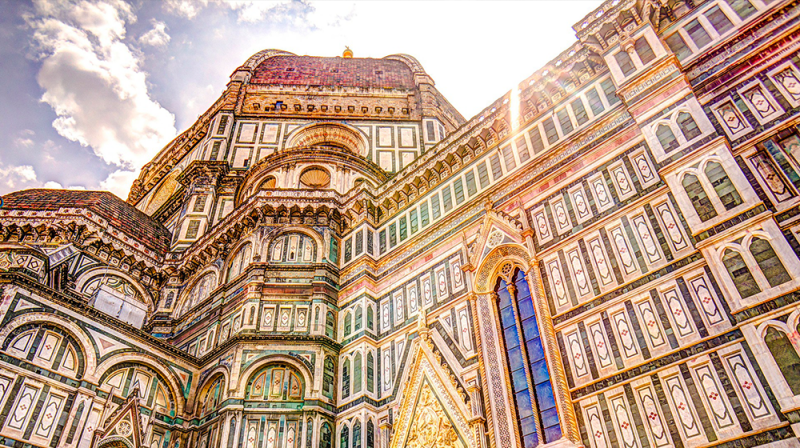 An important takeaway for designers is the concept of nested, self-similar fractal designs expressed as a third iteration of a base design, commonly explained through illustrations of a cross stitch pattern or the Koch Snowflake Curve (see figure 1: Iterative fractal geometries). Despite evidence that this higher level of complexity is likely to engender a sense of order and intrigue, as well as reduce stress in the user experience, this iterative design concept is lost in much of modern architecture, which tends to limit complexity to the second iteration. In these cases, simplified or superficial applications of complexity can consequently result in an arguably dull and inadequately nurturing form that fails to stimulate the mind or engender physiological stress reduction.

The third iteration of a fractal, as shown in the 1/27 Koch Snowflake Curve, is more likely to engender a positive health response than less complex designs (1/3 or 1/9).

The third iteration of a fractal, as shown in the 1/27 Koch Snowflake Curve, is more likely to engender a positive health response than less complex designs (1/3 or 1/9).

In Design for a Living Planet (Mehaffy and Salingaros, 2015, ch8), the authors stress the importance of a designer being able to distinguish between metaphorical and physical manifestations of complexity. Analogies and metaphors may seem clever and creative but tend to be quickly dated, missing the opportunity for establishing an enduring health impact. Complexity should ultimately improve how information is communicated, or how a system or space functions; for example, with strategies for the penetration and diffusion of daylight, with workstation orientation and organization, or with the flow of goods and services.

Classic frameworks for incorporating complexity and order in the built environment include multidimensional design coding (e.g., kit-of-parts modular systems), self-similar floor/street plans that enable intuitive orientation and wayfinding, and conceptual geometries that relate one spatial zone, plane, or scale to another.

One way of conceptualizing fractals is by assessing opportunities for micro, meso, and macro scales of complex structures. Examples of complex structures from nature are abundant – our own nervous, pulmonary and circulatory systems, as well as leaf capillaries; plant seed and leaf arrangements, tree branches and root systems; and the many tributaries that form a river delta.

Examples of complex structures can be found throughout nature and at countless scales. Lung capillaries, tree branches, and watershed tributaries have a surprisingly familiar fractal pattern that also surfaces in organically evolved urban grids and other flow structures.

At each of these scales, the complex structure is responsible for transporting nutrients and resources vital to the functionality and of the larger organism. Should the structure be compromised, stressing and failure of the system ensue (e.g., by way of heart attack, premature species failure, or flooding, respectively). We see this in the built environment too; when a space is poorly designed, occupant stress, danger, or underutilization can result.

Complexity & Order in the built environment

At the micro scale of the built environment, we can easily translate these structures to conceptual patterns or ornamentation that perhaps hint at a collective theme or connection to place. The micro scale could thus be articulated through direct transposition to textile patterns, interior finishes, window details, and facade ornamentation.

However, it is not the transposition of the image of a complex structure, but the adoption of the structure itself into the overarching design concept and organization. For instance, the design of a ceramic tiled surface will be a less successful intervention if it only expresses complexity in the glazing than if the arrangement of tiles also adheres to a complex structure that perhaps hints to more information—to a deeper story.

At the meso scale we can begin to consider in what manner a fractal may inform how users interpret a collection of designs or spaces—for example, linear and spatial subdivisions (e.g. in an open place office) or three dimensional spatial organization (elevations, circulation routes)—and how those same fractal patterns support and inspire the flow of information, people, goods, services, and resources through a building or community. The meso scale could be articulated through orientation, massing, fenestration hierarchy, and space planning.

Built to last and adapt, complex structures (not to be confused with complicated structures) exist physically, conceptually, and temporally. Design coding for interior design of open plan office spaces, for instance, integrates complexity and order into the fabric of the space and, potentially, the office culture.

Built to last and adapt, complex structures (not to be confused with complicated structures) exist physically, conceptually, and temporally. Design coding for interior design of open plan office spaces, for instance, integrates complexity and order into the fabric of the space and, potentially, the office culture.

Finally, at the macro scale we consider how a fractal pattern might contribute to the dynamic, the spatial and functional evolution of systems over time. The design challenge is to establish or support the evolution of a macro scale that is perceived, navigated, or operated with ease and comfort, without engendering negative health responses such as stress or discomfort.

We can think of the macro scale in terms of vertical flows through a building, the urban grid flows (for streets, energy, water, etc), resource distribution networks, local ecosystems, and watersheds. Macro scale complexity and order should aim to inform, improve, or optimize the flow and relationships between people, goods, services, and resources, through a building, community or region, and over time.

We can find good examples of such design throughout the urban fabric, from street grids, to architecture to interior design. The Paris street grid, and those of other old cities, evolved organically over time. Street networks in cities with historically slower growth rates are more likely to reflect the location and shape of previously existing natural flows of movement, giving the present era street grid an organic yet complex structure despite successive transformations of urban growth.

Examples of Complexity & Order in Design

According to architect Herman Hertzberger, Centraal Beheer’s office in Apeldoorn, Netherlands, built in 1967, was designed for adaptability to address the constantly changing needs of the company’s departments. A series of stacked, collaborative work pods around interstitial atria provided organizational complexity and order that supported wayfinding and visual connection to the three-dimensional nature of the space.

Satya Eastern Kitchen, by ODA Architecture in New York City, uses ceramic tile for a gridded interior wall finish displaying a picture that, when examined closely, reveals the restaurant menu in Chinese characters across the image.

Complex structures at each scale of the built environment can be interpreted and experienced multiple ways. As with the Paris street network (left), Central Beheer in Apeldoorn Netherlands (center), and the Satya Eastern Kitchen in New York City (right), some complex structures organically or intentionally accommodate internal changes, while others adapt to the changing environment, all the while providing different perspectives and levels of information.

Complex structures at each scale of the built environment can be interpreted and experienced multiple ways. As with the Paris street network (left), Central Beheer in Apeldoorn Netherlands (center), and the Satya Eastern Kitchen in New York City (right), some complex structures organically or intentionally accommodate internal changes, while others adapt to the changing environment, all the while providing different perspectives and levels of information.

As designers, we have a tendency to focus on the micro scale, if for no other reason than because it is what is asked of us. We are able to introduce the meso scale with greater regularity as clients begin to recognize the health and efficiency benefits of a more cohesive space. To elevate this endeavor to contribute to a truly effective complex structure, we need the ability and foresight to design locally while understanding the role of the micro scale in the context of other scales and timeframes. Ideally, in any given place, meso scale applications link the micro and macro scales to formulate a complex yet cohesive and orderly structure, one that is not rigid, but is instead permitted to evolved over time to adapt and promote functionality and connectedness.

Nature by Design: the Practice of Biophilic Design

Nature by Design: the Practice of Biophilic Design

The challenge of biophilic design is to address prevailing deficiencies of contemporary building, landscape and interior architecture by initiating a new framework for the beneficial experience of nature in the built environment (Kellert et al 2008, Kellert 2012, Kellert and Finnegan 2011). Biophilic design is about creating good habitat for people as a biological organism…