Last October, during the first weekend of the Chicago Architecture Biennial, artist and social activist Theaster Gates pulled back the curtain on his latest endeavor: the Stony Island Arts Bank. The highly trumpeted project entailed the conversion of a derelict bank building on the city’s South Side into a public cultural venue, brimming with galleries, event space and libraries for books, vinyl records and antique slides.

Stony Island marks the latest in a series of restoration projects by Gates in the low-income neighborhood of Greater Grand Crossing, where tattered buildings and high crime rates prevail.  Gates has lived and worked in the community since 2006, making it both his muse and his canvas. 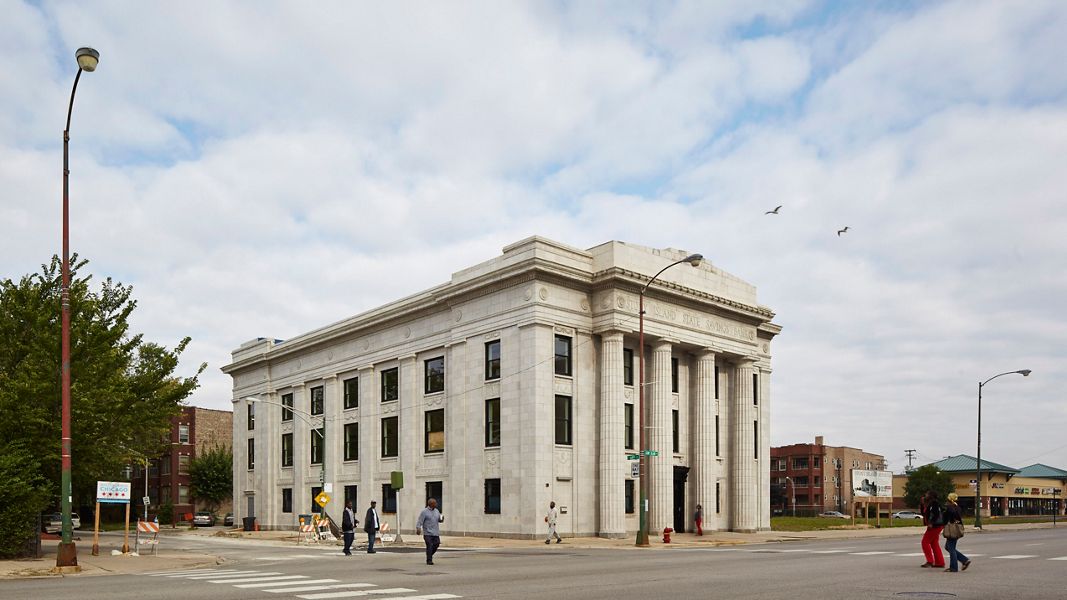 Over the years, largely driven by a desire to provide communities with access to the arts, the 42-year-old artist has snatched up dilapidated structures in the area and transformed them into cultural facilities and affordable housing. To help fund these projects, he uses salvaged materials to create artwork with a social message, which he then sells to collectors. One of his breakout pieces was a series of oversized shoeshine stands made from reclaimed wood, which he showed at a Miami art fair in 2009. During the event, Gates offered to shine the shoes of passersby. Crowds gathered to watch, and the chairs quickly sold.

Gates’ unusual approach to merging art, historic preservation and neighborhood redevelopment has made him a singular figure in the cultural world. “He’s a real estate artist, and there aren’t many figures in contemporary practice whom I could describe in a similar way,” says Jonathan Solomon, head of the architecture department at the School of the Art Institute of Chicago. He noted that Gates’ restoration efforts aren’t about upping property values and spurring mainstream development. “His work is about knitting communities together, about helping them develop resources and [making] them vibrant, healthy and sustainable,” he said. “I am thrilled his work is in Chicago, and I think it’s amazing for the city that he’s here.”

Gates is not the first artist to lead urban revitalization projects. Perhaps most notably, Tyree Guyton began painting large bright dots on decaying Detroit homes in 1986, giving rise to the famed Heidelberg Project. Years later in Houston, artist Rick Lowe and various collaborators purchased 22 rundown houses and converted them into dwellings for artists and single mothers. The development, called Project Row Houses, has expanded and is widely seen as a good example of urban regeneration, with Gates himself citing it as a source of inspiration.

Artists have led numerous urban renewal efforts in cities across the globe. In Amsterdam, artists began occupying an old shipyard in the 1990s, and it later evolved to become the cultural destination known as NDSM Wharf. In Prague, the sculptor David Černý transformed an abandoned industrial building in 2007 into the MeetFactory, an arts center with space for exhibitions, performances and film screenings.

Moreover, there are countless examples of artists populating blighted, low-rent districts and triggering the emergence of cafés, galleries and other desirable amenities. “Artist-led regeneration projects, such as those by Gates, are rare and will likely remain so. But artists can be, and often are, key components of revitalization efforts led by others,” says Storm Cunningham, a community renewal expert and author of The Restoration Economy. “Art is great at bringing diverse citizens together around something they can all appreciate. This is why artists often play a catalytic role, helping spark new ways of seeing a place.”

Gates is undoubtedly helping shift perceptions of Chicago’s storied South Side, known more for its gang violence than its architectural landmarks. A city native, Gates holds degrees in urban planning and pottery and worked as an arts programmer for the Chicago Transit Authority. In 2006, he bought a neglected single-family home in Greater Grand Crossing for $18,000, gutted it and converted it into the Archive House, a space for hosting parties and storing material he collected from shuttered businesses and unwanted archives. Two years later, he purchased a former candy store next door and outfitted the space with recycled materials, such as wooden lanes from a defunct bowling alley and discarded school chalkboards. He dubbed the project “the Listening House,” a reference to albums he had acquired from a closed record shop.

He went on to rehabilitate a public housing project in collaboration with the city’s housing authority and a private developer. The Dorchester Art + Housing Collaborative features 32 residential units, an arts center and a community courtyard. Gates also acquired a beer distribution plant, which he converted into his personal studio, and the Black Cinema House, where he screens movies and hosts filmmaking classes, all focused on the African diaspora. The nonprofit Rebuild Foundation, which Gates established in 2010, helps curate the programming for his properties, programming that “has grown out of Theaster’s energy, enthusiasm and life as an artist here on the South Side,” said Ken Stewart, the foundation’s CEO.

The Stony Island Arts Bank has been described as the artist’s most ambitious project to date. Gates long had his eye on the 17,000-square-foot neoclassical bank building, constructed in the 1920s and vacated decades ago. Largely due to the support of Chicago Mayor Rahm Emanuel, Gates was able to purchase the condemned building for $1 in 2012, with the expectation that he would generate the funding needed to stabilize it. To that end, Gates used salvaged marble from the building to fabricate a limited edition of small blocks, on which he etched the words “In Art We Trust.” He sold the “Bank Bonds” at Art Basel in Switzerland for $5,000 apiece. The $4.5 million restoration project also got a boost from individual donations and the Chicago Community Loan Fund.

When the Stony Island Arts Bank opened, it was widely praised by the press and civic leaders. Michelle Boone, Chicago’s commissioner of cultural affairs and special events, said she grew up in the neighborhood and was particularly touched to see the crumbling building’s revival. “To sit here in this space, surrounded by so much cultural heritage and beauty, is really meaningful,” she said.

While there often is a “high-brow” aspect to architecture that can leave people out, Gates said he has come to appreciate the power of architecture to transcend boundaries and fortify communities. “It’s an envelope that can carry the high and the low, the international and the very local, the rich and the poor,” he said. “It’s when those things start to conflate in really beautiful ways that we start to have redemptive architecture.”

Q&A: How Design Should Think About Sustainability

Q&A: How Design Should Think About Sustainability

Commercial designers and architects are increasingly thinking about sustainability beyond just “going green”. SUMU Design Director Felice Carlino explains why when recalling their recent project with Dexus Sydney. What was the overall the design objective and brief for the DEXUS Sydney? We were invited by Office Spectrum to partner with them to deliver a non-client specific…

The idea of ‘Green’ in Asia is dominated by certification tools. There are now some 14 national variants – not unlike LEED in the US – each offering tiered ratings at the building scale, some at the urban scale. The rating is determined by an aggregated score, the result of compliance with requirements that focus…