Biophilic Design in Urban Architecture: The Oasia Hotel in Singapore

The Oasia Hotel Downtown, designed by Woha, a Singapore-based architectural firm, is one of the most stunning skyscrapers in Asia.

There is, first, the signal-red mesh envelope, a splash of color unlike anything in its neighborhood, and then the surreptitious patches of green that seem to slowly envelop the building. Planted façades are not new – certainly not in Singapore where developers use green walls as a badge of environmental seriousness – but it has never been taken to this height, literally. Oasia does not yield to the pressure to entertain; the green-to-red ratio changes over time, refusing to surrender simple pattern-making.

Woha was founded by Wong Mun Summ and Richard Hassell, whose track record in design innovation is perhaps one of the strongest in Asia. This is a biophilic building, yes, but it also wants to be ecological. Can a skyscraper in a dense urban setting become a habitat for biodiversity? The jury is still out (a biodiversity evaluation  is underway), but this is surely a milestone in the annals of ecological thinking.

With several landmarks of towering heights, Singapore has no lack of sleek futuristic skyscrapers. The bustling metropolis is packed with residential estates, retail mega-malls and offices. Even so, this high-density urban dot has earned itself the number one spot on the list of cities with the most trees in the world—a Green View Index of 29.3 percent. This is in line with Singapore’s Master Plan 2032, which has long underscored the importance of greenery for a quality living environment.

Oasia Hotel Downtown is a standout example of biophilic design, a new type of tropical skyscraper that seeks to bring flora and fauna into the city. Not only is it an urban retreat for hotel guests, but it’s also an oasis that brings comfort and nature to city dwellers.

Rising in the midst of concrete and glass, the hotel boasts a distinctive permeable crimson steel façade (25,490 square meters) that encourages biodiversity against an otherwise harsh, concrete backdrop. With butting planters on every story (a total of 1,793 planter boxes on the façade), the aim is to wrap Oasia in a layer of green foliage with a variety of bright flowers. There are 21 species of creepers distributed across the trellis, some producing flowers that will attract birds and insects at different times of the year. To maximize their adaptability, the species have been arranged on an elevation that aligns with their preferred growing conditions (amount of sunlight, resilience to wind and growth speed). The façade extends to the ground, creating possibilities for small animals (such as squirrels) to scale the building and settle in as a habitat—this brings another dimension to the notion of a “living” building. Together with 33 different species of trees, there are a total of 54 species of plants within the tower that is able to support an ecosystem. This vegetated outer skin also seeks to transform and soften the surrounding landscape by offering visual relief. With the aim of creating a biophilic environment, Oasia’s shell visually and psychologically engages guests, staff and the occupants of surrounding buildings.

This hotel bucks the trend of a sealed skyscraper—the architecture allows guests to acclimate and experience Singapore’s tropical surroundings with internal breezeways and atria, multiple sheltered terraces, sky gardens and vertical greening. It addresses the loss of green spaces in the urban fabric by achieving an overall greenery replacement of more than 10 times the site area. Embracing living systems of lush greenery, the building is eco-friendly, humane and livable. 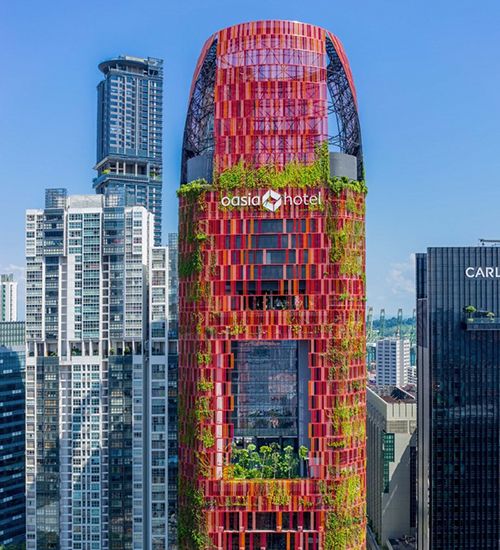 A skyline view of the Oasia Hotel in Singapore. Photo by K Kopter. 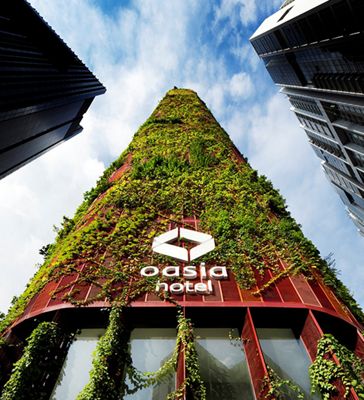 A ground-up view of the Oasia Hotel. Photo by Patrick Bingham-Hall. 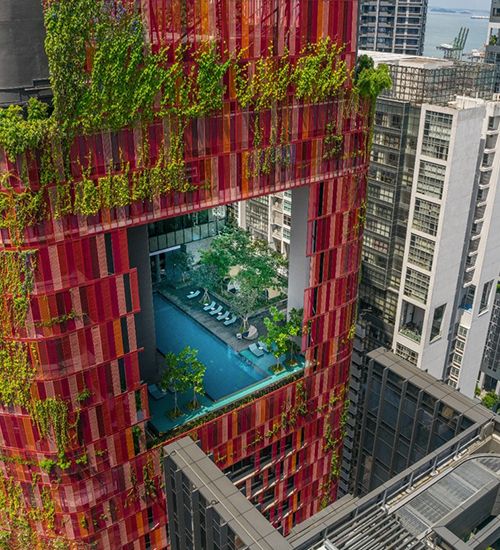 A closer view of the Oasia Hotel’s facade and pool deck. Photo by K Kopter. 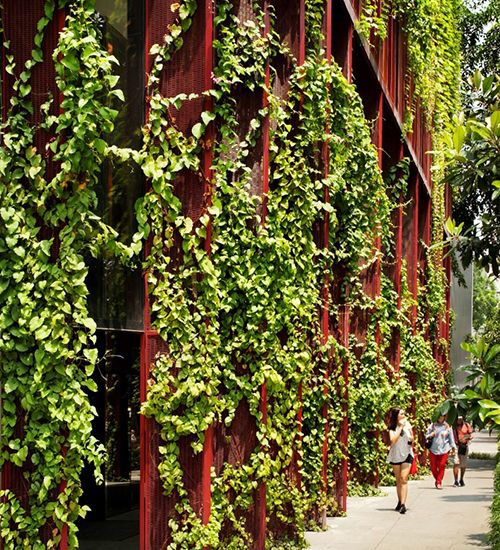 An up-close look at one of the Oasia Hotel’s green walls. Photo by Patrick Bingham-Hall.

Paving the way to green

The building sits on a 50-by-50 meter site, hemmed in by surrounding towers with congested and limited outdoor views. The project brief called for three distinct facilities: offices, hotel and club rooms. Hence, the architect stacked the three L-shaped blocks and flipped each of them to opposite corners for different views that overlook a sky terrace (at the 6th, 12th, 21st and 27th story). Effectively, the three lower verandas are each sheltered by the one above, open at the sides for transparency, cross-ventilation and daylight. The elevator and building service cores were distributed to the four corners of the building to connect each stack and reinforce the corners of the building form. By doing so, the tower carves out its own internal spaces with a dynamic 360-degree view that is not possible with a typical tower that has a centralized core. It also creates a circulation path that could support varied uses and individualized public spaces, offering opportunities for recreation and social interaction. In addition, rather than a flat roof, Oasia is crowned with a tropical bower—floral, diverse, soft and alive.

The façade mesh creates a veil, absorbing heat and providing up to 60 percent shade. The sky terraces are huge overhangs that shade and reduce heat gain, promoting fresh air and reducing energy load for the common areas. These features are intrinsic from the architectural massing and expression, without any equipment and machines. The architecture firm is in contact with relevant institutions for measurements and data collection to evaluate  the building’s energy performance and other sustainable features.

Skyrise greenery is another example of how we can add dimension to the city’s green spaces. The Oasia Hotel Downtown breathes life into the upper reaches of the Central Business District’s skyline. While rooftop and vertical greenery are not new in Singapore, there is increased adoption of this method in new buildings. Ongoing research by the National Parks Board (NParks) to identify plants and planting medium to ease the maintenance of skyrise greenery will contribute to more developments in this area.

This project was originally featured in FuturArc, July-August 2017, Vol 55. It has been edited down for length.

Saturday Indesign is home to the best of Australia’s design scene. This year’s event in Sydney was a perfect opportunity for the city’s creative scene, including our Australian design team, to come together to enjoy a collection of workshops, installations and product launches in key design showroom locations across four design precincts.  We’ve brought together…