As one of the most prominent features in our built environment, flooring can play a vital role in impacting our wellbeing. But what is the latest development in commercial flooring that has the A+D world amazed?

How a space ‘performs’ is no longer solely just about its aesthetic appeal. Certainly in the workplace, it is now also about how a particular orientation to design thinking can harbour the power to actively shape end-users’ emotional and psychological condition. In a recent interview that caught the attention of the British newspaper The Independent, the Programme Director of Spatial Practices at Central Saint Martin School in London, Dr Melanie Dodd, commented:

“The impact that architecture has on a person’s mood is huge. Arguably these are the fundamentals of architecture: not how it looks, but how we feel it, the way it allows us to act, behave, think and reflect. But it’s not necessarily causative – meaning that architecture may not have a direct relationship with our mood that is measurable. It may be complex, subjective, or happen over time and with use.”

Clearly, none of us need to be reminded of the impact that particular environments have had on our psychological wellbeing – we all too readily can recall our own experiences of discomfort, elation, calm or fear brought to the surface by a particular design scheme. But might it be time to remind the architects and designers? Some, it would seem, are saying yes. After all, in one of the more recent annual general meetings of the American Institute of Architects in Washington, Barbara Stewart – a well-respected East-Coast architect based out of San Francisco – caused silence to descend upon the room once she’d reported a chronic imbalance in architecture as creative practice versus best practice.

“Architecture is now disconnected from other disciplines and the rest of humanity,” says Stewart. Where “architects see form, light and colour, [end-users] see walls, floors and doors. Our approach is intellectual,” she continues, “and from day one of architecture school, architects are trained to worship novelty and originality”, but only “if the goal is to move architecture in new directions.”

So, it begs the question: do we need to move away from our cold intellectualism?

And, it would seem, it’s a question that’s been bugging us for quite some time. As early as the mid 1980s, American psychologist Edward O Wilson observed that alongside the increased rate of migration to urban settings in the developed world there has been a correlative increase in reported instances of mental illness, deindividuation and rootlessness. Supporting his claims, the World Health Organisation expects that by 2020 we will see record instances of stress-related illnesses, mental health disorders and cardiovascular disease all related to poorly resolved design for the modern human condition.

As urban environments continue to sprawl, many advisory organisations across the world are reporting that our diminished connection to nature, continuing pressure on the urban space, and our constant technological presence has led to dwindling opportunities to recuperate our mental and physical energy. Casting their eyes toward other areas where designers have collaborated intensely with their clients – namely within the commercial sector – such organisations are extolling the virtues of more biophilic design responses to the unique conditions of the end-user:

“My prediction for interiors is for a continued growth and interest in biophilic design – design inspired by our instinctive love of nature – that has been proven to have a positive impact on our wellbeing when executed well.” – Oliver Heath, Interior Designer and Biophilic Design Ambassador at Interface.

Bringing the outside, inside: approaching emotional design through nature

Following Heath’s above observation, we’re increasingly observing biophilic design thinking embraced in a bid to achieve greater end-user wellbeing. For some sectors, in particular, its impact has been monumental. Within the ambit of healthcare especially, biophilic design resolutions have demonstrated impressive results for those undergoing traumatic health treatments, are in a state of recuperation (as patient), or require mental clarity, a sense of calmness and reassurance (as practitioner).

This being the case, however, there is one sector which has truly pushed the envelope for biophilic design thinking’s greatest benefits: the commercial sector. Recognising that the state of end-user wellbeing looms large in questions surrounding productivity, efficiency, talent retention and mobilised capital, architects and designers are increasingly invested in.

Particularly in the commercial environment, this resurgence of human-centric values and biophilic design approaches has been proven to contribute to the greater positivity and health of end-users en masse. It was with this in mind that our new range of modular flooring for the commercial world – a Luxury Vinyl Tile (LVT) called Level Set – has entered the market. Inspired by nature and the health benefits that nature bestows upon us, this inaugural collection features two distinct styles – one based on timber planks and the other on natural stone tiles. For the Australian market there are two stone and six woodgrain finishes available whilst in Asia there are slightly more with four stone and eight woodgrain colours.

Just like the entire portfolio of our modular flooring systems, LVT tiles are glue-free and easy to install using TacTiles. They also emit virtually zero VOCs to allow for an environmental footprint over 90% lower than floors with traditional glue adhesives. Furthermore, thanks to a ceramic coat beading called Ceramor, the tiles have a beautiful finish that resists scratching and scuffing – making them an inspired choice in high-traffic environments where carpet would normally be overlooked as a viable flooring solution. 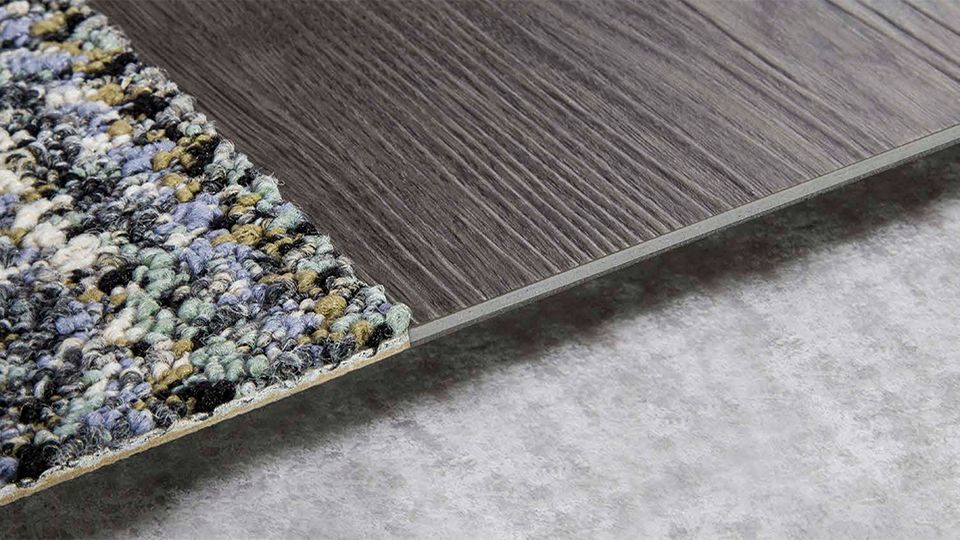 Manufactured with a fibreglass layer between two core sheets to ensure a strong centre for stability and flexibility, the LVT range can be easily modified and updated – simply lift, remove and replace. They also feature Interface Sound Choice backing to absorb and minimise noise, thereby enhancing productivity within poorly acoustically attuned office environments. In response to the continued demand from those who require a combination of hard and soft flooring, our new LVT range has been designed so that it can be seamlessly integrated with the greater range of our flooring systems.

The market-leading LVT is purpose-designed to improve user productivity and wellbeing through its built-in sound reducing qualities. In a bid to constantly strive to better the conditions of our designed spaces, Interface’s portfolio consistently outperforms other hard surface flooring products – especially those of vinyl composition (VCT), non-engineered timber and polished concretes that all suffer the inability to reduce sound impacts, reverberation and harbour the potential to accrue costly sound-controlling additions including underlayments.

“If a space offers choice between sun and shade, stimulation and reflection, connectivity and privacy, we have a sense of control and wellbeing. From our experience, therefore, we look to modularity and nature for the answer. The best spaces consist of connected but interdependent zones, just like a forest [… ] and modular building blocks offer the flexibility, functionality and aesthetic to establish these positive spaces.” – Oliver Heath, Interior Designer and Biophilic Design Ambassador at Interface.

Why LCA and EPD Matters

Why LCA and EPD Matters

Our carbon footprint, which is responsible for global warming, is created by the volume of greenhouse gases (GHG) emitted by the products and services we consume

This is the third post in an on-going series outlining each of the 14 patterns of biophilic design, a collection of biophilic strategies codified in Terrapin Bright Green’s “14 Patterns of Biophilic Design” paper. Pattern 3: Non-Rhythmic Sensory Stimuli Nature is never static; it’s always moving, growing, adapting. We notice when a room is visually…