Today, we’re taking an even stronger position toward protecting the environment. Sustainability efforts should be about more than just minimizing our negative impact, but exploring how to actually have a positive impact on our planet.

According to NASA: On Earth, human activities are changing the natural greenhouse. Over the last century, the burning of fossil fuels like coal and oil has increased the concentration of atmospheric carbon dioxide (CO2). Under the auspices of the United Nations, the Intergovernmental Panel on Climate Change (a group of 1,300 independent scientific experts from countries all over the world) concluded that industrial activities have raised atmospheric carbon dioxide levels from 280 parts per million to 400 parts per million in the last 150 years. The panel also concluded there’s a better than 95 percent probability that human-produced greenhouse gases such as carbon dioxide, methane and nitrous oxide have caused much of the observed increase in Earth’s temperatures over the past 50 years.

While cars and industry are the most obvious sources of carbon emissions, the built environment is a major contributor. According to the International Energy Association, two trillion square feet of new and rebuilt buildings will be constructed in cities worldwide over the next 35 years. To put this in perspective, humans are building the city of New York every 35 days over that amount of time. Buildings contribute to 40 percent of all annual CO2 emissions, and they consume huge amounts of electricity (for lighting, heating/cooling, security, etc.) – in fact, 75 percent of all electricity produced in the United States goes toward keeping buildings operational. For any building, it’s not just electricity usage that adds to carbon emissions, but also the materials and processes used to create them. So, reducing this embodied carbon is the most urgent challenge of all.

Global warming affects all of us. And while it’s a major concern for many businesses and individuals, sometimes it’s difficult to know how to have a positive impact. At Interface, one positive step in the climate change direction is our Carbon Neutral Floors(TM) program, which helps our customers lower the carbon footprints of the spaces they design. 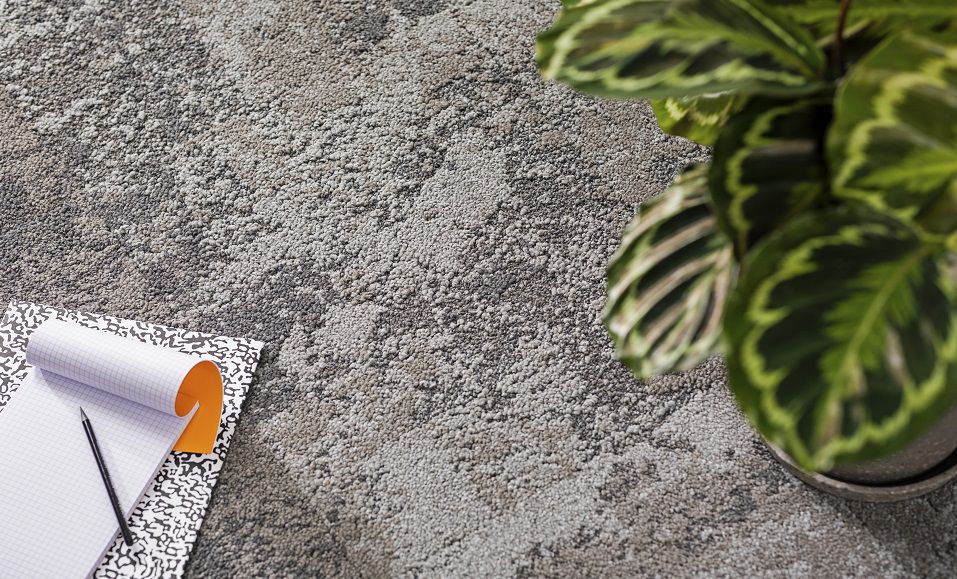 All Interface products are now carbon neutral across the entire product lifecycle. In 2018, we estimate that we will offset 400,000 metric tons of carbon emissions as part of the Carbon Neutral Floors program, equivalent to the carbon absorbed annually by nearly half a million acres of forest. That’s two-thirds of Yosemite National Park in California or two times the size of New York City.

Taking a holistic approach to carbon neutrality, we begin with raw materials we use and continue through manufacturing, transportation, maintenance and ultimately end-of-life product take back and recycling through ReEntry®, and other disposal methods. Because Interface has already reduced the carbon footprint of our products to the lowest levels in the industry, it is economically viable – and more importantly, environmentally responsible – to achieve carbon neutrality through the supply chain of the products and the purchase of carbon offsets.

Through the Carbon Neutral Floors program, we can also provide information to each customer to help them understand the carbon impact of their purchase. For each flooring purchase, we can calculate the estimated carbon reductions and present that documentation to the customer at the project or total global purchase level. For example, for every 1,000 sq. meters of Interface flooring sold, the company will offset carbon emissions equivalent to a car travelling 25,000 miles, or one trip around the Earth.

And Interface is also joining forces with Gensler as part of MaterialsCAN (the Materials Carbon Action Network), a diverse collaborative dedicated to reducing the embodied carbon footprint of our built environment. Recognizing that the carbon burden associated with the tons of materials going into building and urbanization projects is immense, Gensler is focusing on opportunities to turn this around and drive carbon out of building materials.

In response to this question, the organization has developed The Living Building Challenge, the world’s most rigorous proven performance standard for buildings. People from around the world use this regenerative design framework to create spaces that give more than they take. Living Buildings are:
• Regenerative buildings that connect occupants to light, air, food, nature, and community.
• Self-sufficient and remain within the resource limits of their site.
• Create a positive impact on the human and natural systems that interact with them.

The Bullitt Center, in Seattle, Washington, became the first office building to earn Living Building certification, in April 2015. Located on a site that was a forest filled with Douglas fir trees before European settlement, the building was designed by the Seattle-based Miller Hull Partnership to function as a tree would. “Not only does it provide shelter and sustenance for its users, like a tree would for deer, elk, birds, and squirrels, it also produces its own energy from the sun and rain, it doesn’t produce toxins, and it recycles its waste as nutrients,” according to Bullitt Foundation President Denis Hays. The 52,000 square-foot, six-story building, which is owned by the Bullitt Foundation, stands as a shining example of the accomplishments the Foundation has achieved in their quest to remain at the forefront of the sustainability movement. 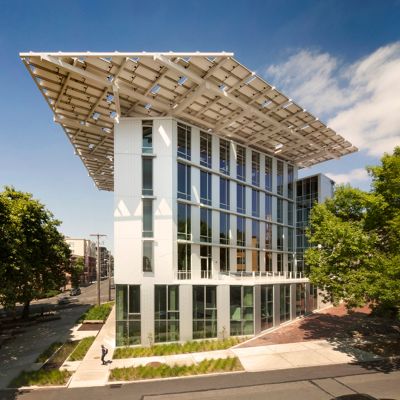 Since its inception in 1993, the U.S. Green Building Council (USGBC) has been working to mitigate the effects of climate change through green building. USGBC’s LEED rating system helps achieve buildings, neighborhoods and even cities that use less energy and fewer resources and have a lower carbon footprint. More than 2.4 million square feet is LEED certified every day, with more than 94,000 projects using LEED. And it’s in more than 165 countries and territories.

Through specific, credit-based strategies and rigorous standards, LEED guides builders and occupants alike to structures they can be proud of, structures that add as little as possible to our world’s greenhouse gas emissions and water and energy use. Of the 100 total points in LEED v4, 35 reward climate change mitigation strategies. These include four different greenhouse gas emissions reduction credits, as well as credits for sustainable site location, access to public transportation, water use, energy performance, carbon offsets and life cycle impact reduction.

On average, approximately 70 percent of a material’s carbon footprint is attributed to raw material extraction and processing. So, in order to impact our total carbon footprint, Interface has looked at how to redesign our products to promote a healthier planet. In the case of our Proof Positive prototype tile, we’re accomplishing this goal by incorporating natural, plant-derived material throughout the carpet tile to create a product that actually benefits the environment. The plants from which these resources originate have grabbed carbon from the atmosphere—in fact, harvesting the materials does not necessarily entail killing the plants—and that carbon then enters the closed system that Interface has been developing for the last two decades. 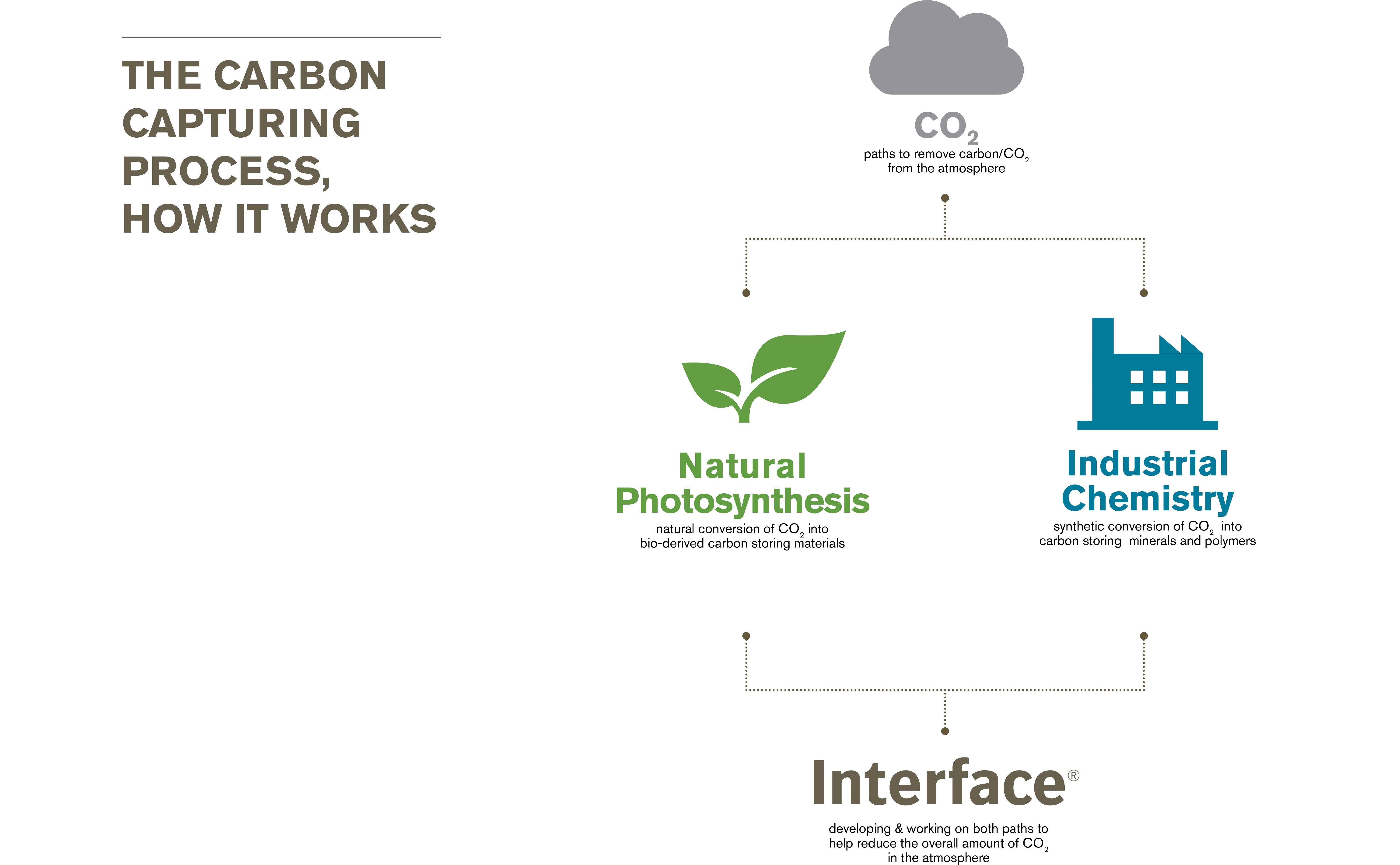 We’re also addressing the back of the carpet and how it can impact the carbon released into the atmosphere. Recently introduced in the European market, our CircuitBac Green backing is created with a mix of a bio-plastic and mineral filler and is the first step in the commercialization of our Proof Positive prototype tile. The combination includes a bio-based component that provides a carbon-negative alternative to existing backing systems, meaning it absorbs more carbon than it emits during its production. As a result, there is less carbon in the atmosphere. 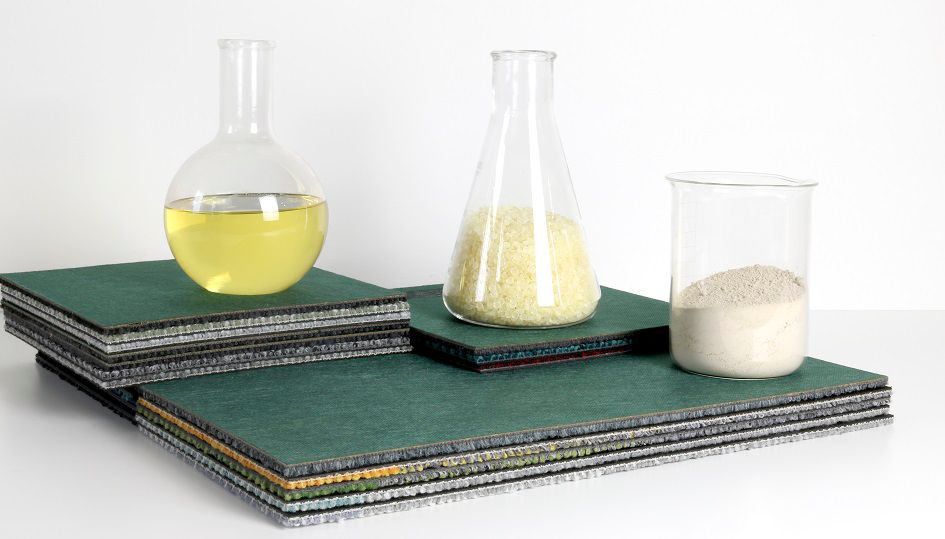 Our new sustainability mission, Climate Take Back™, challenges us, and others, to contribute to a space that nurtures us all: our planet. At Interface, we’re optimistic about reversing global warming. Together, we’re taking steps to create a climate fit for life and an environment that supports us all. We know it’s possible.

We believe we can reverse global warming if we focus on four key areas:
1. Live Zero – Do business in ways that give back whatever is taken from the Earth.
2. Love Carbon – Stop seeing carbon as the enemy, and start using it as a resource.
3. Let Nature Cool – Support our biosphere’s ability to regulate the climate.
4. Lead Industrial Re-revolution – Transform industry into a force for climate progress.

We know we’re not on this journey alone. In a recent global survey, we discovered that 95 percent of climate experts and 91 percent of emerging business leaders also believe we can create a climate fit for life. In the built environment, the challenge is how can we create spaces that not only provide positive experiences for those who use them, but also for the planet as a whole. The solution lies in taking a hard look at the energy usage and processes and products that go into a space, including manufacturing and life cycles. The ultimate question is: How can this space give back more than it takes?

Imagination is one of those words that inspire us. It reminds us of children playing, and Einstein claiming that it’s more important than knowledge. The word gets used in a lot of ways, but for the most part people mean one of two things. First, people use the word to refer to creativity in the…