We have long understood the positive impacts of nature on wellbeing and learning capacity, particularly in young children. But how can nature be brought into urban classrooms?

In Finland, the ‘forest kindergarten’ is gaining popularity. Four days a week, rain or shine, small groups of 5- and 6-year-old children are led into the forest by a teacher and two classroom aides for a four-hour educational romp through the Nordic forest. Lessons vary from simple lessons about plants to building using sticks and cardboard, and sometimes include ‘observation’ time, where children sit and observe the forest. In 2016, Atlantic reporter Timothy D. Walker observed that the students were intelligent, energetic, and engaged. Throughout his visit, Walker tried to find a single “bored student” and when he finally thought he had, he was mistaken: “He was simply resting”.

How Do We Connect Children To Nature In The Urban Space?

The unique ability of nature to promote cognitive functioning, particularly in children, has been known for years. When our parents – and their parents, in turn – encouraged us to “go play outside”, they were (perhaps unknowingly) tapping into a wealth of research suggesting the developmental benefits of connecting children with nature. According to a 2002 study by Taylor, Kuo and Sullivan, access to, or even a mere view of, green settings increases peace, self-control, and self-discipline for inner city youth, particularly girls. But what is to be made of urban environments where access to forests or even large green spaces is not feasible, if at all possible?

Designer Oliver Heath considered this question carefully when approached to design a new space for The Garden School, an inner-London school for 2- to 16-year-old children with autism. Tucked into an urban block with little access to green space (and certainly no nearby forest), the School posed a conundrum for creating a nature-based learning environment. To add further complexity, outdoor environments stressed the students at the School, who became overwhelmed by high levels of noise and activity. Simply bringing the children into nature wasn’t an option, so Oliver devised a new solution: why not bring nature to them? 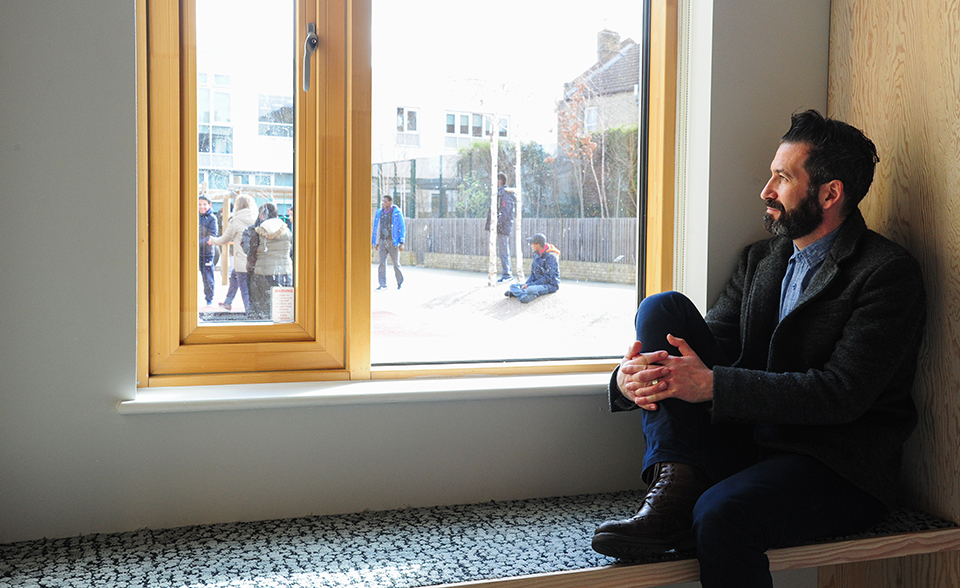 Teaming up with Interface, Oliver designed a space for the children that fosters an indirect connection with nature through materiality and colour. The resulting interior space is an exemplar of biophilic design that turns a previously unused space in the school into a restorative haven for the children. Children are bathed in warm natural light while they sit and look at the playground, interact with the room itself, or nestle into the honeycomb-like structure of pods against the back wall. The stressful noises of outdoors are removed and children are treated to a safe, recuperative space for retreat and relaxation. 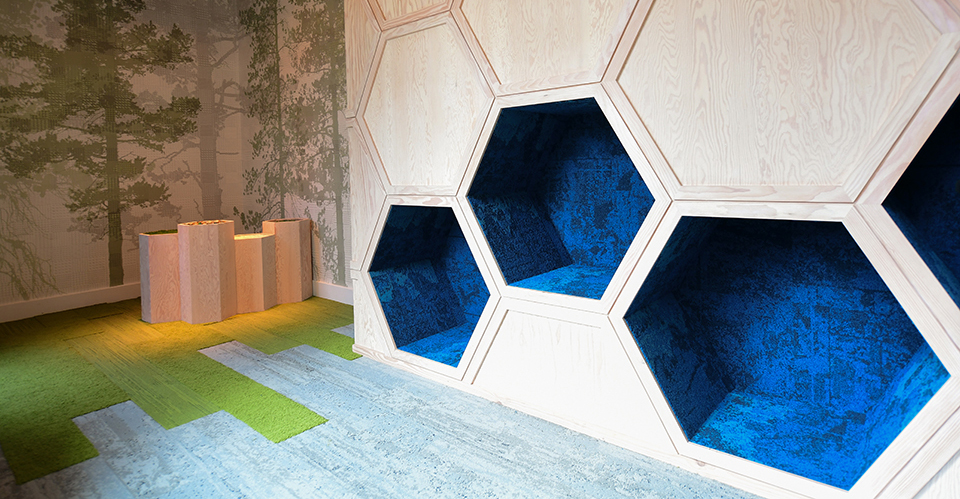 Built from sturdy plywood, pods throughout offer a soothing space for children to retreat into. Aesthetic and material choices across the various spaces reflect a strong connection nature. Tree decals adorn the walls and light is kept to a warm, diffuse level. Together, a series of hexagonal, cocoon-like pods join Interface’s Net Effect modular flooring system specified in blue, a colour chosen specifically for its calming, relaxing properties. In varying pile heights and bright shades of blue to green to mimic the look and feel of grass and provide a tactile reference to nature, varying textures throughout provide an interactive element and, when depressed, cue a soothing soundtrack of trickling water, rustling leaves, or birdsong.

The project thinks well outside the box when it comes to education design, and is the latest in Interface’s +Positive spaces™ initiative, which encourages designers to challenge the ‘one-size-fits-all-approach’ commonly taken to commercial design. By considering the particulars of the brief and innovating to address these, +Positive spaces™ are novel spaces that provide the three values most sought after by today’s users: creativity, productivity, and wellbeing. Thanks to the considered work of Oliver Heath and Interface, The Garden School has each of these in spades, delivering a sensitive space to cater for a generation of young learners.