Before biologist Janine Benyus, biomimetic design was an amorphous idea, without a singular guiding methodology or end goal. That all changed with the publication of Benyus’s 1997 book Biomimicry: Innovation Inspired by Nature, which gave the world its first working definition of biomimicry and introduced scientists, capitalists, and designers to the ingenious ways the Earth has thoroughly mitigated many design problems over its 3.8 billion-year development.

For example, animals have had millions of years to develop innovative, energy-efficient solutions to the challenges of the living in the wild. Biomimicry allows designers to adapt the same solutions to the built environment but in a fraction of the time.

“There are very deep methodologies around learning about nature, but not about learning from nature,” explained Benyus in an interview for TED. “Biomimicry borrows nature’s blueprints, recipes, processes, and ecosystem strategies and then comes up with design principles to solve our own problems.”

The idea of looking to plants and animals to improve the functionality and sustainability of humanity’s creations is gaining steam in today’s architecture, design, and engineering industries. Mega-structures like Grimshaw Architects’ Eden Project and Michael Pawlyn’s Sahara Forest Project or Mick Pearce’s Eastgate Centre demonstrate how biomimetic solutions can improve the efficiency, quality, and sustainability of buildings, which are desperately needed.

“It’s common sense to use the biomimicry approach,” says David Oakey, a giant in the sustainable design movement and product designer exclusive to Interface. “Nature is basic—it recycles everything, rewards cooperation, banks on diversity, and adheres to the ‘form follows function’ mantra. If we want to make our built environment stronger and able stand up to the elements, we have to design organically.” 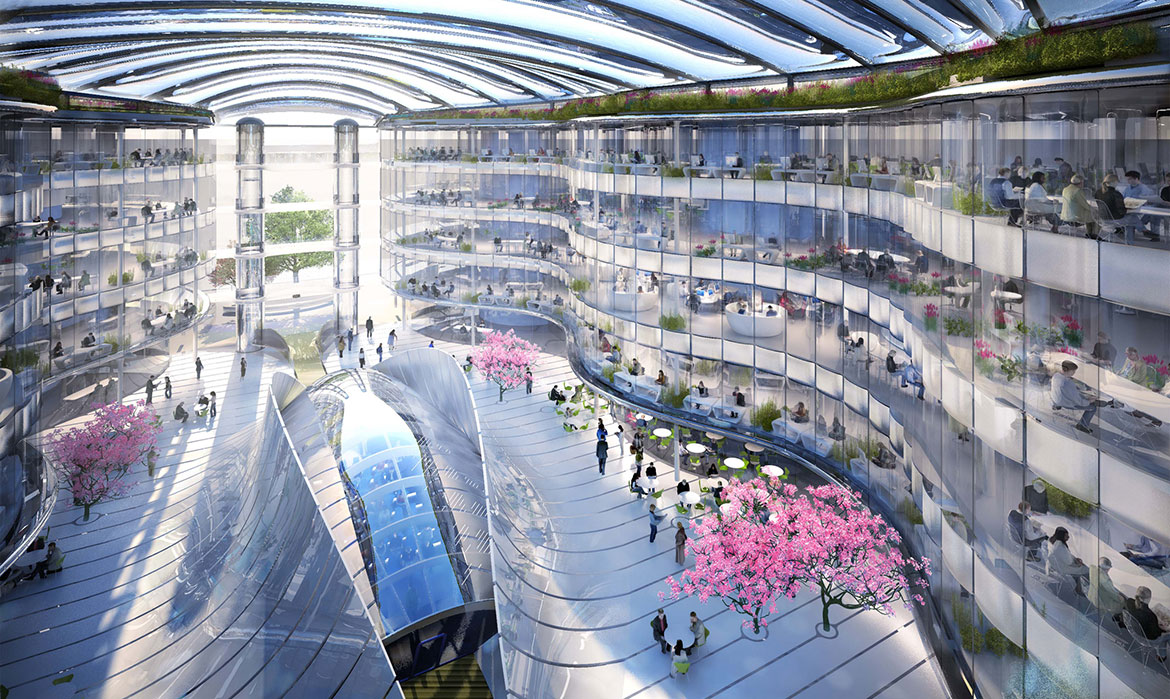 Michael Pawlyn’s concept for a biomimetic office building, which is a world’s first and is comprehensively informed by biomimicry. The team found inspiration in various plants and animals, including the giant Amazonian water lily and the sea urchin. Rendering courtesy of Exploration Architecture.

Lisa King, vice president of product and innovation at Interface, agrees, pointing out that nature was the original driver of innovation on this planet. “Nature has continuously delivered elegant solutions to all sorts of design problems,” says King. “A lot of innovation is about constraints, so the simple resilience of natural systems can serve as a great source of inspiration for new approaches to design and manufacturing.”

Along with buildings, architectural materials that borrow from biology are taking hold in the market. ArchDaily reports that bioMason, a startup comprised of designers and biologists, developed a commercially viable brick grown by bacteria in ambient temperatures. This invention undercuts the extremely energy-intensive and polluting process of brick firing. Architects can also turn to biomimicry for exterior cladding. Biologist-turned-architect Doris Kim Sung found inspiration for a hyper-efficient thermal bimetal material in human skin. This product allows a building’s exterior envelope to self-shade, self-ventilate, and self-operate without electricity. 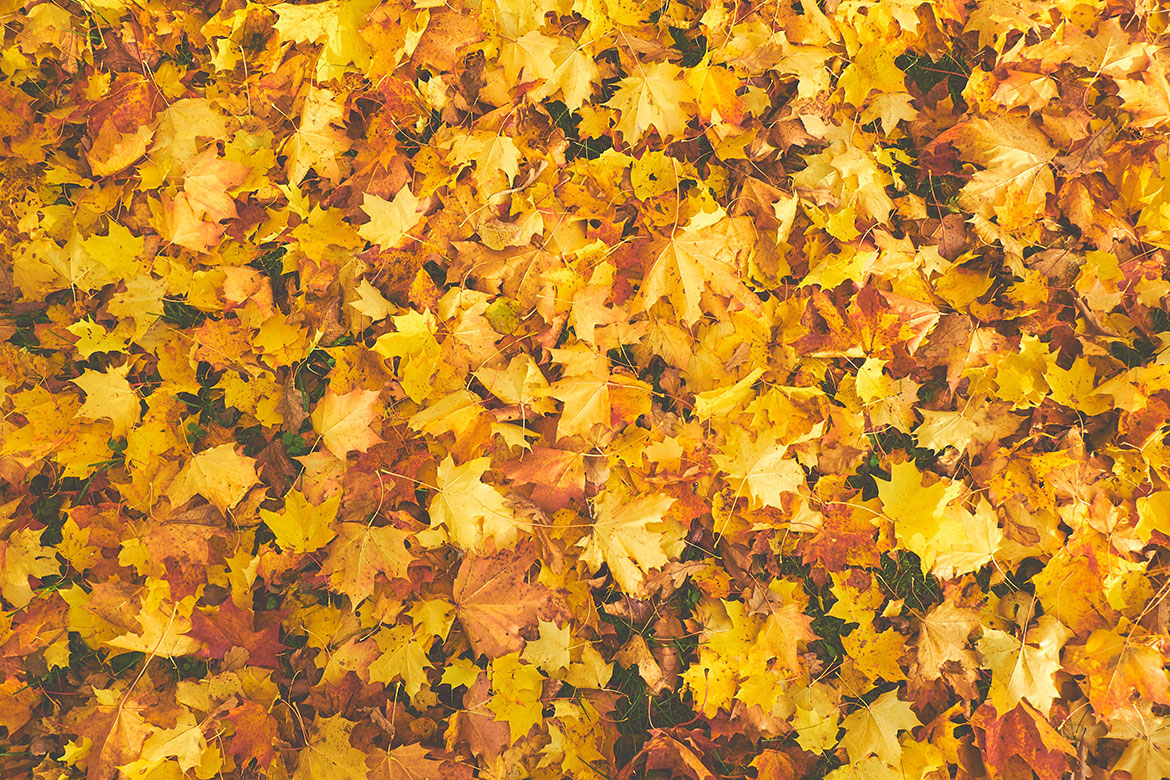 But a designer doesn’t necessarily need to be a biologist to come to similar realizations, according to Oakey. “I don’t have a biology background; my inspirations came from my own outdoor experiences,” he says. “Go outside and take a careful look at your surroundings. Once you develop an eye, you’ll see inspiration everywhere.” 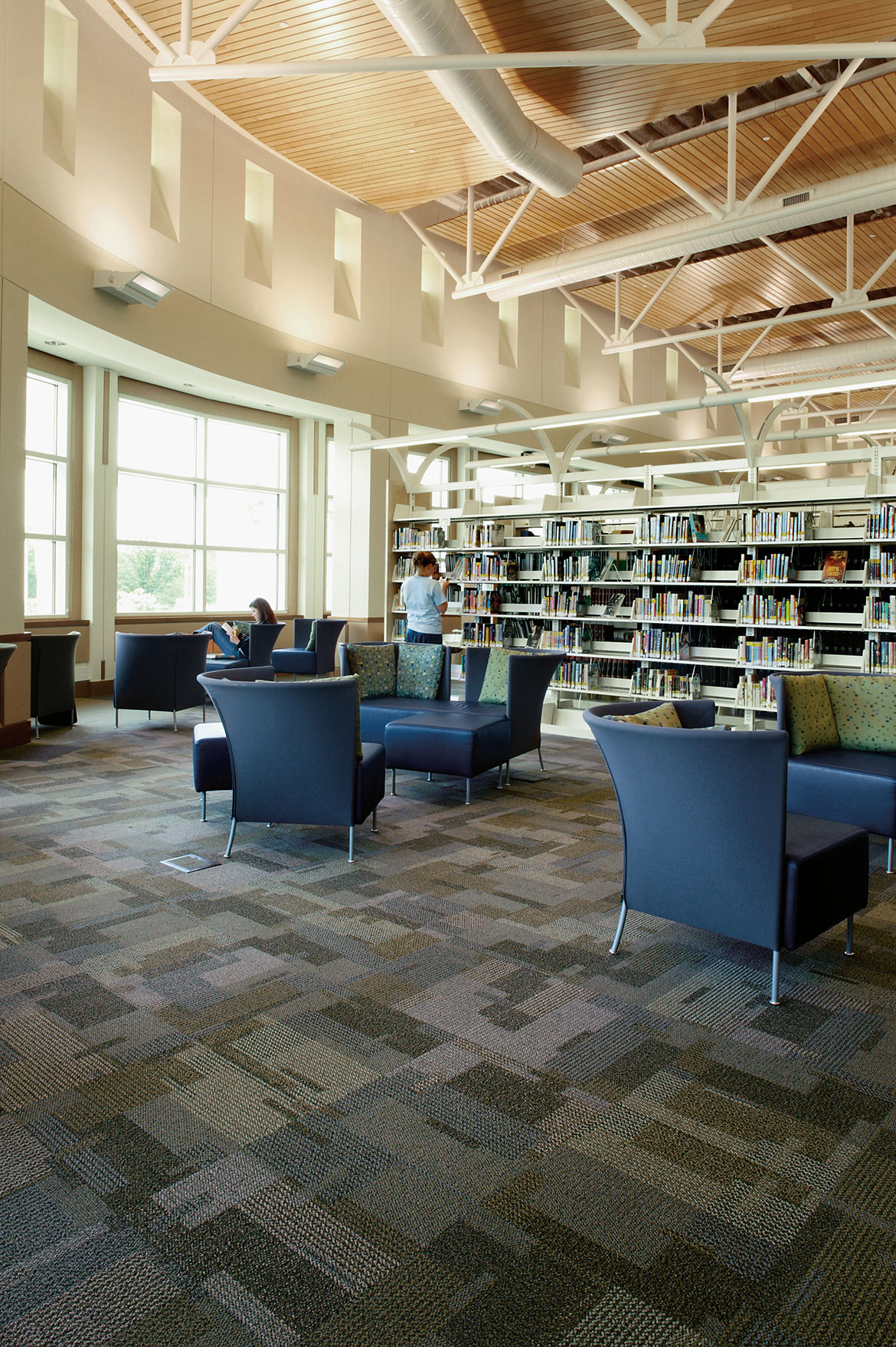 Entropy was used throughout the Elmhurst public library.

With biomimetic architectural programming and materials becoming increasingly viable, the hope for a new paradigm of environmentally friendly building doesn’t seem so far-fetched. But what about interior design? And what does biomimicry look like on the product level? Oakey would know: He created Entropy™ for Interface, the world’s first biomimetic carpet tile. He studied the way the random but beautiful ways pebbles amass in a riverbed and leaves blanket the ground in a forest to create a something unique. Entropy revolutionized the flooring industry because it featured carpet tiles with random, non-directional patterns and gradations of colors for the first time. The intentional color variations removed the need for consumers to purchase large quantities of “attic stock” in order to ensure matching replacement tiles. The non-directional pattern also equated major savings, averaging only 1.5% installation waste. Put that another way, that’s nearly 50% less waste than traditional broadloom product. That capacity certainly takes nature’s focus on economy to heart.

Interface went even further from there, looking to biomimicry to make the component parts of carpet installation a greener enterprise. TacTiles®, glue-free carpet adhesive, was the result. This time the company channeled the gecko, a reptile who uses more than a million tiny foot hairs to stick to surfaces at any angle. The brand borrowed that strategy to create a glue-free carpet installation system that involves less mess and increased flexibility, mimicking nature’s ability to solve a design problem efficiently and creatively. The gecko-inspired product also reduces Interface’s environmental footprint to one that’s 90% less wasteful than traditional adhesives. Again, biomimicry proves that its codes can make the built environment as hospitable to life as the natural world.

The biomimetic craze is picking up steam and not a moment too soon. Climate change and environmental degradation are serious problems that the world is finally starting to pay attention to. If designers and architects pick up on this design method in time, there’s a real chance to make impactful change that lasts. There’s still room for innovation within biomimicry, too. Oakey posits that the next frontier in biomimetic carpet design will be 3-D printing, which will allow designers to create carpet tiles at the site, echoing nature’s way of existing in a local context. 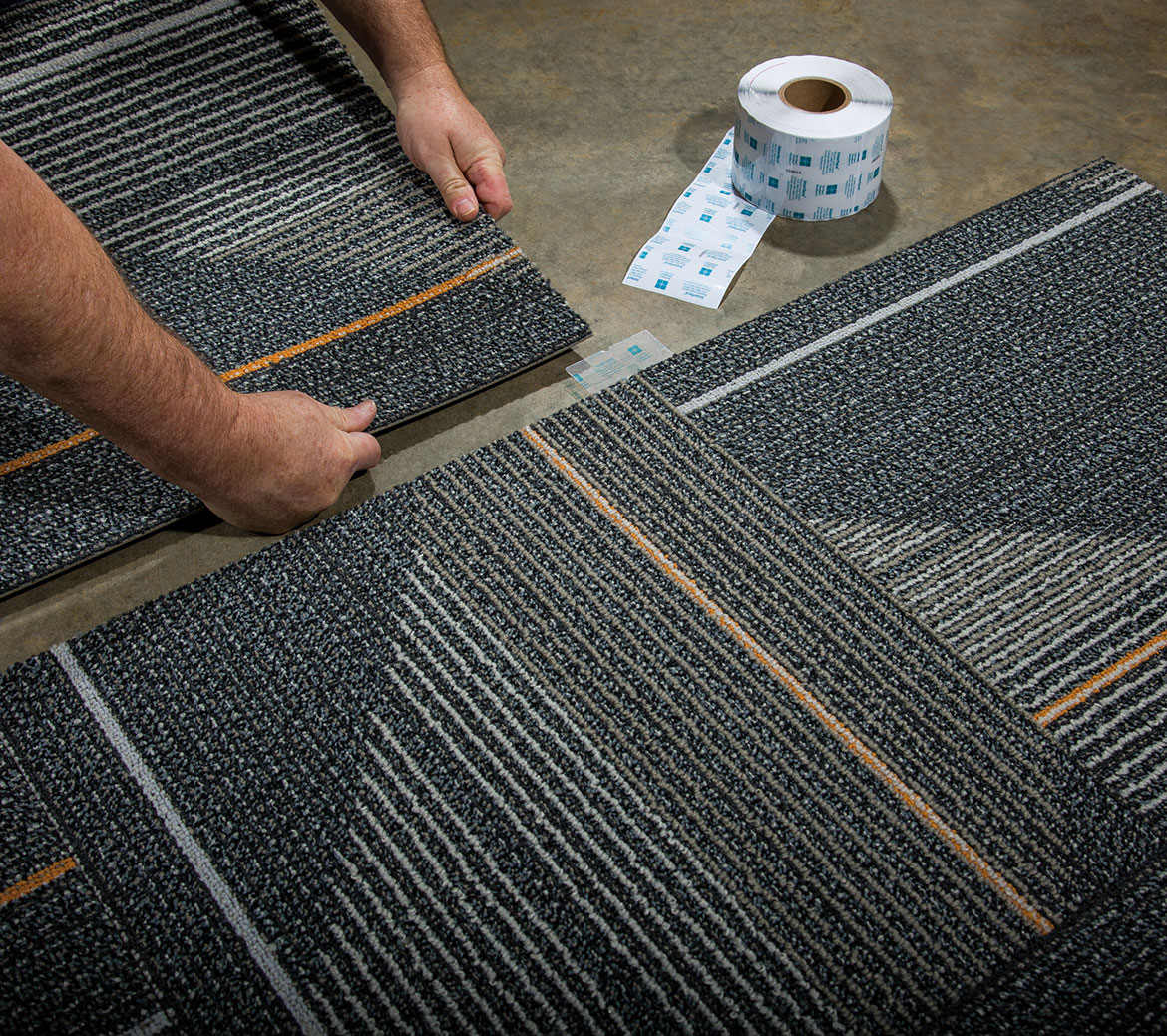 An example of adhesive-free installation with TacTiles.

“We’re still dealing with squares, rectangles, planks, and oblongs in carpet manufacturing—these are inorganic shapes that create waste,” he explains. “And we still have to package and ship them, which also puts strain on the planet. In the future, I imagine carpet manufacturers will be able to print tiles right at the site in shapes that comport with nature’s principles, which have been shown time and time again to be better than anything we can come up with on our own.”

King sums the broader future of Interface’s biomimetic product development nicely, saying “like natural systems, biomimetic designs are self-reinforcing and self-solving. Some of the beauty in their form derives from the efficiency and robustness of their function.”

Now that’s a promising future for the industry.

Geometry is an integral part of design from start to finish. Just think about it. Architects use geometry to study and divide space as well as draft detailed building plans. Builders and engineers rely on geometric principles to create structures safely. Designers apply geometry (along with color and scale) to make the aesthetically pleasing spaces…

An Interview with Michael Pawlyn, Architect & Author In The Biomimetic Office Building, lighting takes its inspiration from the translucent four-eyed spookfish and a spindly-legged cousin of the starfish, the brittle star, both deep ocean dwellers. The building’s glazed glass exterior nods to a mollusk’s iridescent shell, while our own double duty spinal column is…