Modernizing Learning Environments at the University of Indianapolis

Established in 1901, the University of Indianapolis (UIndy) has a long history of academic excellence and student success. Meeting the needs of students and staff is key to both, and when UIndy was ready to bring some aging buildings into the 21st century, they turned to long-time partner DELV Design.

While each project was different, there were some consistent themes throughout, including the need to create collaborative spaces for students to gather before and after classes. With Good Hall, the campus’s oldest and most well-known structure, DELV Design was further charged with keeping the legacy of this iconic building intact.

Merging past and present

Narrow hallways, light colored walls and monotone flooring showed the building’s age. There was little energy in the space, and the layout made it neither possible nor likely for students to meet before and after classes. Faculty and staff members were also more isolated in closed offices along the corridors.

Amanda Welu, a partner at DELV Design, says, “Part of our solution was not only cosmetic updates, but also opening up and creating a hub so that students could gather to collaborate before or after class, so they could have a between space. We had to find a way to do that and celebrate the legacy of this most historic structure in the design.”

Outdated corridors were broadened and feature a floating wood arch overhead that accentuates the building’s original architecture. Spaces were opened up to create those gathering spots outside classrooms and the office spaces were given more visibility with a storefront design. New furniture and finishes updated the spaces and throughout, DELV Design kept the school’s colors and symbols in view. 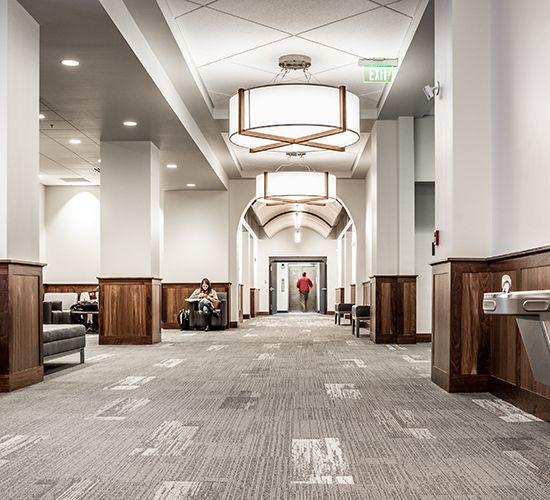 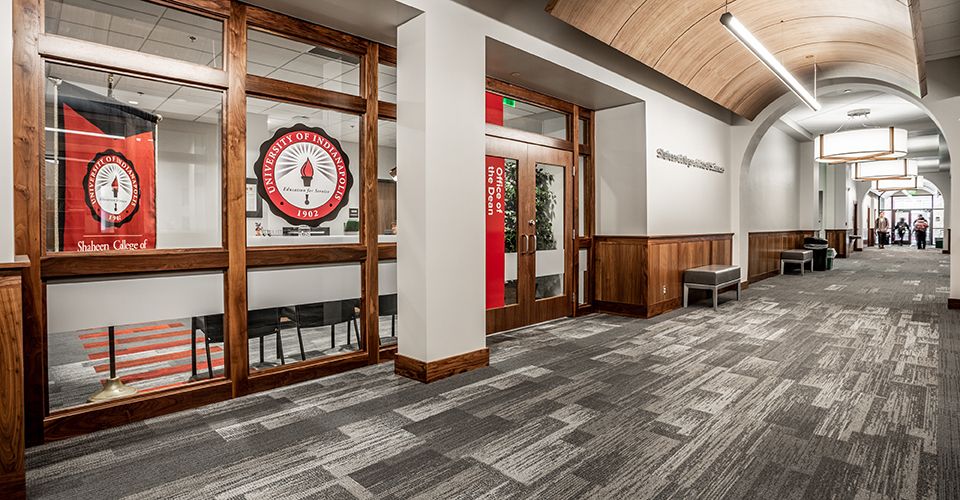 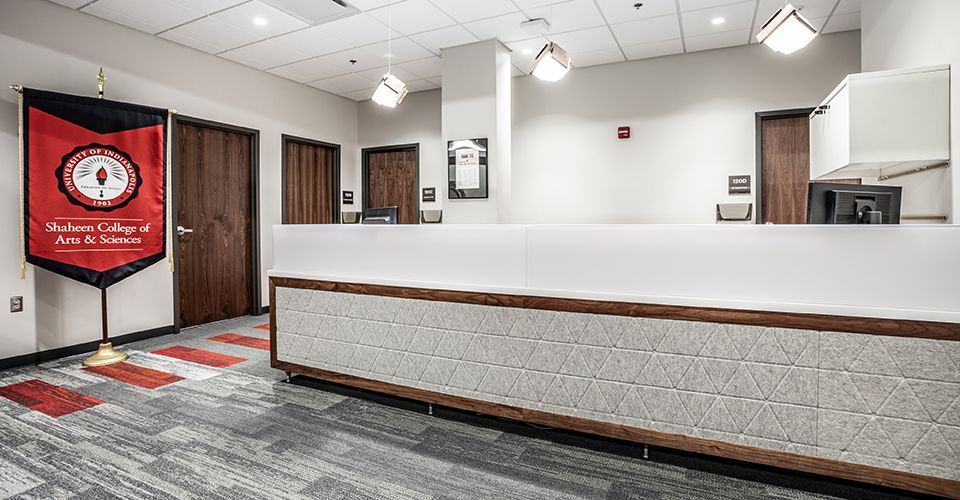 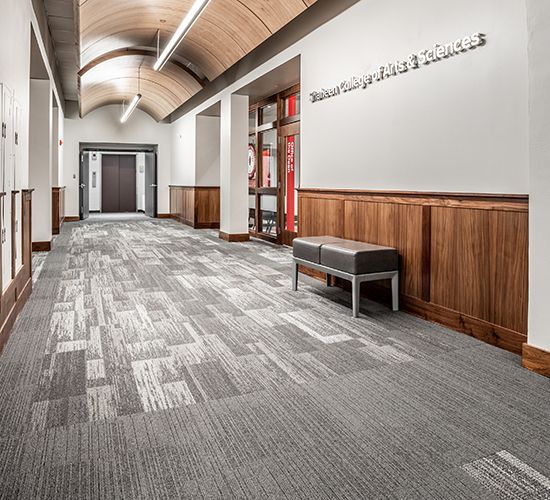 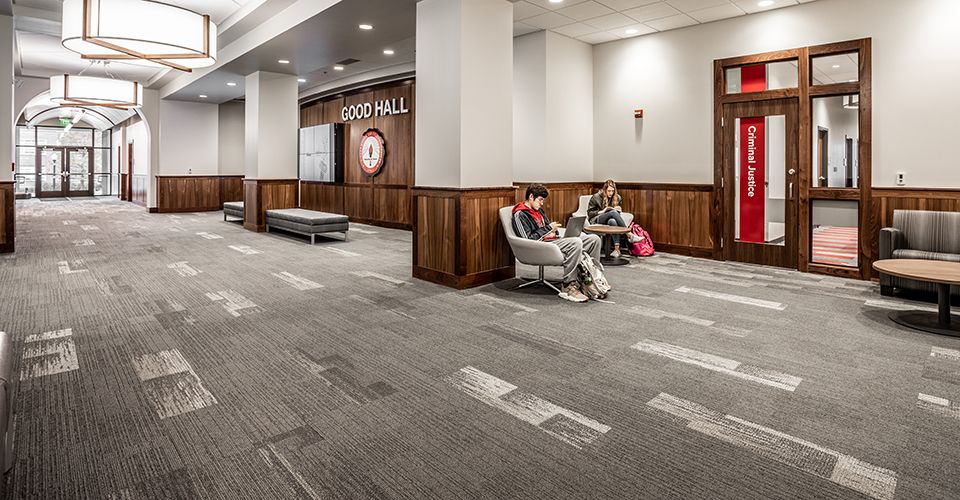 To achieve the envisioned warmth and vibrance, Designer Marisa Gregg chose Interface carpet tile for the corridors and open spaces. She says, “I used Aerial™ Flying Colors because I needed a coordinating collection of multiple carpet tiles to add texture and wayfinding in the space. The bold red in this collection perfectly coordinated with UIndy’s branding, and I was able to be playful with tile placement because of the multiple options for each colorway.”

Chris Lake, another partner with DELV Design, says, “I think most of the color and energy in the space came from the flooring. That’s where the movement occurred. That space turned out awesome. I was there on one of the days when students first started coming back, and they walked in and literally, everybody just stopped. They thought they were in the wrong building.”

In nearby Esch Hall, Marissa used Boundary Metallics™ LVT in the Finance Lab. She says, “The lab has a storefront glass system, making it one of the first spaces you see when you walk in the building. The finishes needed to be eye-catching and stunning. The metallic effect in the LVT was the perfect solution because it gives an organic, yet stunning feel to the lab and the LVT is perfect for chairs with casters.”

“I think most of the color and energy in the space came from the flooring. That’s where the movement occurred. That space turned out awesome. I was there on one of the days when students first started coming back, and they walked in and literally, everybody just stopped. They thought they were in the wrong building.” – Chris Lake, DELV Design

Another campus renovation project, Lilly Hall and Martin Hall, brought its own challenges, including a tight budget and an even tighter schedule. Built in 1962, Lilly Hall had not seen much use since Martin Hall was constructed in 1999, but growth and a new degree program demanded not just more lab spaces, but more sophisticated ones. The buildings also needed the design updates that allowed for more collaboration areas and open, office suites.

Chris Lake explains, “The budget was pretty thin for this type of renovation, which included replacing all their chilled water piping, the fire alarm system, two new chemistry labs, a biology lab and a greenhouse in addition to the cosmetic changes. We also didn’t have a lot of time. We created office suites to increase interaction there, and we added gathering spots for students on each floor. We used the carpet tiles in these areas for wayfinding and to energize the space. Each floor is a different color, as well.” 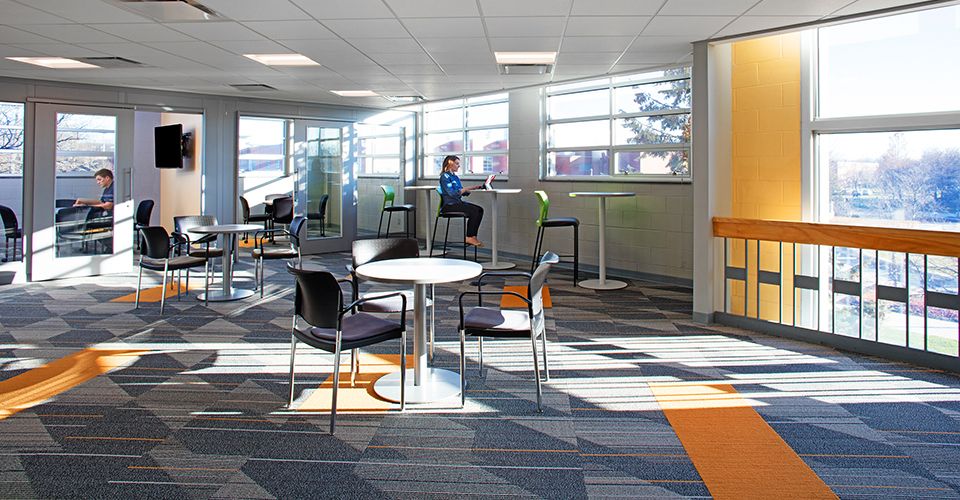 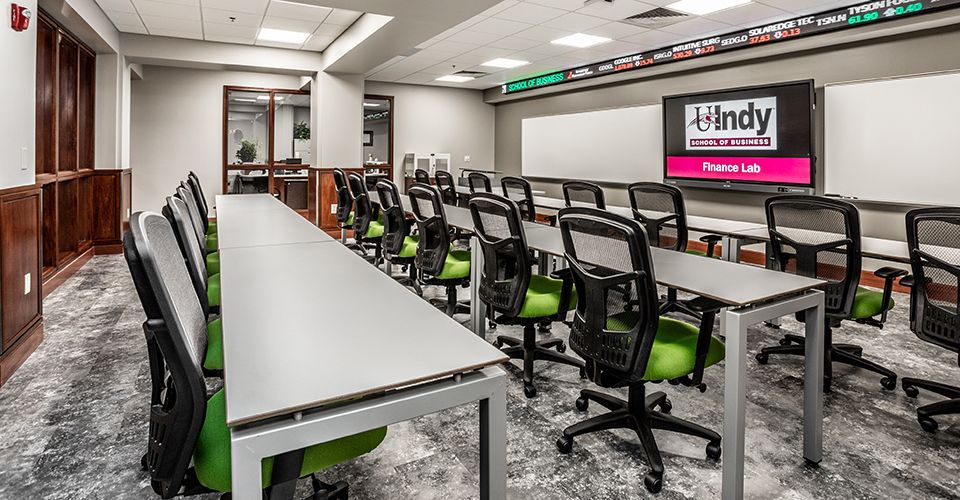 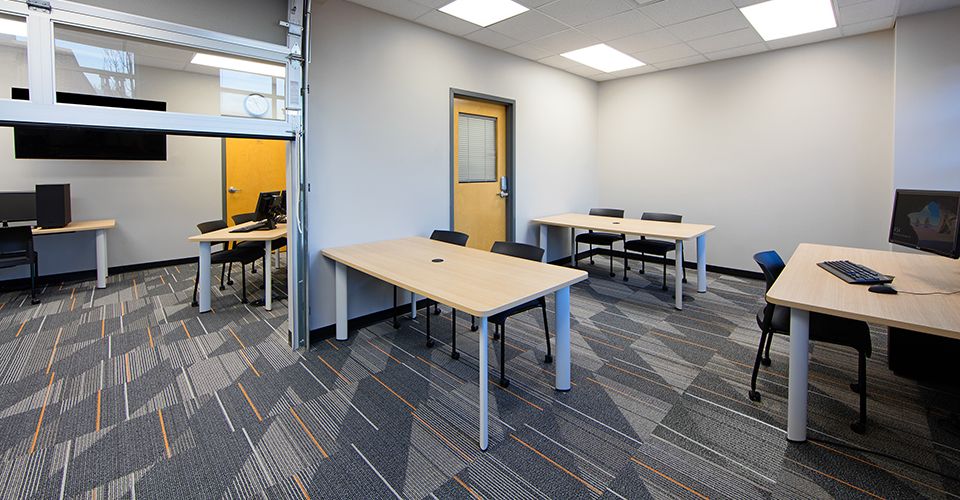 Because timing was important, many of the products used are from Interface’s QuickShip program. In fact, the Good Hall project featured QuickShip options as well, and Facilities Manager John Leck cites the program as one of Interface’s best offerings overall.

He says, “We usually have a quick turnaround on the front end of projects. Sometimes it’s because funding comes together faster than we expected or the opportunity to change out the flooring presents itself in the midst of another project. When we need to do it ‘right now’, I really like QuickShip.”

Beauty and fast delivery mean little without performance, and Chris cites durability as another reason they chose Interface carpet tile. He says, “[UIndy] wanted us to select the product that we believed could be in that space and take the wear and tear of a busy university environment.”

From a facilities perspective John adds, “We’re a private university so we pride ourselves on being able to stretch a dollar where we need to, and when we’re doing a project, we need to make sure it’s going to last. We’ve had great luck with the product itself and being able to remove stains.”

Located 30 minutes south of Toledo, Ohio, and a little over two hours north of Columbus, Ohio, Bowling Green State University (BGSU) is anything but normal. Other than a brief visit for a soccer tournament some years ago, I had not experienced the flavor of BGSU until a recent photoshoot of the Davis Wince, Ltd. newly renovated Bowen Thompson Career Center, 2nd Floor Student Union, and Falcon Outfitters campus store.

Monterrey Institute of Technology needed to modernize its facilities in order to attract and retain the next generation of learners and innovators. So, the university launched a new mission to update its spaces with design that was fresh and colorful.