In medicine, diagnostic tools are essential, arguably as important as advancements in treatments. Take the thermometer. In the early 1700s, physicist Gabriel Fahrenheit discovered that adding a bulb of mercury to a narrow glass tube created a more precise and efficient measure of temperature, forever changing the course of medicine. While the mercury thermometer was hardly the first means to document temperature shifts—Galileo created a device to do this in the late 1500s—its minimalist design and precise readings made for a widely accessible innovation.

When it comes to the human body, an infection or abnormality only can be cured, or treated, when its presence is known, which means advancements in diagnostic devices are constantly in demand. The same goes for our planet, and instruments that help measure, maintain, and restore its balance are as vital as ever. Scientists studying climate change say rising temperatures and sea levels will set in motion immense human health risks around the globe. The good news? Designers and manufacturers are uniquely positioned to mitigate this impending crisis by taking steps to neutralize, and potentially reverse, a driving force of the problem: carbon emissions. 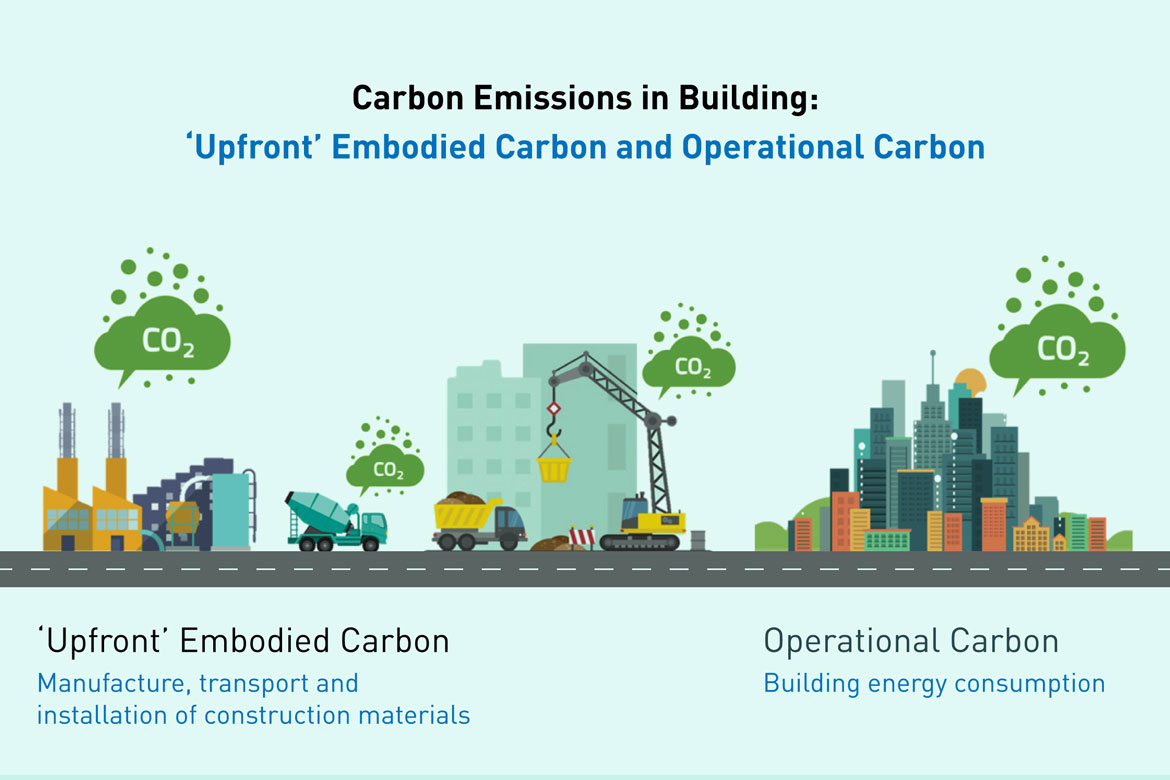 Carbon dioxide—a colorless gas produced by burning fossil fuels, such as coal, natural gas, and oil, and through respiration—is the most prevalent greenhouse gas in the atmosphere. Following the industrial revolution, the concentration of carbon in the atmosphere spiked and continues to rise to dangerously high levels, surpassing 400ppm in 2013—warm enough to melt ice chunks in the arctic—for the first time in recorded history, according to NASA. Since greenhouse gases absorb heat, warming the planet, a key to preserving clean air and water and slowing the effects of climate change is understanding the amount of carbon emitted from a given process, product, or building.

Now there’s a tool available to help designers and manufacturers do just that: the Embodied Carbon in Construction Calculator (EC3) tool, created in collaboration with the Carbon Leadership Forum by Skanska USA, Microsoft, and C Change Labs. The EC3 tool, which is a free open-source resource, enables users to assess the embodied carbon of their building or project’s supply chain, while calculating a wholistic measure of the carbon emissions generated by each project, arming them with the knowledge to specify and procure lower-carbon options based on available products. The tool utilizes building material quantities loaded directly, imported from Tally, or from BIM360 models.  The tool also takes into account a robust database of third-party verified Environmental Product Declarations (EPDs) to evaluate a project’s overall embodied carbon emissions, driving demand for low-carbon solutions.

With the EC3 tool, designers can ask: How many carbon emissions are being released to make the product I’m specifying? “If you’re not choosing carbon-smart finishes, you’re missing the biggest opportunity you have to make a difference on climate,” says Mikhail Davis, Director of Technical Sustainability at Interface. Interface, the global flooring leader in sustainability, along with 30+ industry leaders, pushed to accelerate the development of the EC3 tool, given the importance of reducing greenhouse gases. Though Interface products already have an embodied carbon reduction focus, the company is determined to do more, with a goal of being a carbon negative company by 2040. Interface also is planning to launch its first carbon negative carpet tile next year, pioneering designs that help store more carbon than they emit. 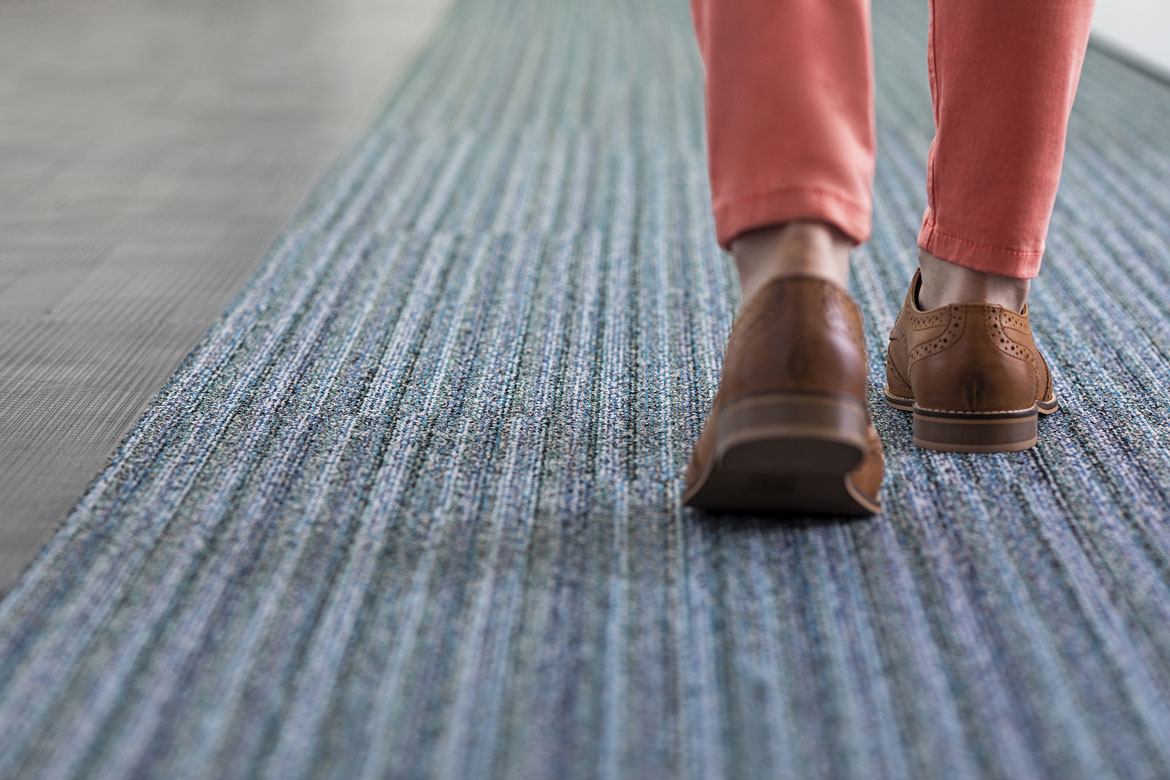 Interface has a vast portfolio of carbon neutral flooring, including WW865™ from the World Woven™ Collection.

“Those of us specifying and making products for the built environment every day can have such a positive impact on both the planet and public health outcomes,” says Lisa Conway, VP of Sustainability at Interface. “The power of smart specification decisions and understanding what is behind the materials we use is immense.” Sourcing materials that limit or reduce carbon emissions, like Interface’s portfolio of carbon neutral products—including carpet, luxury vinyl tile, and nora® rubber—is a vital step, and one manufacturers and designers can take today.

Time is of the essence, though. The urban built environment accounts for 75 percent of annual global greenhouse gas emissions, with buildings alone accounting for 39 percent, according to Architecture 2030. If the EC3 tool becomes integrated into daily processes, the design industry will lead the change our planet needs by seeking out greener manufacturing processes and building principles across the globe. From purchasing carbon offsets to smarter specification choices, designers and manufacturers have the power to help our ecosystem retain its balance, starting with a nuanced understanding of carbon.

These days, it seems like Planet Earth has a lot of environmental problems. It’s easy to get overwhelmed by the daily, myriad reports about Earth’s predicaments. Some of the biggest issues today include the plethora of plastic in the oceans, the disappearance of wildernesses to mono-cropping farmland, and the mounting levels of carbon dioxide in the atmosphere. But what if there was a way to turn a problem into a solution?

Four Ways to Specify for a Positive Impact

Four Ways to Specify for a Positive Impact

Did you know that the building sector is the world’s single largest emitter of greenhouse gases (GHGs)? Architects and designers have a huge opportunity to specify products that promote green chemistry, a circular economy, and a healthier climate. Seem impossible? With the right knowledge and tools, it’s easier than you might think.