As carbon dioxide (CO2) levels continue to rise in our atmosphere, more and more companies are realising they can make a difference by becoming carbon neutral. That is, ensuring their products or processes result in no net release of CO2 into the atmosphere.

Through Carbon Offsetting and Reduction Scheme for International Aviation (CORSIA), an initiative launched in 2016 by the United Nations’ International Civil Aviation Organisation (ICAO), airlines from 72 countries – including Australia, Indonesia, Japan, Malaysia, Singapore, South Korea and Thailand – indicated that they would offset the CO2 emissions from their flights starting from 2021.

U.S. transport and rideshare provider, Lyft, announced earlier this year that it was offsetting carbon emissions from all of its rides globally. All rides, carbon neutral.

Lyft’s co-founders made the announcement in this blog post on Medium, explaining how the company had recognised that the transport sector was one of the largest contributors to greenhouse gas emissions, and instead of being part of the problem, they wanted to be part of the solution. For Lyft, this is a future of more shared rides and clean vehicles.

The announcement was a bold move, one that surprised the market. It was a great example of leadership in tackling global carbon emissions and it was an invite for every customer to participate: every ride in a Lyft vehicle had become an opportunity to play a part in reversing global warming.

We’ve been on a similar journey at Interface. With our Carbon Neutral Floors™ program, all of our products are now carbon neutral — any product, anywhere in the world.

We have achieved this through more than 20 years of work analysing our carbon emissions at every stage of the lifecycle of our products beyond just the impact of manufacturing processes. We factored in everything from raw materials, suppliers, transport, use and end of life. Alongside this, our plants reduced their greenhouse gas emissions by 96 percent as we turned our back on fossil fuels and increased our use of renewable energy to 88 percent.

The result? A 60 percent reduction in the carbon footprint of our products to date.

Offsetting the remainder has enabled us to support projects focused on reforestation, renewable energy and fuel switching for more energy-efficient stoves — all through an independently-verified programme. In 2017, we sold over 26.2 million square metres of carbon neutral flooring, zeroing out 283,000 tonnes of carbon emissions – that’s the equivalent of the carbon absorbed annually by more than 1,250 square kilometres of forest. And we estimate that we will retire over 400,000 tonnes of carbon through Carbon Neutral Floors in 2018. 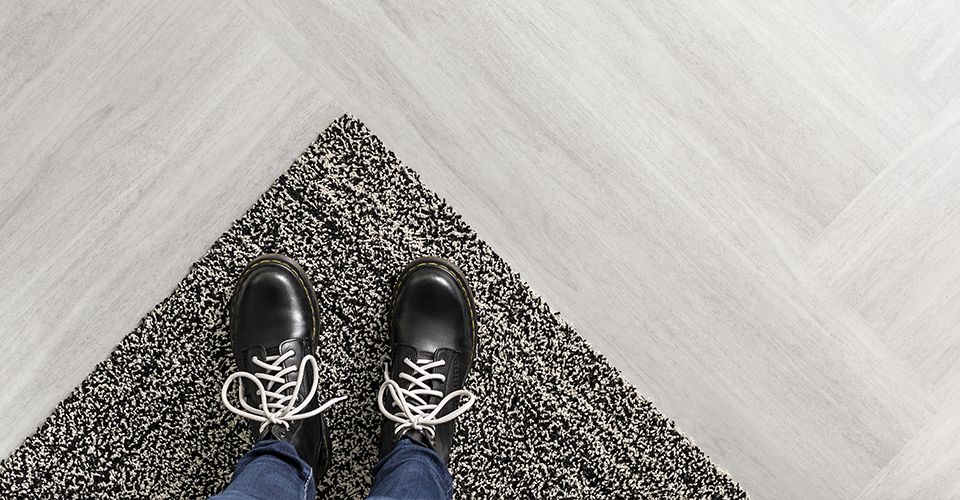 Interface’s Carbon Neutral Floors™ programme means that all of our products are now carbon neutral.

Climate change is a fact. We know there’s a problem, and we’re each increasingly aware of our own personal carbon footprint. Our buying habits are changing. We’re opting for locally sourced produce, eating less (or no) meat, offsetting the carbon emissions from our travels — all steps to reduce our carbon footprints.

Companies and governments have increasingly committed to going carbon neutral. The Himalayan nation of Bhutan – which forests now take in around three times more carbon than the country emits – made a bold pledge in 2009 to remain carbon neutral forever. Consumer goods giant Unilever has achieved carbon neutrality at a number of sites, and has a long-term ambition of being carbon positive by 2030.

In the built environment, architects are increasingly seeking to design with carbon in mind, choosing products based on their embodied carbon and the environmental and social impacts they have. We want to help our customers reach their goals on reducing carbon emissions.

How can you go carbon neutral?

Whether you request for a carbon neutral flight or specify Carbon Neutral Floors with Interface, the premise is the same: you have made a choice that will result in less carbon dioxide entering the atmosphere. It’s an invitation to take a stand against global warming. Each choice is another positive step toward a more sustainable future.

We expect the trend toward carbon neutral products to continue. And, we expect more people to ask for products with proven carbon neutral credentials. You can be part of this movement – just follow these three steps:

Learn more about Interface’s Carbon Neutral Floors program and how you can get involved in the Climate Take Back mission to run our business in a way that reverses global warming.

As one of the most prominent features in our built environment, flooring can play a vital role in impacting our wellbeing. But what is the latest development in commercial flooring that has the A+D world amazed? How a space ‘performs’ is no longer solely just about its aesthetic appeal. Certainly in the workplace, it is…