Beyond COP26 – An Action Plan for Change

On the 30 November, Interface partnered with Architecture Today to bring leading experts from the built environment together to reflect on COP26 and the Glasgow Climate Pact and consider the industry’s journey to net zero. Below is a reprint of Architecture Today’s summary of the webinar:

The recent COP26 climate talks held in Glasgow produced a raft of important new commitments aimed at limiting global warming – not least decarbonisation and curbs on methane emissions and deforestation. So how will the construction sector, which currently accounts for almost 40 per cent of global CO2 emissions, contribute to the latest environmental targets? An online seminar hosted by Interface considered this important question and how different stake holders within the industry can adopt and drive change. 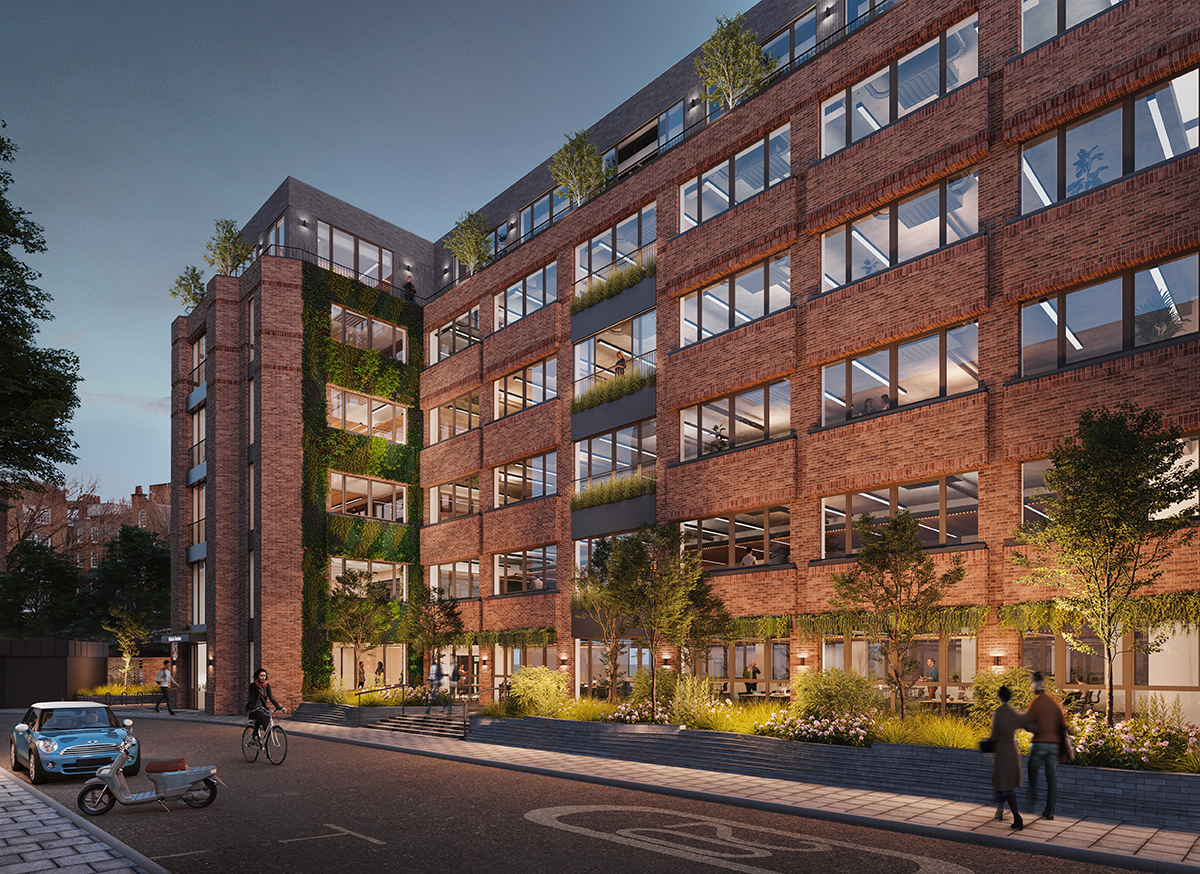 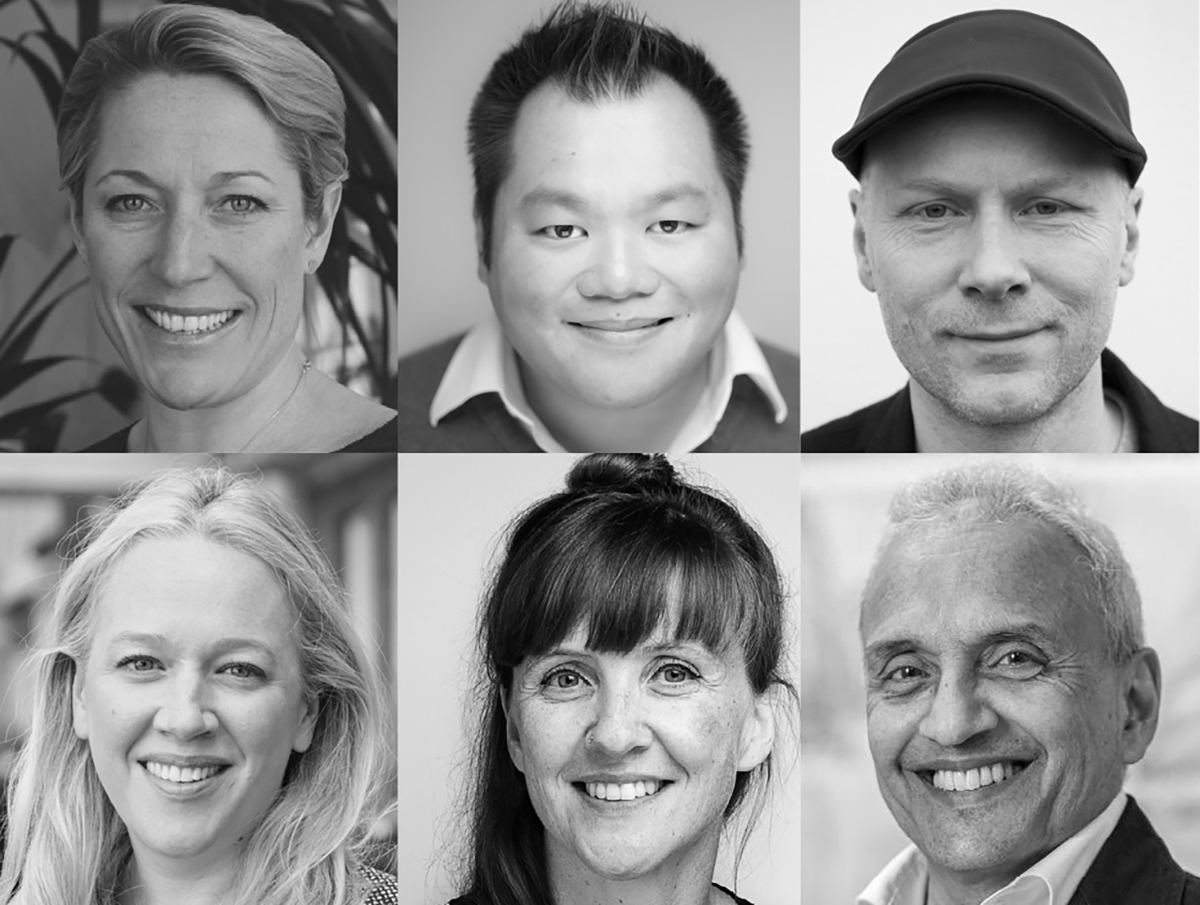 Julie Hirigoyen began the event by exploring the UK Green Building Council’s Net Zero Whole Life Carbon Roadmap for the UK Build Environment, which was launched at COP26, and whose goal is to identify a pathway for decarbonising the entire built environment sector. She explored in detail a modelled, built environment emissions trajectory based on the latest industry research. Encouragingly this showed the pace of change accelerating rapidly in the 2030s with almost all homes retrofitted with a fabric-first approach and low-carbon forms of heating by 2040.

But Hirigoyen cautioned against complacency, making the point that the industry and policy makers need to act fast to stand a chance of meeting decarbonisation targets. “It’s particularly important to achieve ‘near term’ carbon reductions by 2030,” she said, “as these are essential in terms of limiting the rise in global temperature to 1.5°C.”

In the final part of her presentation, Hirigoyen discussed five critical recommendations for policy and regulation makers, including, the nationwide retrofitting of existing homes, and energy performance disclosures for non-domestic buildings. She also flagged up the UKGBC’s Architects Action Plan, which covers whole life carbon assessment, performance metrics and targets, as well as post-occupancy evaluation, among other key environmental design tools. 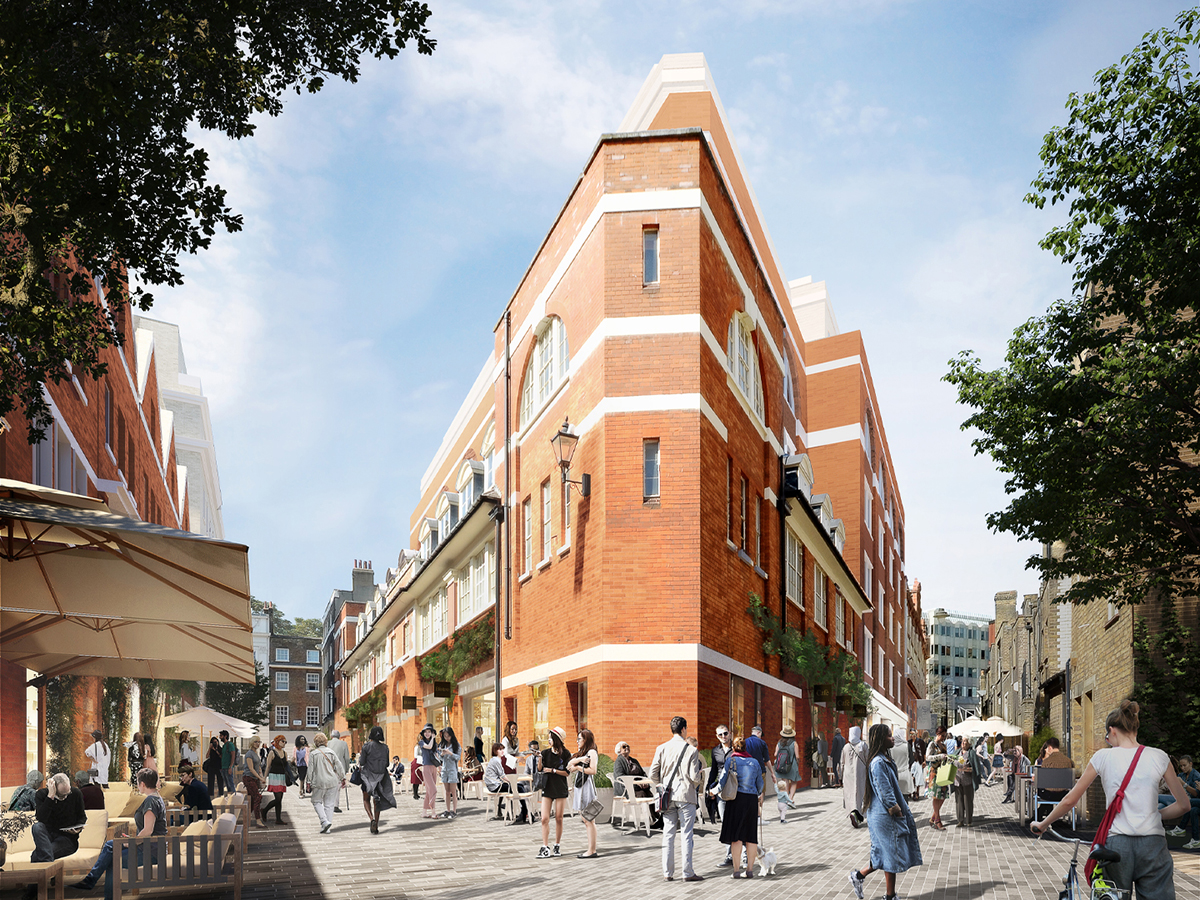 Anna Bond discussed Grosvenor’s environmental commitments and approach to building sustainable developments. Earlier this year, the company announced its intention to become carbon neutral across all scopes by 2025, and that it would only be designing net- zero developments (upon completion) from now on. Bond said that environmental tools, including annual roadmaps, environmental score cards, material innovation and investment, as well as supply chain engagement and training, will be central to achieving these goals.

Speaking about Grosvenor’s supply chain charter, Bond said “From 2023, we intend only to award contracts of over £1m to suppliers with a scienced-based target. We will also be running a mentoring programme to help SME suppliers set science-based targets for reducing GHG emissions.” Bond also underlined the importance of collaboration in meeting environmental targets. At present, Grosvenor is contributing to several joint industry initiatives, such as SteelZero, and is also part of UKGBC’s circular economy forum. 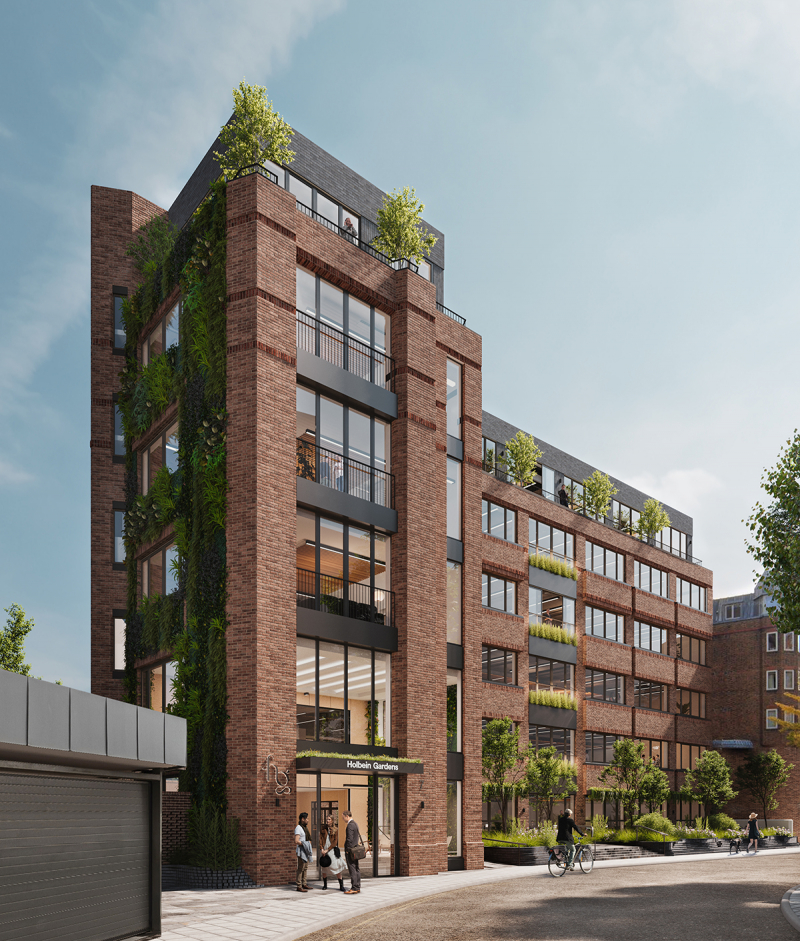 Bond finished her presentation with an overview of Holbein Gardens in London, which is set to become the company’s first net zero development. Powered by renewable electric energy, the scheme takes a holistic approach to embodied and operational carbon, and includes an early whole life carbon assessment, as well as the use of CLT and reclaimed bricks and steel.

Michael Pawlyn discussed his new book, ‘Flourish: Design Paradigms for Our Planetary Emergency’, which he co-authored with urbanist Sarah Ichioka, and explores the need for an environmental paradigm shift from the sustainable to the regenerative. Central to the publication and the authors’ position are five fundamental changes of mindset (explored across five chapters) needed to bring about positive and long-lasting results.

The first, and perhaps most important of these, is ‘possibilism’ or how we transform our ideas of agency. In Pawlyn’s opinion the construction industry and society in general tends to shun agency and responsibility, resulting in a slow pace of change. Being optimistic or pessimistic about the future is also unhelpful, he said, as both positions imply a sense of inevitability. The possibilist approach, by contrast, is characterised by evidenced-based action and managing uncertainty. “It’s not enough to be an optimist about the potential of future technology in a planetary emergency,” said the architect. “We need plans for the future with numbers that add up.” 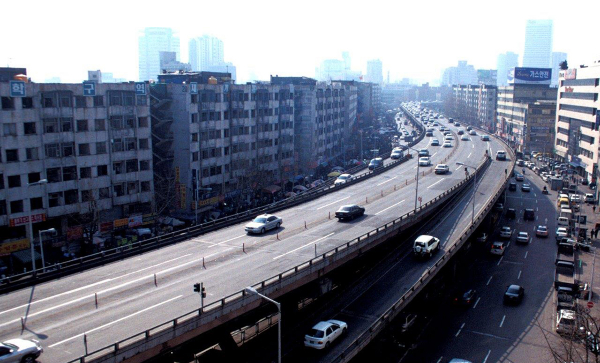 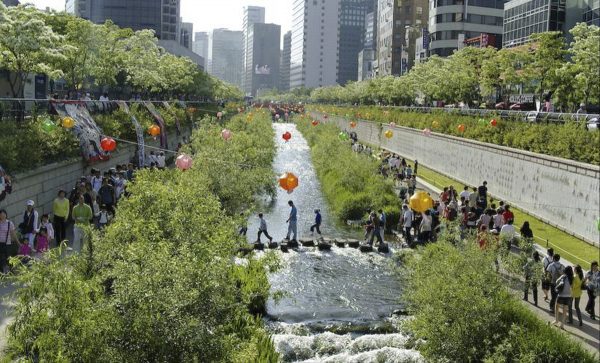 Pawlyn then touched on chapters two to five, which explore a range of thought-provoking themes, including the need for humans to coexist with the natural world, what it means to be a good ancestor, symbiogenesis and the built environment, and how ‘doughnut economics’ might represent the best model for long term planetary health. “The paradigm shift may look daunting, amounting to a transformation of human consciousness,” concluded the architect. “But the prize that’s on offer is so great that it’s a challenge that we simply have to confront.”

Jon Khoo gave a manufacturer’s perspective on sustainability, which in the case of Interface is to become carbon negative by 2040. He argued that whatever products or services a company sells, it can and must make a difference. “Now is the time for pledges to make way for actions,” he urged. Leading by example, Interface has reduced the carbon footprint of its products by around 75 per cent since 1990, and now supplies only carbon-neutral flooring solutions. This has been achieved through a range of initiatives, including reengineering products, using less and different materials, increasing reliance on renewable energy, and employing verified carbon offsets. 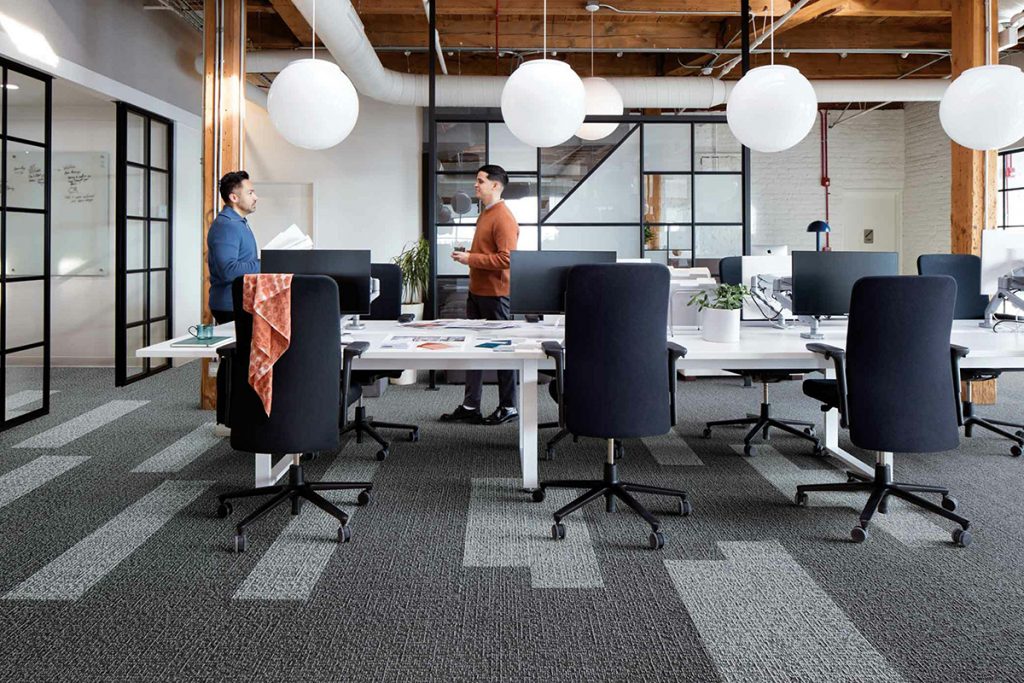 Khoo used the company’s innovative, carbon negative (cradle to gate) Embodied Beauty carpet tile collection and CQuest Bio carpet tile backing as exemplars of this multipronged approach. CQuest Bio eschews traditional bitumen in favour of a sustainable bio-composite alternative, reducing the carbon footprint of Interface products by more than 30 per cent. Furthermore, Interface flooring with CQuest Bio backing now comprises 88 per cent recycled and bio-based materials. As Khoo succinctly put it, “Recyclable is a promise. Recycled is a fact. You need both, but using increased recycled content has a more immediate impact.”

Despite these substantial gains, Interface has set itself tough environmental targets for 2030 – namely to reduce CO2 emissions relating to both its site operations (Scope 1 and 2) and supply chain (Scope 3) by 50 per cent. As the company’s late founder Ray Anderson said, “We have a choice to make during our brief visit to this beautiful blue and green planet; to hurt it or to help it.” 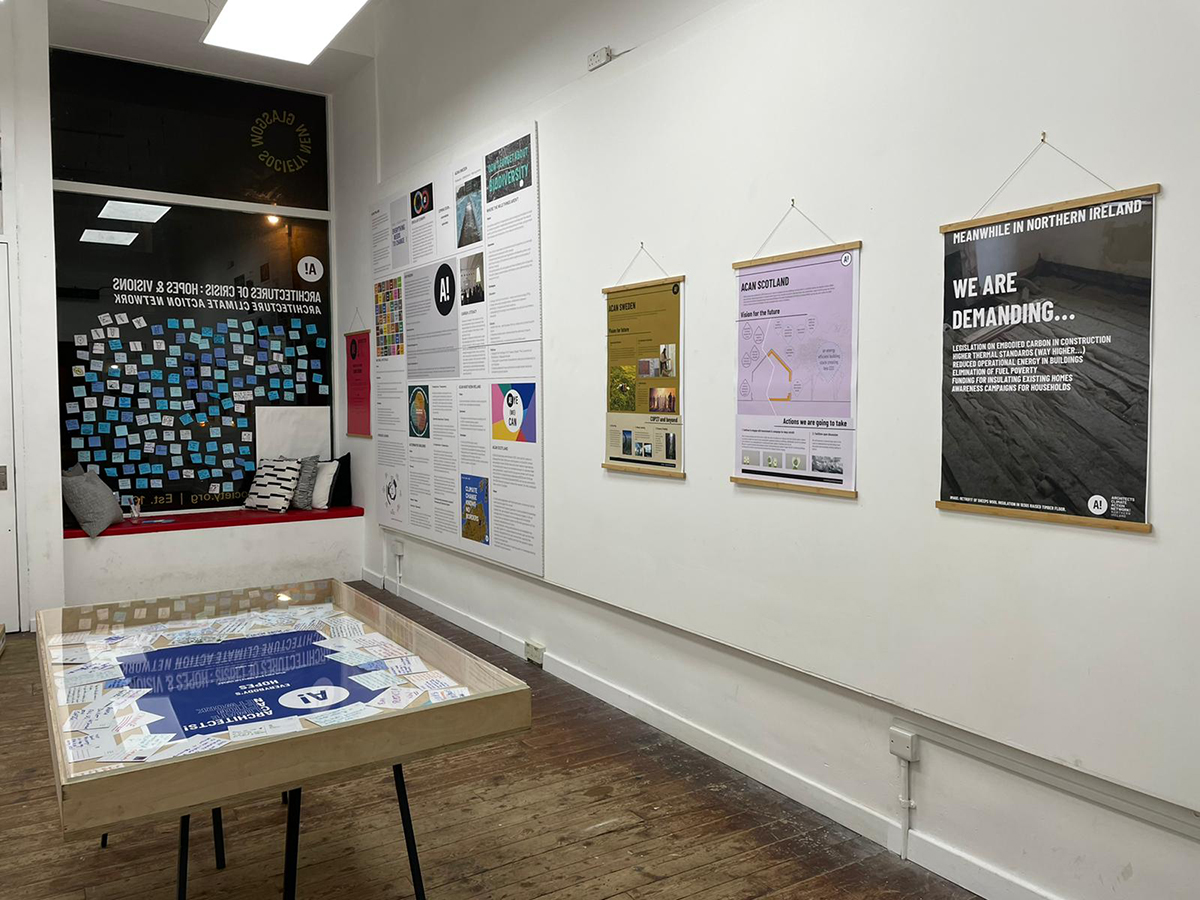 Sara Edmonds presentation focused on the Architects Climate Action Network’s activities at COP26 and priorities post event. The architect and campaigner described the environmental summit as deeply connecting and invigorating for ACAN participants, with the group undertaking collaborative events, staging an exhibition at New Glasgow Society Gallery, and even hosting a satirical comedy night. Post COP, ACAN’s eight working groups are focusing on a range of pressing issues, from campaigning for a national retrofit strategy to developing a guidance document on how to apply circular economy principles across the RIBA stages. 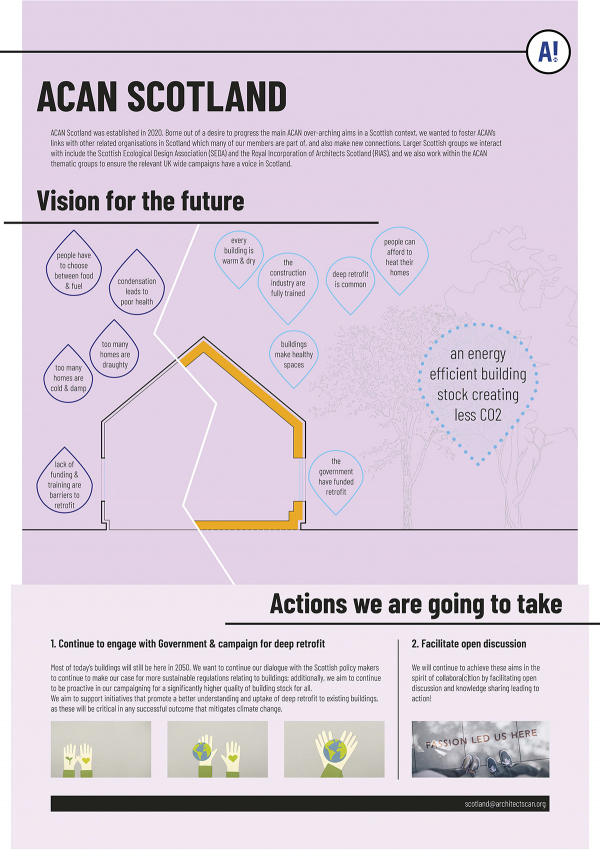 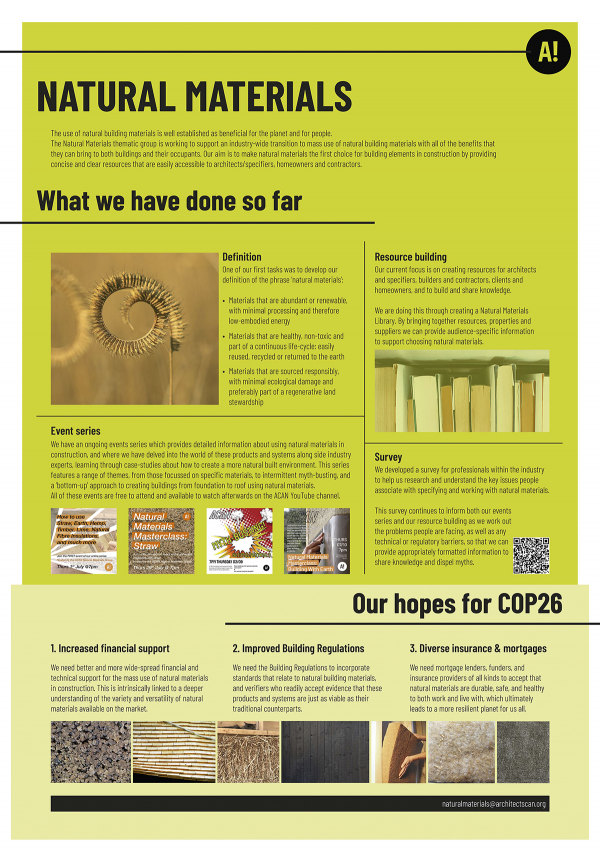 Looking to the future, Edmonds stated that the UK will not meet its legally-binding climate change targets without practically eliminating greenhouse gas emissions from buildings. “The decisions we make as architects have far reaching consequences,” she said. “It’s not just about ‘tweaking’ the field of architecture; it’s about completely reimagining it; it’s about moving from degenerative to regenerative practices.” Concluding her presentation, Edmonds gave an impassioned call to action for the profession. “If you don’t know what your agency is yet, then get to know it,” she urged. “Join a group or dial into a meeting. It [climate change] is not a complex problem to understand, we’re in trouble and we all have a responsibility to act.” 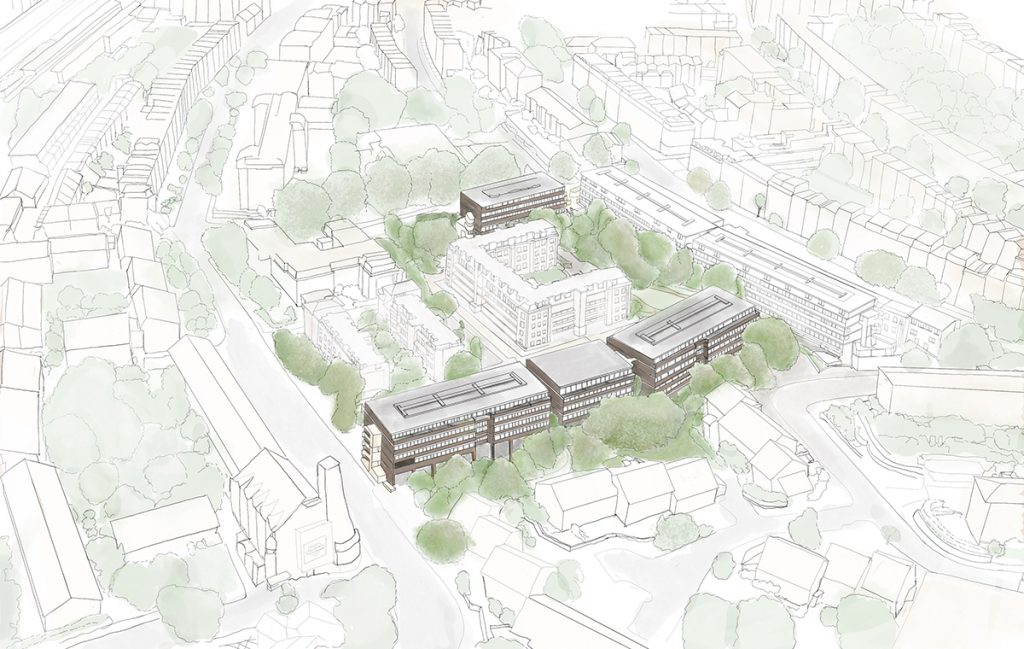 Architect and UKGBC chair Sunand Prasad congratulated the other speakers on their inspirational presentations. He questioned whether the lack of a joined-up approach towards sustainability and achieving net zero across the construction sector was the most critical issue at present. “The industry is undeniably fragmented and has major structural issues that date back to the 19th century,” he said. “We should therefore keep trying to join up and be more collaborative in our approach, but this is not a silver bullet.” Instead, he felt that activism was more important at present, particularly the need to confront and take on climate change deniers and other groups who have vested interests in maintaining the status quo. “The situation is urgent,” he said. “So we have to act urgently.” 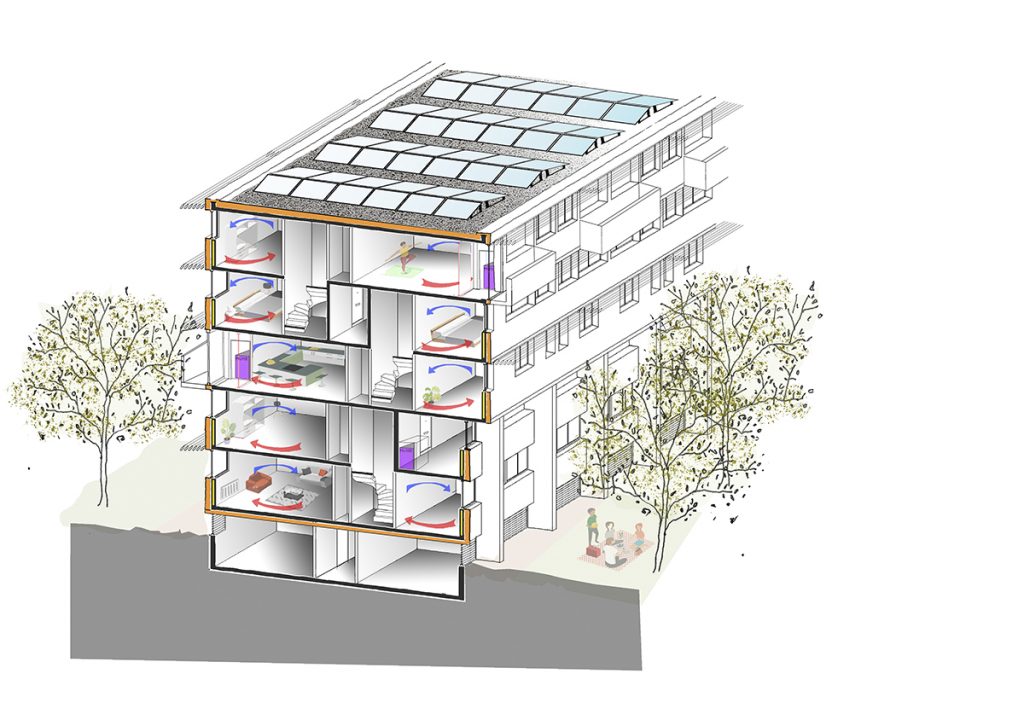 Lancaster West Estate axonometric section. Homes will be made more energy efficient through the replacement of two existing district heating systems, as well as the installation of triple-glazed windows, high-quality, non-combustible insulation, and new ventilation systems.

Speaking about driving change within the industry, Prasad said “We need to act almost independently of national governments and instead collaborate more closely with city governments and local authorities at a more tractable scale.” Her also echoed Sara Edmond’s point, that architects need to break out of their ‘silos’ and become more involved with the wider construction sector. “There is already so much to act upon that everyone can get involved right now,” he said. Fittingly, the architect’s final comment summarised – for many – the current situation: “There is no shortage of [climate change] solutions. The issue is not about solutions, it’s about the will to act and the need to get on with taking the measures that are required.”

A recording of the full webinar can be found here.

At COP26 I’m seeing a trend for stubborn optimism amongst the delegates. To me, stubborn optimism requires balancing reality, hope and conviction. The science is clear on the increase in greenhouse gas emissions (including carbon) and that temperatures are rising – businesses, governments and society have to respond

IPCC Report – a Code Red for Humanity and the Built Environment

IPCC Report – a Code Red for Humanity and the Built Environment

The report highlights that, “it is unequivocal that human influence has warmed the atmosphere, oceans and land”, and continues to explain that unless there are drastic cuts in carbon emissions in the short-term, the world will fail to limit temperature increases to below both the 2◦C and 1.5◦C targets outlined as part of the Paris Agreement in 2015