As the dust settles from the Glasgow Climate Pact and COP26 and there’s a renewed sense of urgency to design paths to net zero and beyond, it’s never been more important to democratise the new ideas and solutions to protect our planet. With the recent release of the latest IPCC report on climate change highlighting that the scientific evidence is unequivocal and that 40% of the world’s population is highly vulnerable to its impacts, the size of the challenge seems steep. But a new podcast and book are leading the conversation focusing on the theme of possibilism – that is still possible to make a difference – giving hope whilst also provoking designers into action on the climate crisis.

Hosted by urbanist Sarah Ichioka and Michael Pawlyn, the Co-Initiator of Architects Declare, the podcast Flourish Systems Change based on their co-authored book – Flourish: Design Paradigms For A Planetary Emergency, which navigates through the ideas of regenerative practice to shape the future of the built environment. 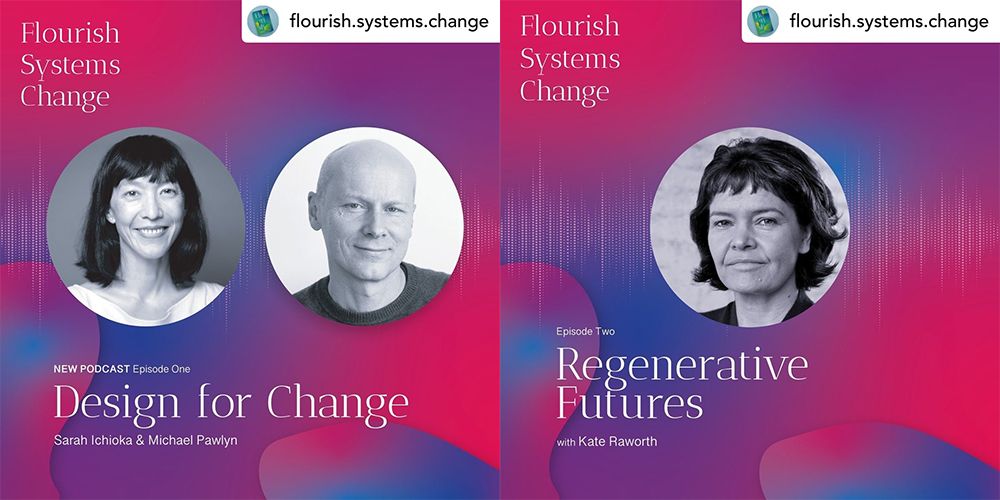 The Power of the Doughnut

One such idea is Doughnut Economics, and in episode two of the podcast leading economist and author, Kate Raworth shines a light on her work on regenerative futures through her model.

As Raworth explains, the foundation of the Doughnut is a decision-making framework that matches the needs of all people to the means of the planet. Viewing the model it takes the form of two concentric rings – the inner ring representing the social foundations we need to thrive, and the outer ring the ecological ceiling that needs to be considered so that we don’t overshoot our planetary boundaries – as there is no Planet B to turn too. 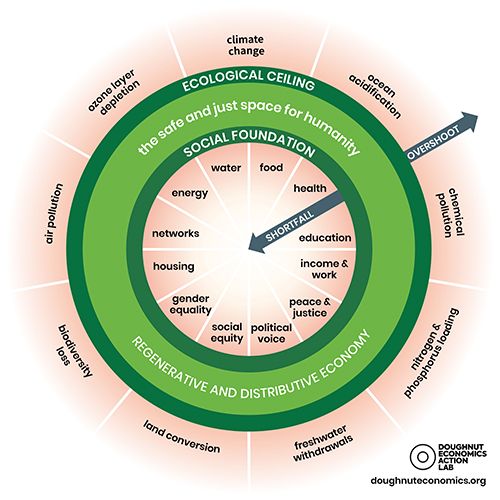 The podcast discussion opens up some smart ideas exploring the relationships we can draw between the planetary body and the human body to teach and inspire the next generation:

For businesses this trajectory of supporting the planet, people and profit is about balance and adding value. At Interface our sustainability mission, Climate Take Back commits to run our business in a way that reverses global warming. The premise of drawing insight from how we approach human health to explore planetary health is a strong idea that will contribute towards creating a climate fit for life.

To conclude this inspiring discussion Raworth mused “So, I think we’re entering an era in which the dashboard of metrics is going to be the true valuable method by which we measure and assess the state of health whether it’s the human body or of the planetary. And that means we need to learn which numbers to bring together, how best to represent them… what the Doughnut aims to do in a very simple visual show with red, red lines falling short into the centre or red lines overshooting on the outside. This is a visual readout of the state of humanity in the living world.”

As Michael and Sarah sum up the discussion, they mention Interface’s Factory As A Forest project, worked on in collaboration with Janine Benyus and Biomimicry 3.8. Exploring how, the design of any building – whether it is a factory, a house or an office – could be influenced by the ecosystem that surrounds it and could learn from mimicking nature on carbon sequestration, food production, water filtration, etc. That this would represent a great step toward regenerative design.

The Interface supported podcast series is now available on Apple Podcasts, Google Podcasts, and Spotify, and also via the Flourish website, where you can also read transcripts of each of the interviews.

To discover more on the work of Kate Raworth and the doughnut, check out the Doughnut Economics Action Lab.

The world of sustainability and climate change can seem complex with its many terms and interpretations, in the Sustainability Unravelled series, we take a key term or trend, break it down to the key facts and provide ideas on the best questions to ask to compare products and services accurately.

Here at Interface, we are passionate about our commitment to creating a climate fit for life and our mission to reverse global warming. We realize that some of the terms related to our goals use technical or niche language that we don’t use every day, so we’d like to provide a deeper dive into what some of our latest initiatives really mean.