Designers are optimists. They find the good in a space and work to enhance it, creating a positive impact on its inhabitants. The goal: to go beyond productivity and provide inspiration. Interface wants to celebrate these positive spaces.

While few people would refer to a bank of airline seats as a positive space, it functioned as one 20 years ago when Yelp’s Senior Director of Real Estate & Facilities, John Lieu, and Primo Orpilla of O + A met coming back from NeoCon. There, a conversation began not about design, but tennis, creating a friendship that ultimately led to major collaborations over the years.

John’s career took him to different Silicon Valley start-ups that were seeking fresh looks for their communal workspaces. Primo and Studio O + A collaborated on many projects, including shopping.com, eBay and Facebook. What evolved was the minimalistic approach to office design now sought after by not just the tech world, but also many traditional industries seeking communal work environments. Today, John and Primo are responsible for the outstanding look and feel of many Yelp spaces, including the corporate offices housed in the refurbished PacBell building in the SOMA district of San Francisco.

When the project launched, Yelp was young but fast growing, and it became evident that they would rapidly outgrow their space. John knew that moving into the re-configured PacBell building was a golden opportunity to locate close to the businesses they support. “Culturally and design-wise this would be the first time Yelp ever put time, money and effort into a new look and feel. We wanted to make sure that not only our culture was reflected, but also what Yelp is all about.” 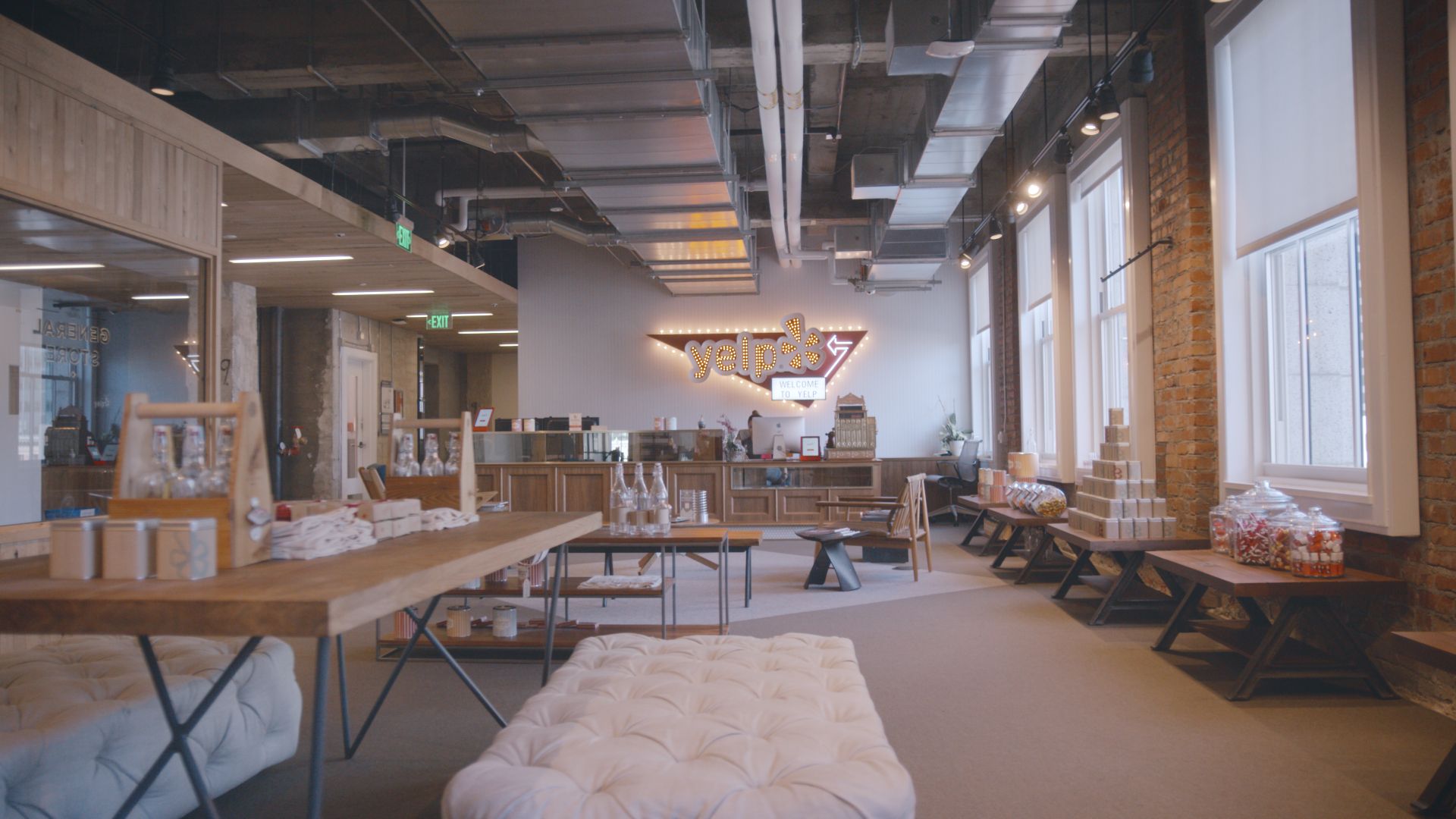 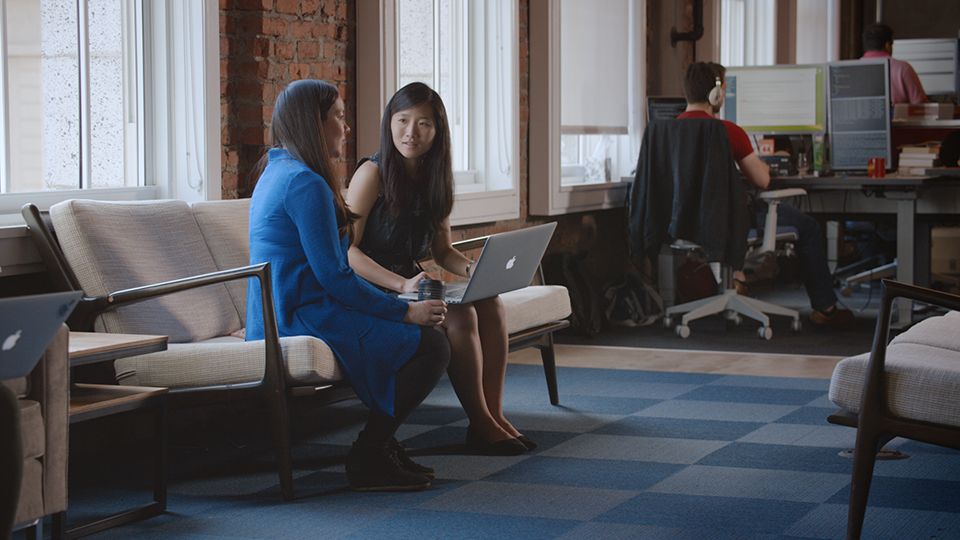 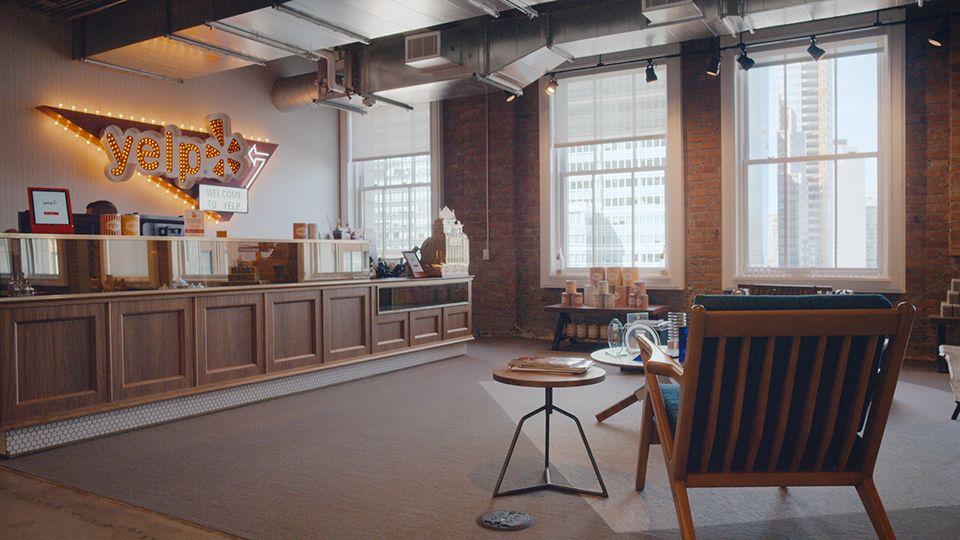 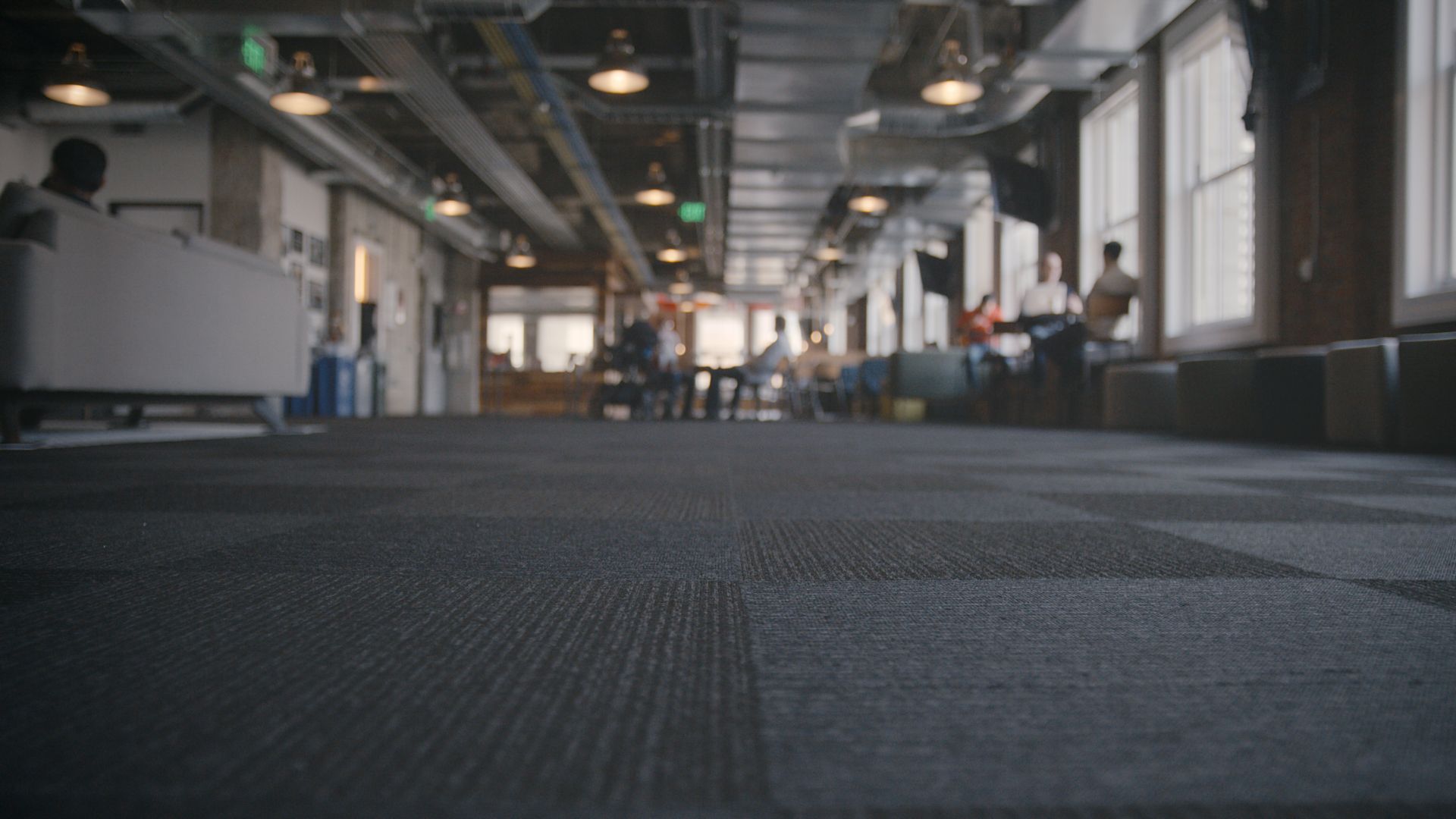 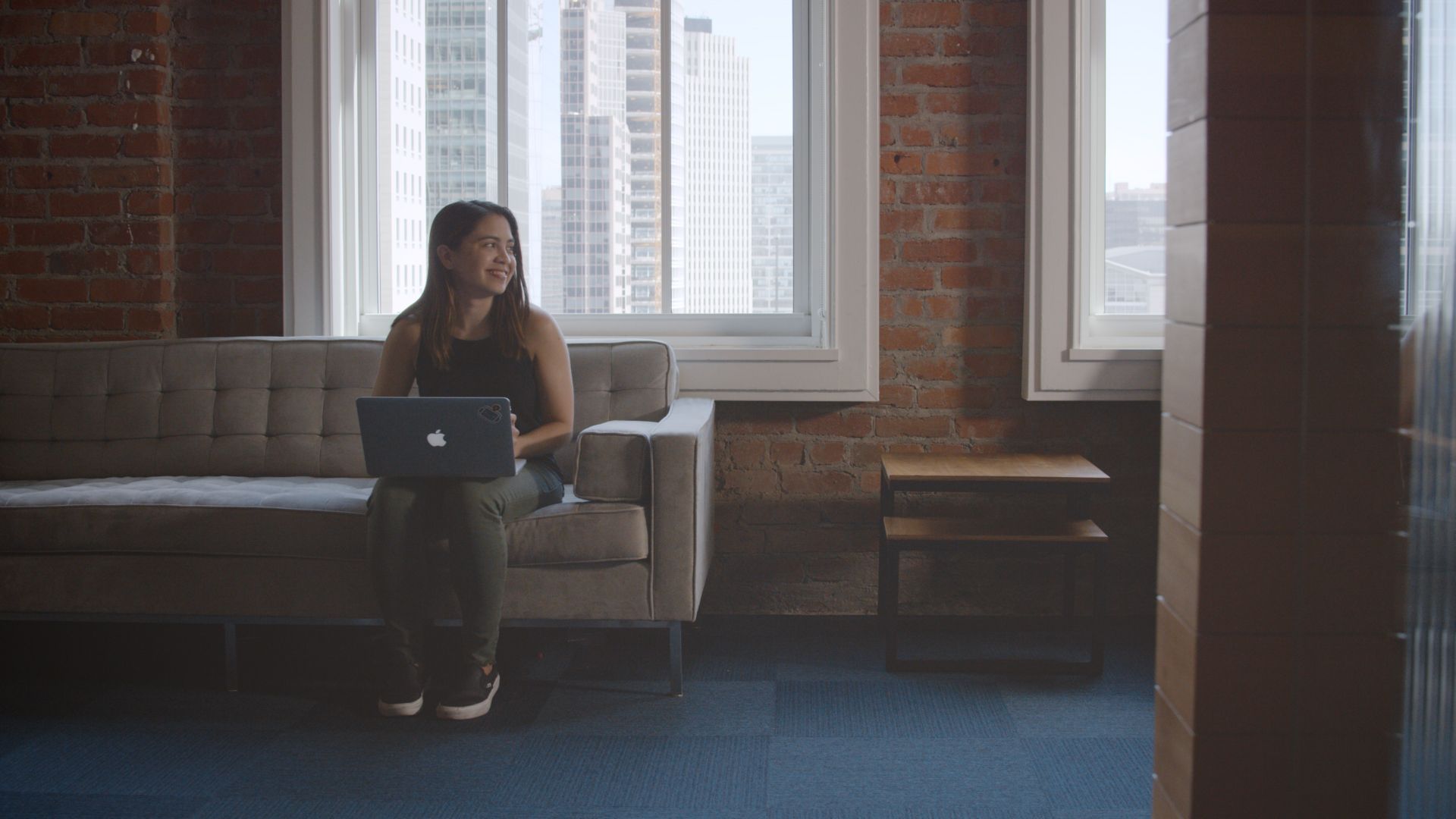 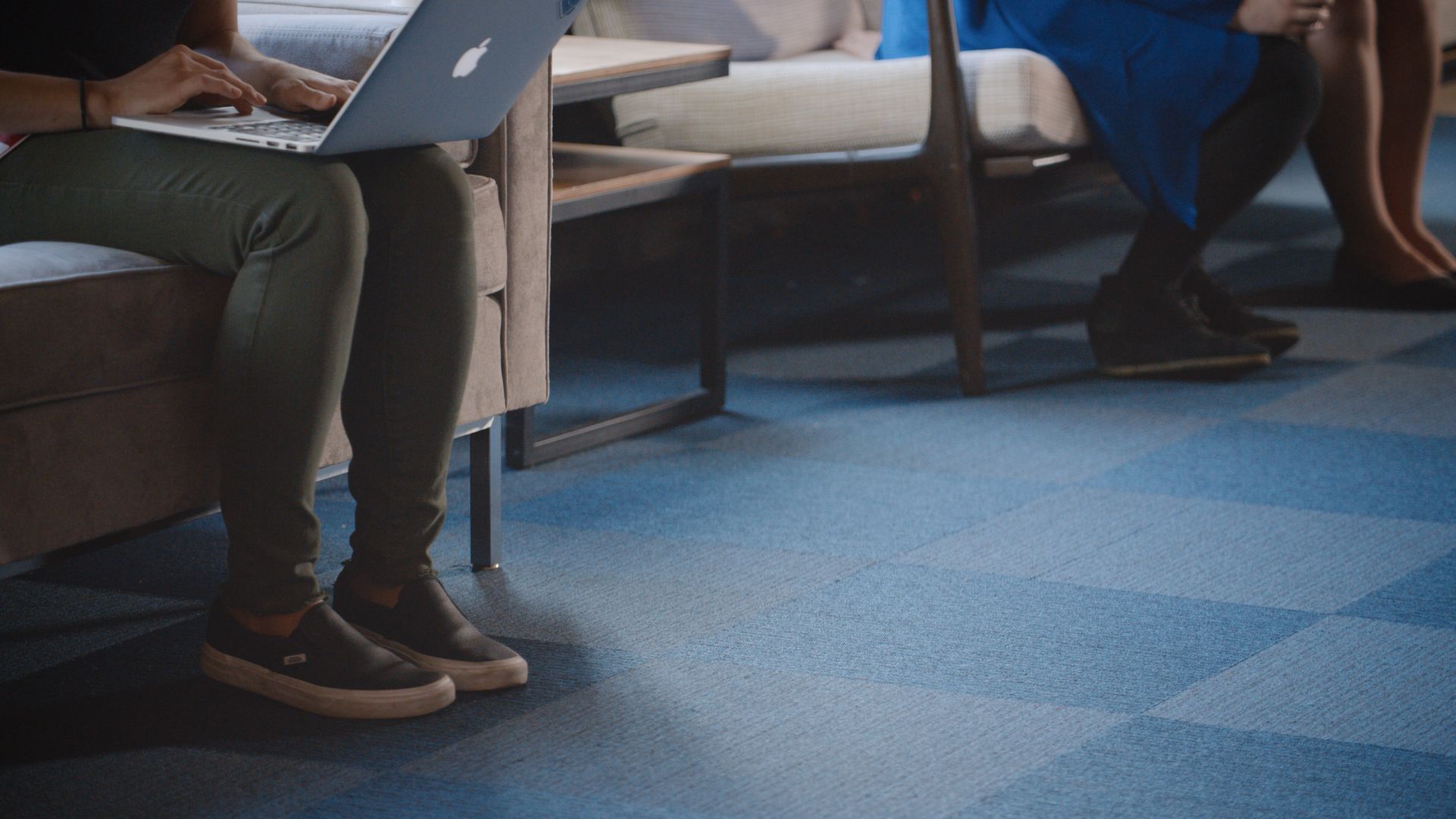 Understanding that Yelp wanted to reflect the vibe of local businesses and needed a range of spaces, the idea for the design took shape. Collaborative areas as well as quiet ones in various sizes were considered. And like many newer companies, Yelp was drawn to the clean look of concrete floors, which typically aren’t acoustically practical for a big company with communal work areas. A solution was needed.

Studio O + A turned to its own space for ideas. Highly collaborative, they also employ noise-reducing surfaces, having found an ideal solution when they redesigned their own office. Searching for a clean, minimalistic look, they gravitated to a carpet style from Interface Europe’s library. Interface then reinterpreted it and manufactured it in their US mill. Now it’s become a go-to selection for many of Primo’s projects, including the Yelp corporate office. 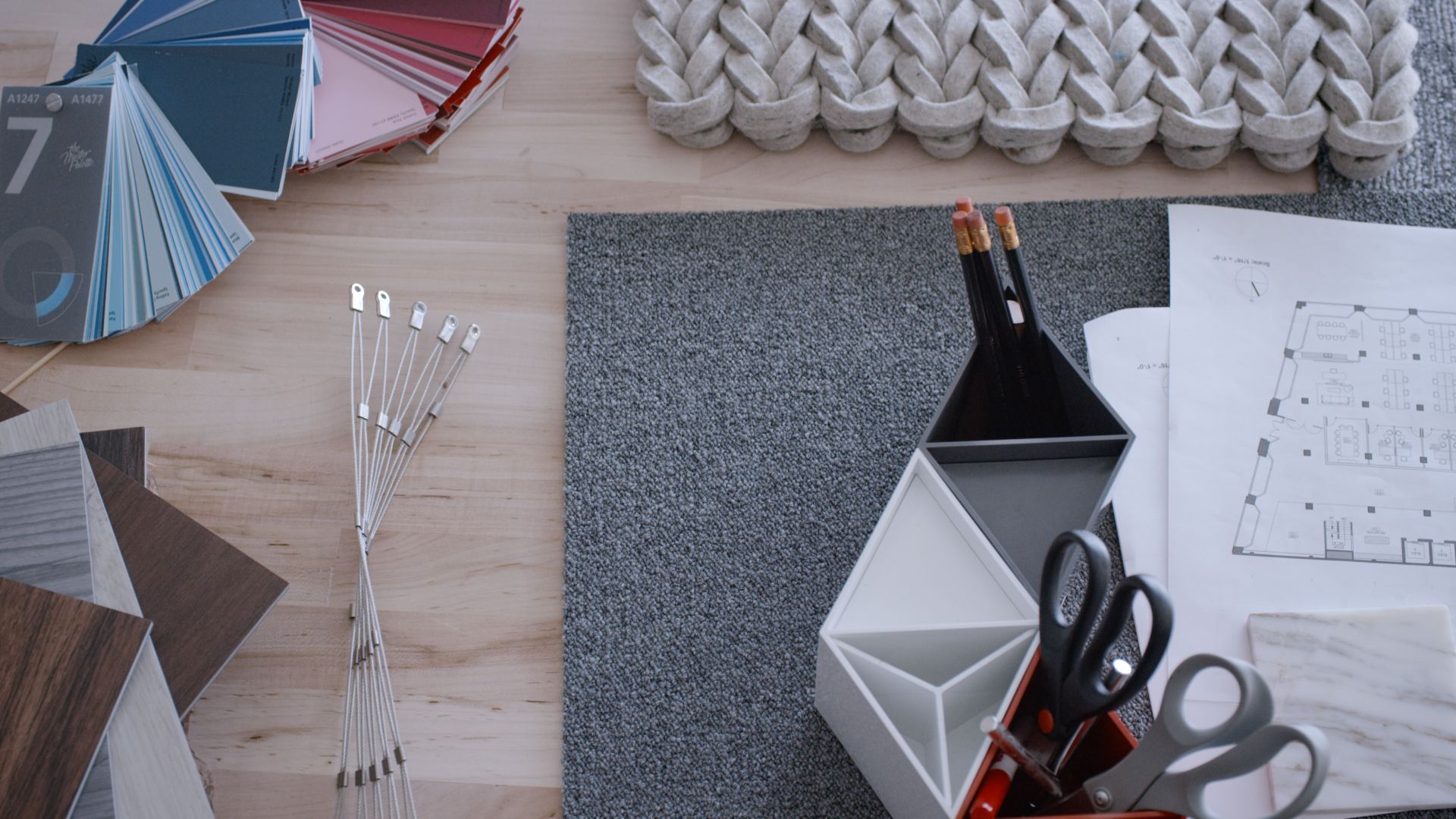 It can be tough to keep product lines fresh when minimalism continues to be a quality clients ask for, but for Primo, Interface was attune to this from the start. “Interface is extremely conscious of patterns and colors and textures they’re putting out there. They’re constantly revising much the same way a fashion house has to change their collection. Interface has that feel. Others may have begun doing that, but they were the first. And they do it very well.”

As a trusted partner, Interface was able to step up and provide exactly what the project needed: a flooring choice with minimal impact that provided the foundation for Yelp’s culture to thrive, as well as ensure–that their “Yelpiness” (as they refer to it) was the overarching impression.

With a subtle palette and texture selection for minimal visual impact, these super-low profile and structurally sound carpet tiles played a critical role in telling the Yelp office story. Because when you think about it, for them, this particular Interface product functions as the office version of the sidewalks and streets that link businesses. It was ideal for Yelp with its lobby that looks like a modern version of the general store, a nod to the traditional community gathering spot that existed long before the Internet. Other hints of the local business vibe include touches like conference rooms named for Yelp categories: restaurants, health and beauty, auto repair, etc.

For over two decades, John and Primo have worked together to create these incredible environments and all along the way Interface has proudly been a part of this partnership. According to Primo, Interface has been an integral part of many of his projects because, “they’re not here to sell a product. They’re here to solve a problem and they do it without compromising design aesthetics. Then everybody wins because the project goals aren’t just met. They exceed expectation.”

In the end, it’s about cultivating environments and relationships and moving people and ideas in positive, productive ways. Tell us about the positive spaces you’re developing and defining. Join the conversation. #PositiveSpaces.

Offering stylish furnishings from globally responsible sources, West Elm grew up in the Brooklyn neighborhood of DUMBO (Down Under Manhattan Bridge Overpass). Their commitment to community initiatives, dedication to personal retail service, and desire to connect global artisan markets to their customers made them a magnet for attracting the millennial shopper. When their business took…

There’s been a wealth of evidence in recent years demonstrating a clear and measurable link between the way a space is designed and the productivity of workers. Here at Interface, we believe that design of a space should enhance the mood, productivity and creativity of those using it. Positive design is about making a space…