Offering stylish furnishings from globally responsible sources, West Elm grew up in the Brooklyn neighborhood of DUMBO (Down Under Manhattan Bridge Overpass). Their commitment to community initiatives, dedication to personal retail service, and desire to connect global artisan markets to their customers made them a magnet for attracting the millennial shopper. When their business took off, a much bigger, more versatile space was needed. And so began the West Elm DUMBO project that would include not only corporate offices, design studios and workshops, but a retail store as well.

For West Elm, staying in the neighborhood they grew up in was an easy decision considering their company philosophy: Community, Consciousness, Choice. They chose the Empire Stores building. Located on the Brooklyn waterfront, this former coffee warehouse built in the late 1800s had stood empty for over 50 years. Now it was poised to become the architectural cornerstone for this revitalized area. West Elm saw the potential and began the grand plan to move into its new headquarters in the fall of 2016. 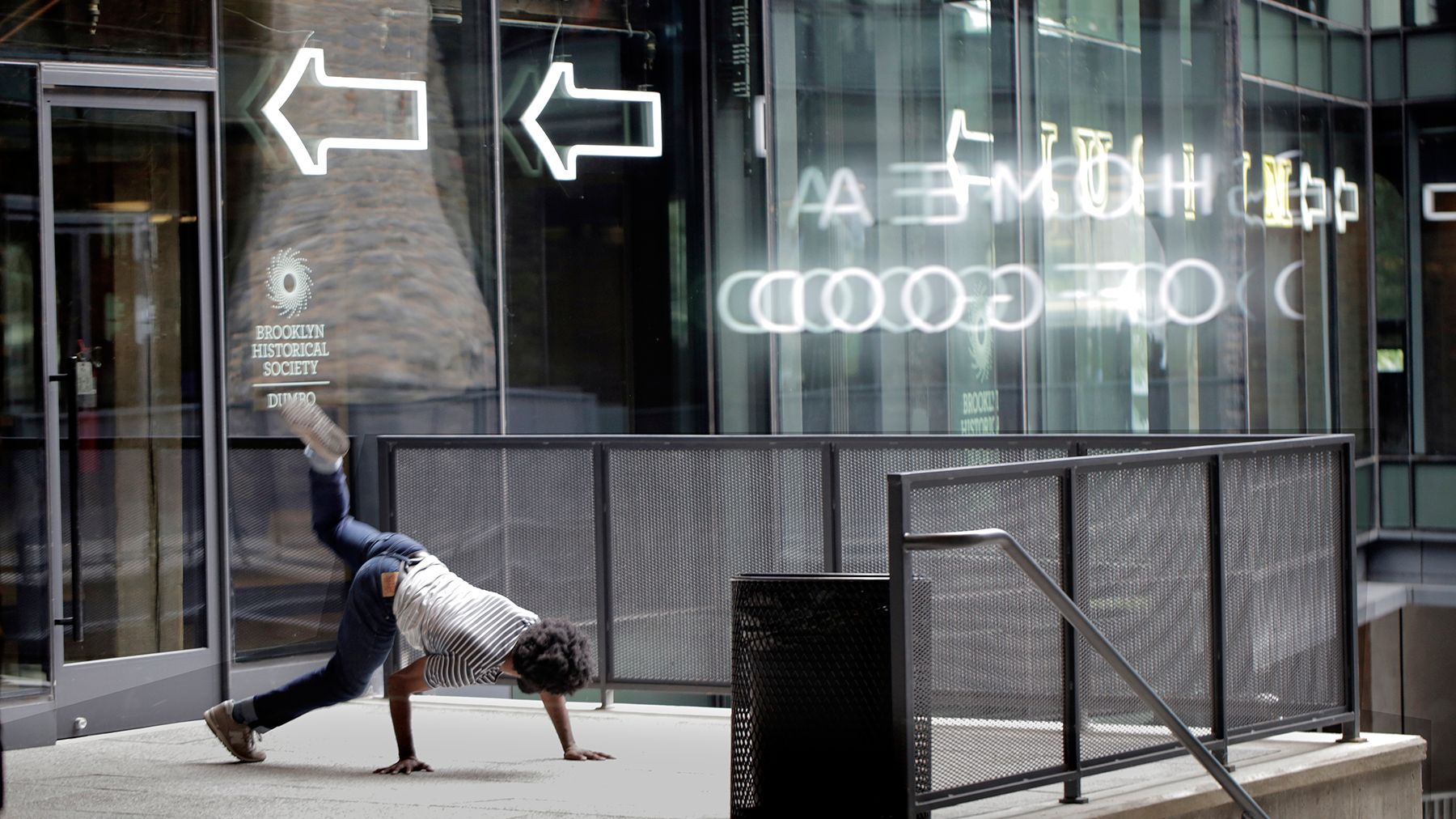 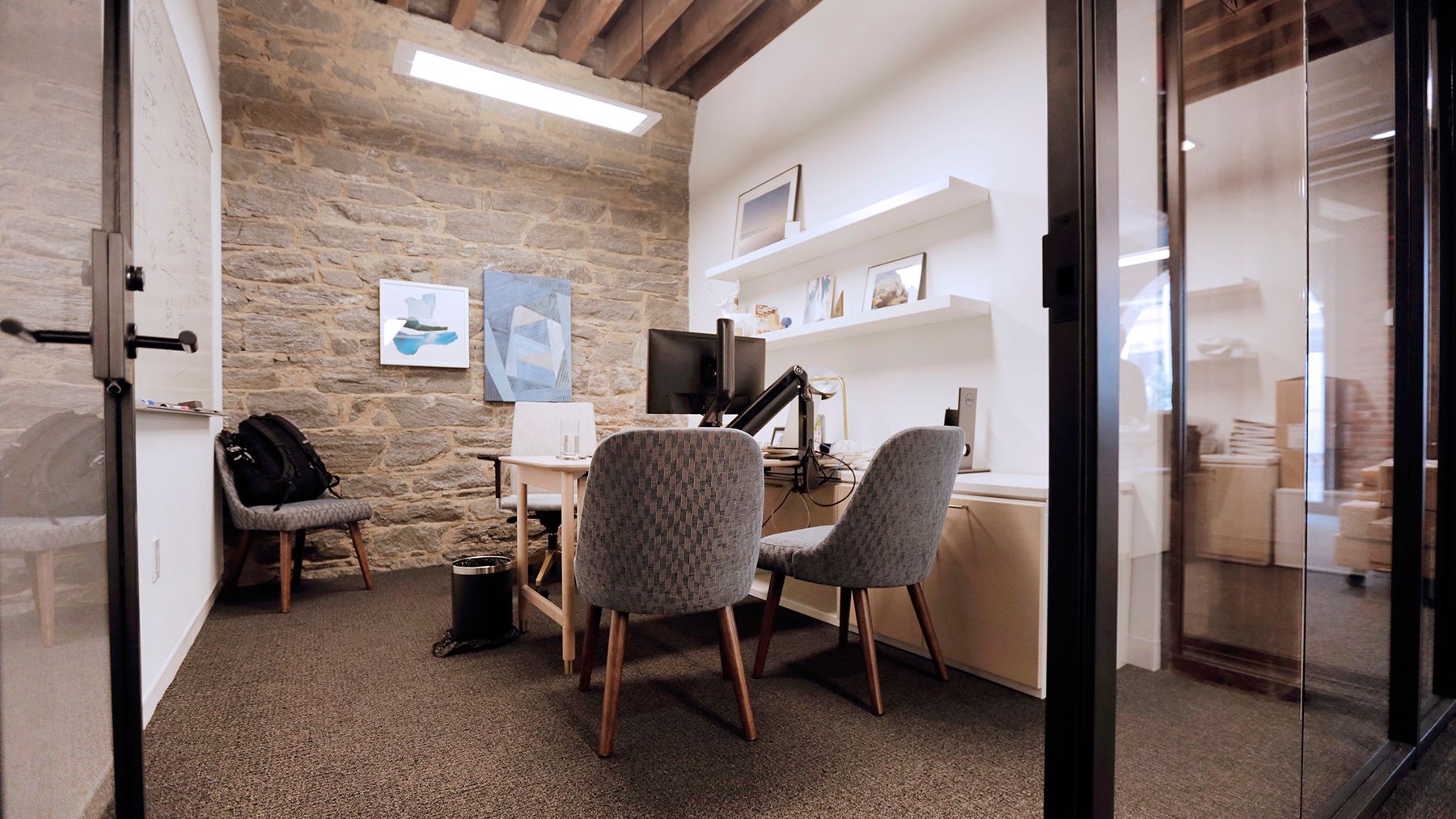 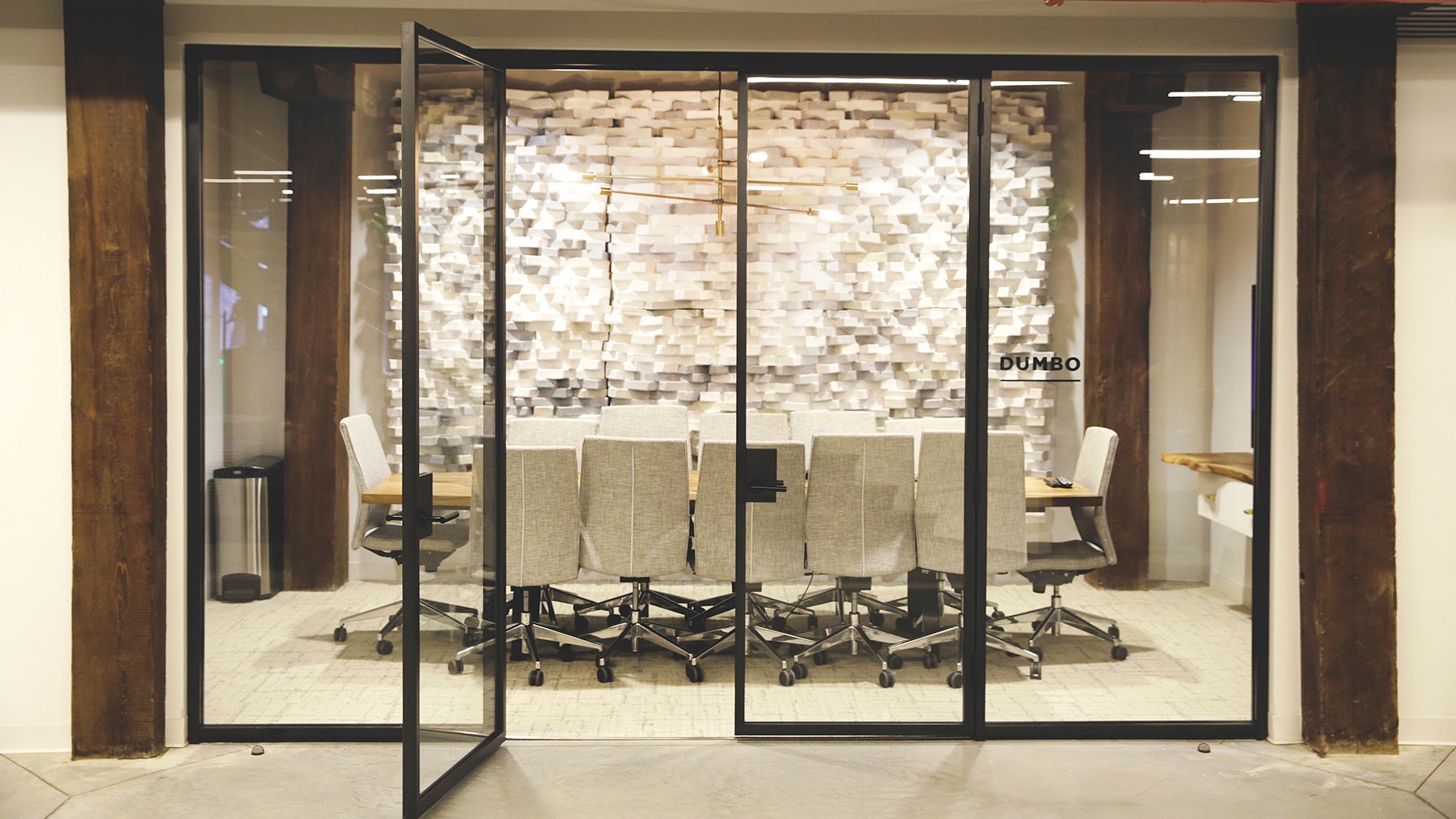 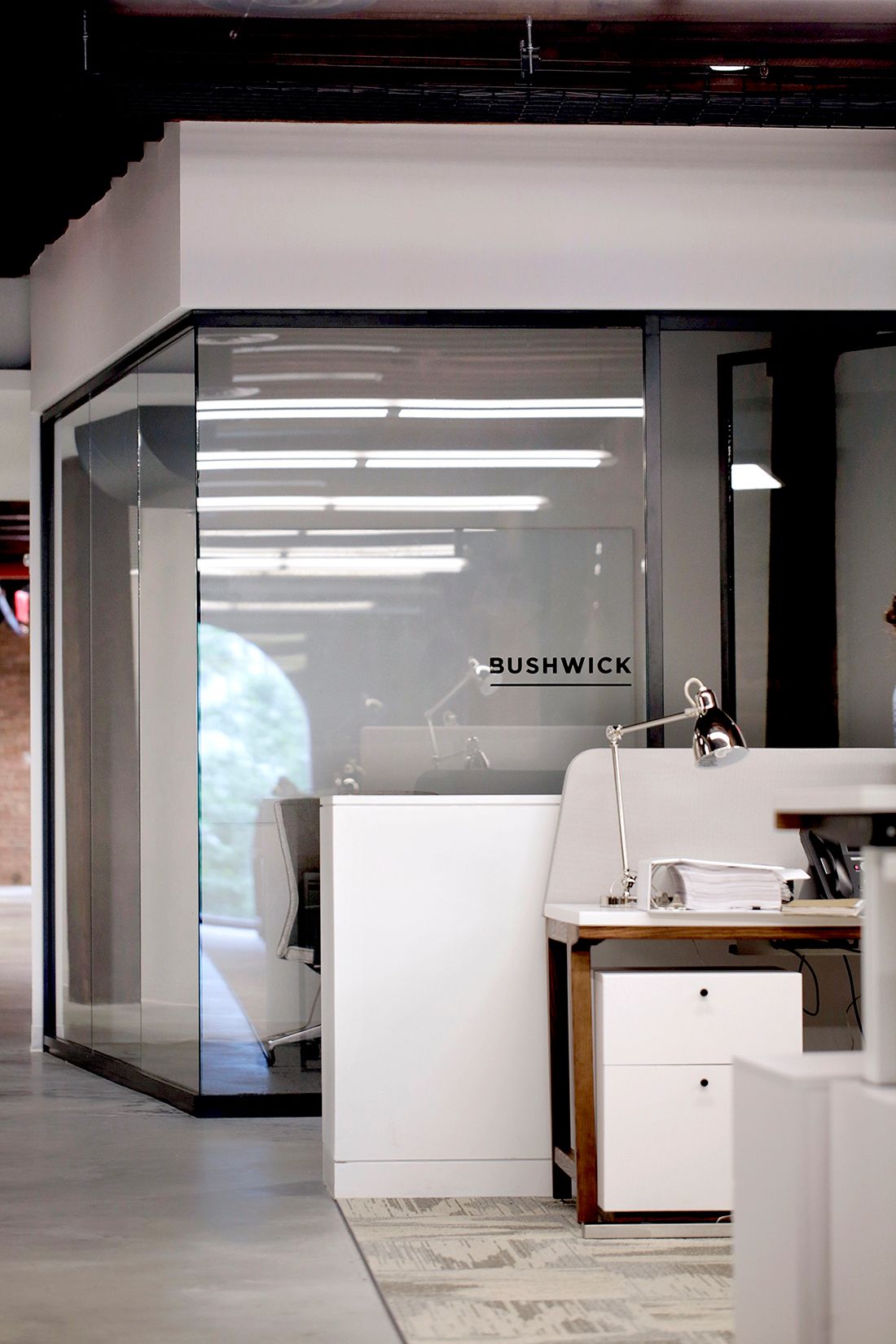 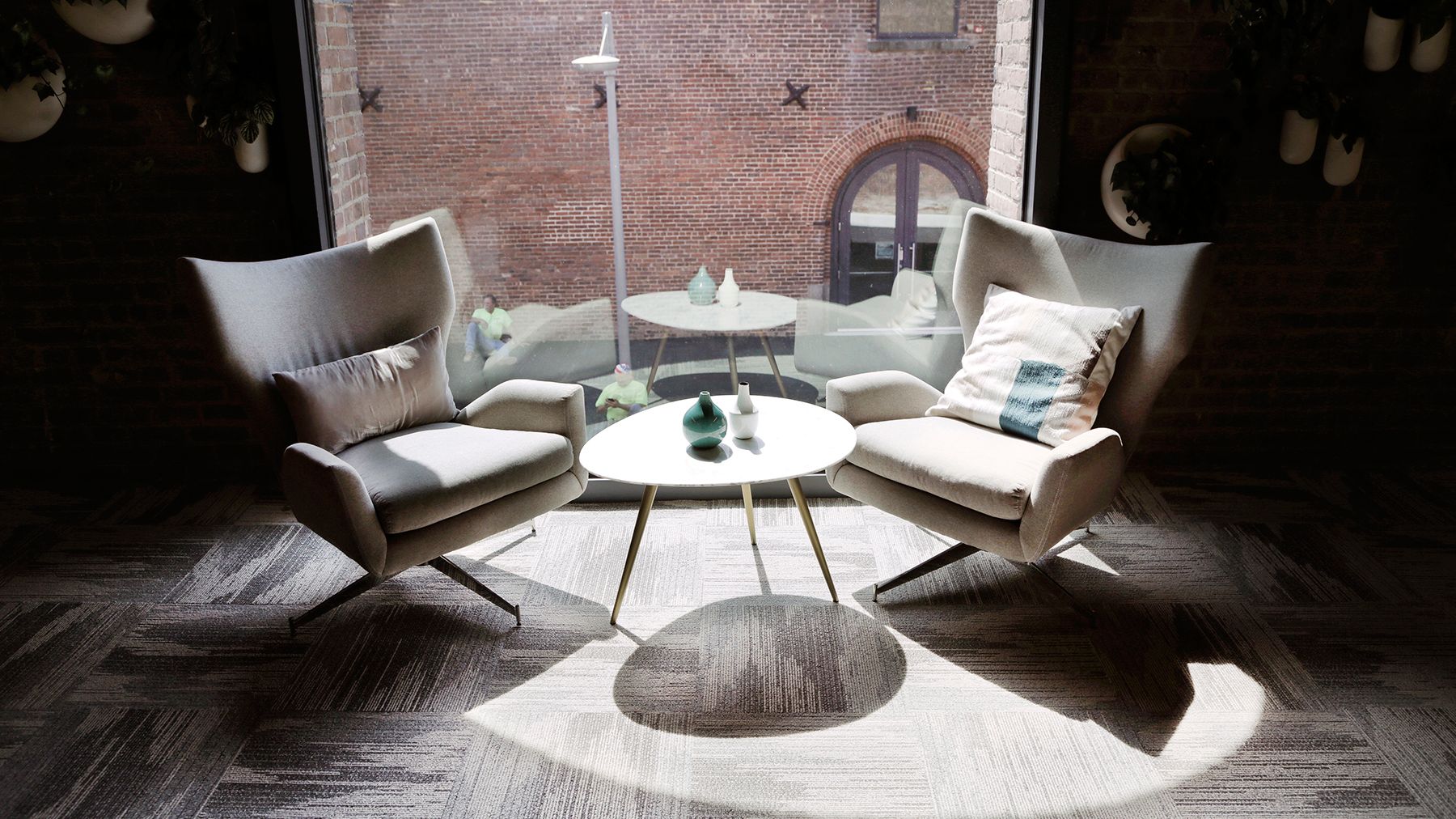 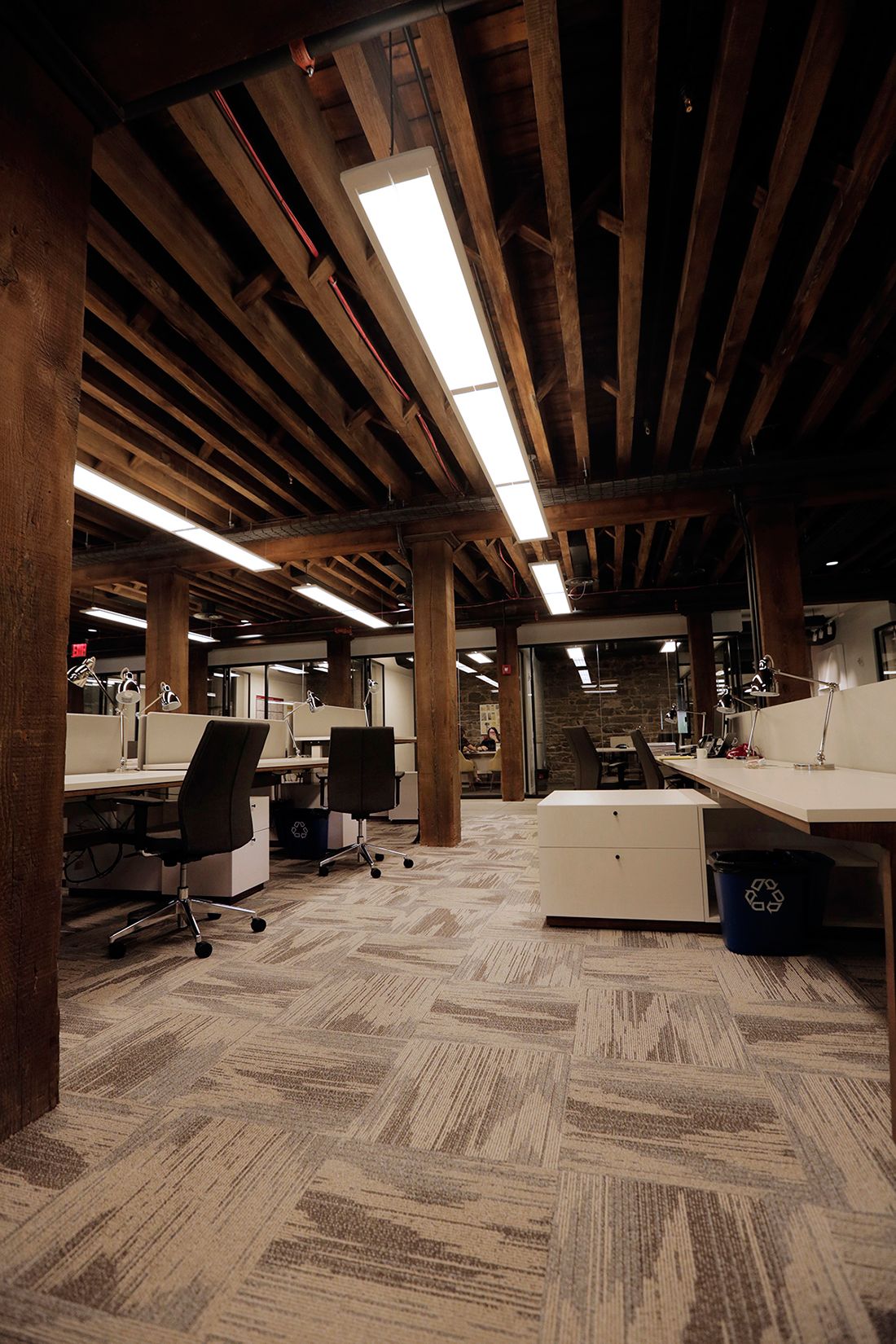 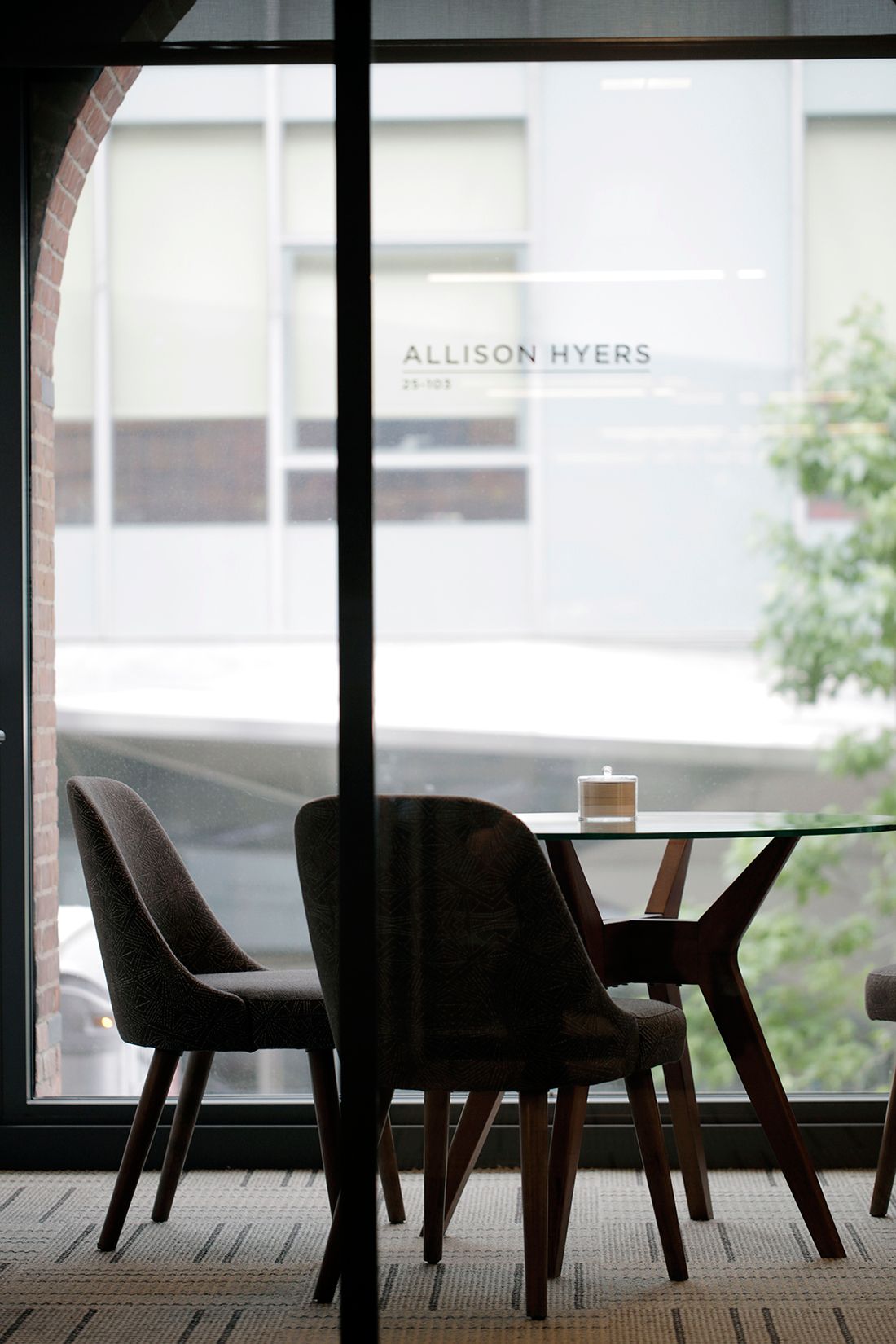 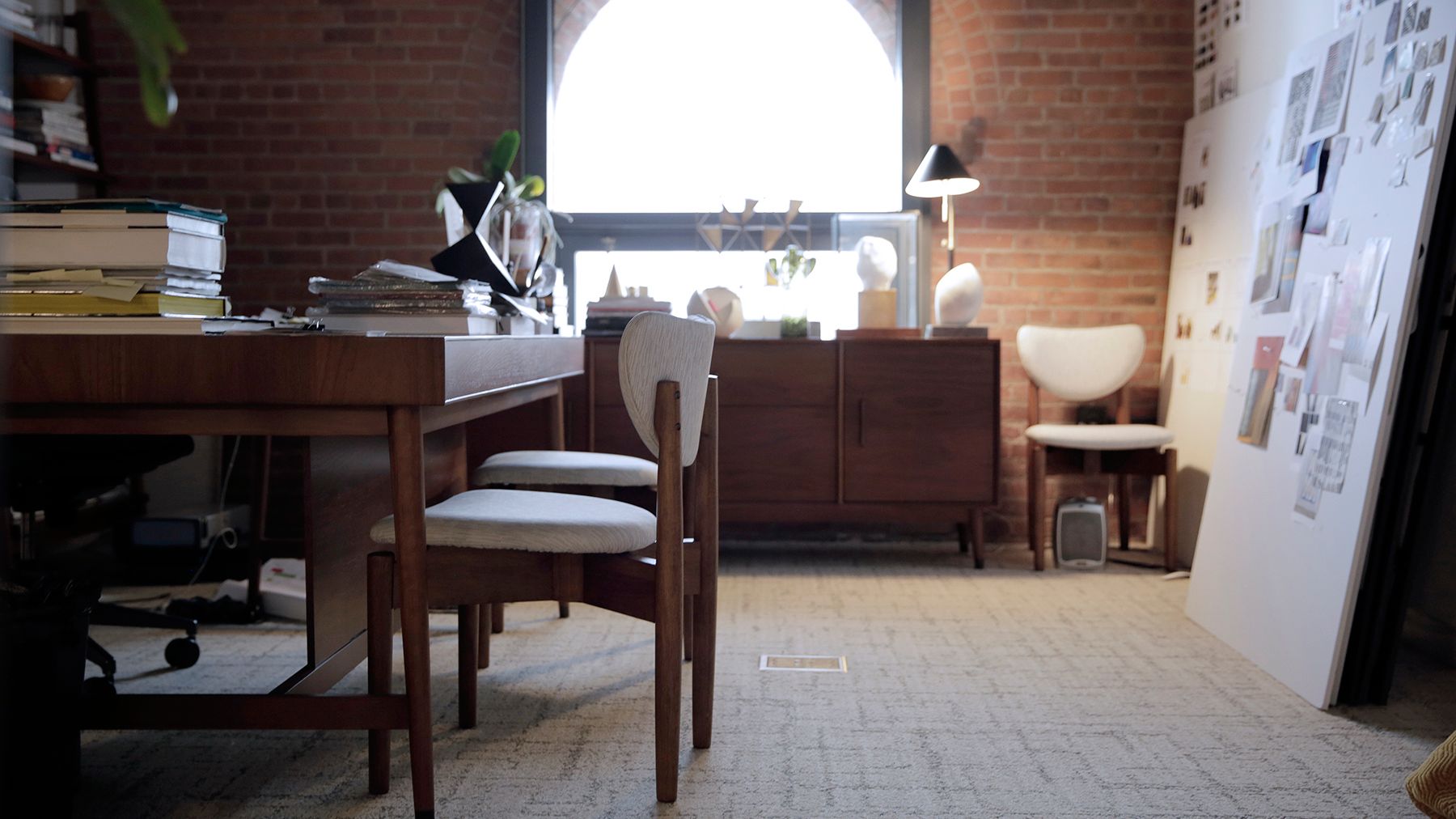 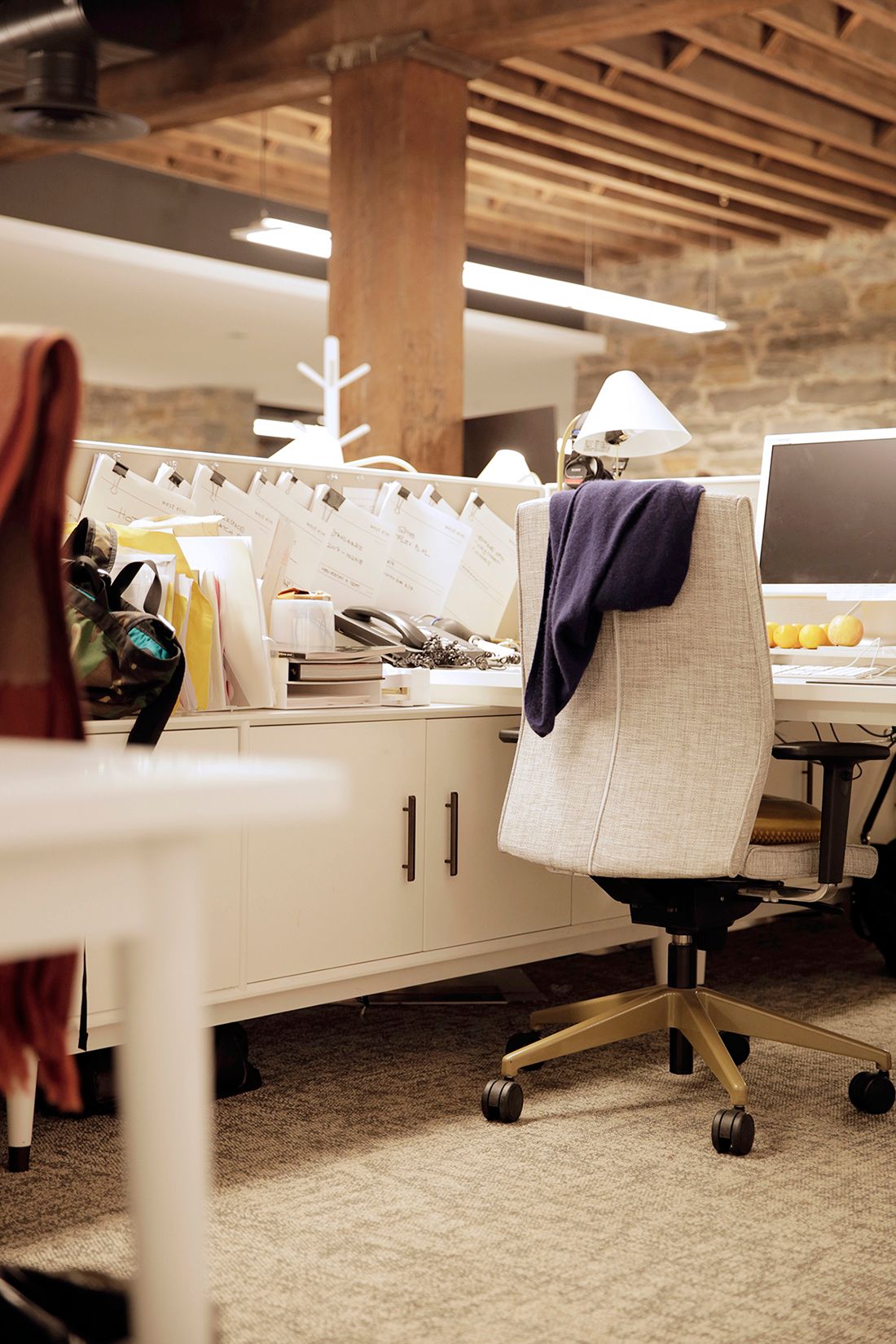 Known for bringing global aesthetics into home styling, they wanted this same sensibility in their new offices. West Elm’s advantage: established relationships with artisans they could tap to develop unique designs for their own use. In essence, the office would eventually become a massive showroom for all things West Elm. Wanting to feel at home while at work made sense for this home goods retailer and was on trend as corporate office design embraces a more residential feel.

Staying grounded in their ideals was essential in helping West Elm continually evolve their vision as this massive project unfolded. Who better to help them with that than long time collaborator Mark Murashige of VMAD? An architect/designer, Mark has worked with William Sonoma (West Elm’s parent company) for years and partnered with Interface on projects for them in the past. But this project offered a unique opportunity to develop a bond between two companies with a shared ethos. Familiar with Interface’s long-standing commitment to sustainable practices, Mark notes that West Elm’s commitment to community and consciousness “seemed a natural fit.”  Interface would provide not only a beautiful and practical product solution, but also groundwork for West Elm’s ongoing commitment to improving their global sustainability initiatives. 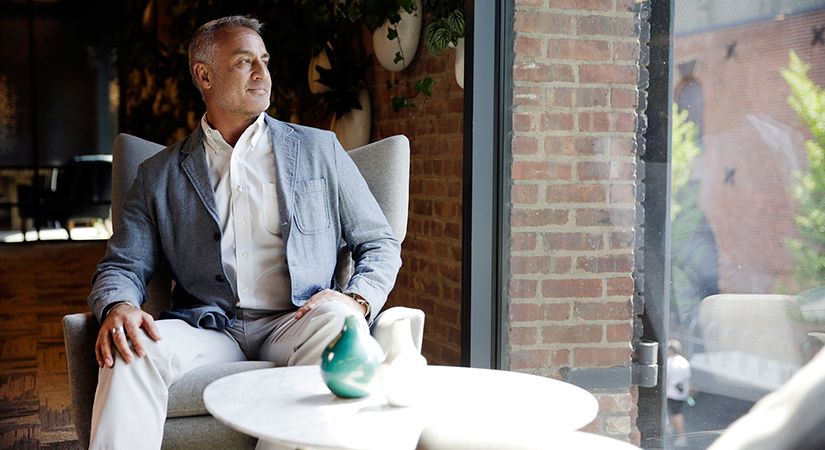 Bringing inspiration boards and materials to illustrate their vision, West Elm’s team met with Interface designer Kari Pei and her group. Together they worked out a look for the office that included existing products and custom designs created to echo West Elm’s global aesthetic. Basket weave, textures and colors reminiscent of West Elm’s artisan pieces were now reflected in the carpet tiles—a collaboration that in designer Murashige’s words was “full of life, very reflective of their brand.”

As for the space itself, there were plans for private and shared offices, design rooms and community spaces. Talking about the benefits of a variety of workspaces, Paolo Kos, VP of Design at W.E. says: “In an open-plan office space where it’s intended for you to sit at your desk 8 hours a day, there’s not a lot of privacy. So having these other spaces alleviates stress. It empowers people and when they have control over how they work, I think they have more of a sense of ownership. They’re happier, more invested in the work.”

From shared working areas to personal ones, everyone appreciated this fresh approach to space. West Elm’s VP of Social Consciousness, Jennifer Gootman travels extensively, so returning to an office that let’s her feel connected to the global artisans she’s works with is inspiring. “I like to surround myself with pictures from travels interspersed with our artisan products. It [the office] really reflects the work we do, the essence of our values.“ 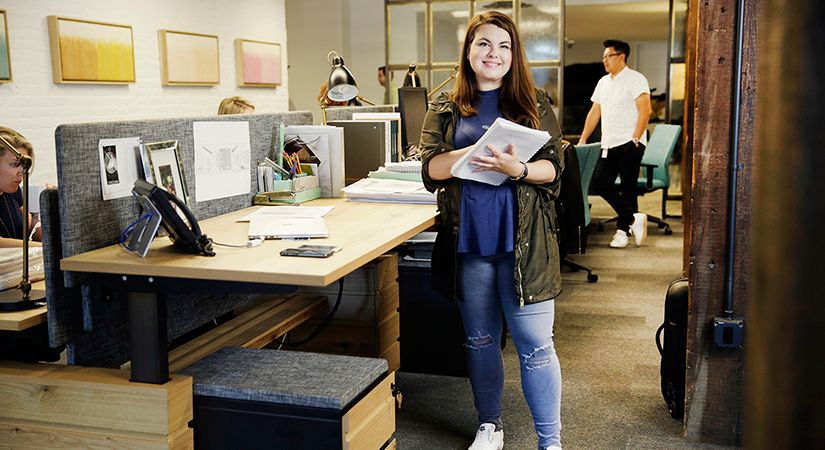 Jennifer was a fan of Interface before it became an integral part of the new office design. As part of her work on a circular economies strategy for West Elm, she was starting a small scale pilot program to keep rugs out of landfills. During that time she became acquainted with Interface. “I’ve long admired them. I know that they’ve really pioneered incorporating recycled content [ReEntry®] back into rugs in the supply chain. I’ve taken a lot of inspiration from what Interface has done to think about how we can incorporate recycled content from our supply chain back into a product. I was glad to know that we were working so heavily with Interface ”

The West Elm/Dumbo project epitomizes the idea of a positive environment but was a massive undertaking that required unprecedented teamwork. What may have seemed a serendipitous relationship to some was perhaps more of an inevitable partnership between Interface and West Elm.

Tell us about the +Positive spaces you’re developing and defining. Join the conversation. #PositiveSpaces.

Designers are optimists. They find the good in a space and work to enhance it, creating a positive impact on its inhabitants. The goal: to go beyond productivity and provide inspiration. Interface wants to celebrate these positive spaces. While few people would refer to a bank of airline seats as a positive space, it functioned…

There’s been a wealth of evidence in recent years demonstrating a clear and measurable link between the way a space is designed and the productivity of workers. Here at Interface, we believe that design of a space should enhance the mood, productivity and creativity of those using it. Positive design is about making a space…