The stereotype of the business traveler—middle-aged, white, male—has given way to a new demographic that is young, diverse and grounded in a culture of work that intersects with all parts of life. In response to this shifting landscape, the hospitality industry is coming up with subtler, more sophisticated environments and a more judicious use of color. 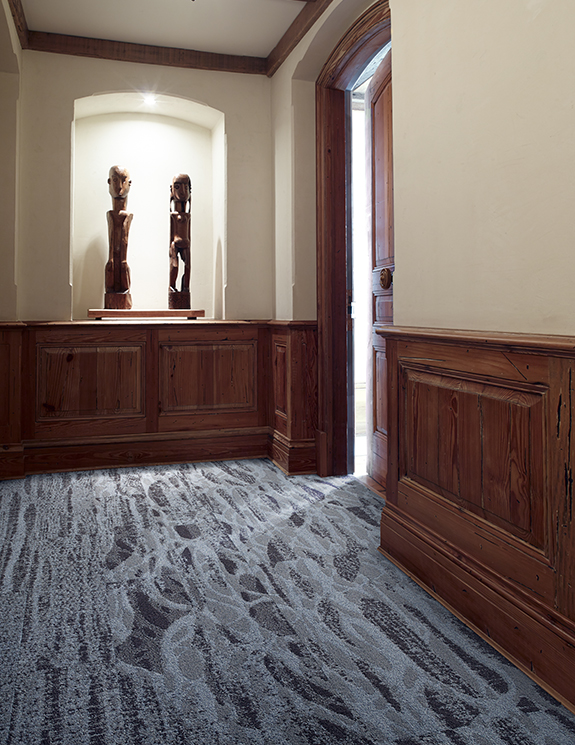 The trend in hospitality flooring is now for subtler, more timeless looks that emphasize pattern and texture.

“Where once we might have seen bold, vibrant colors throughout,” says Melissa Cranshaw, Director of Hospitality A&D Market Development at Interface Hospitality, “the trend is now for subtler, more timeless looks that emphasize pattern and texture.” With this shift, the floor has become less a feature element than an integral part of the overall aesthetic. Cranshaw cites developments at Interface Hospitality within the last year that are propelling this trend forward.

The introduction of the elongated Skinny Planks™ allows for much more fluid transitions, as does Urban Retreat™, collection of three products featuring a transition element along the edge of the tiles in one style that allows for gradual changes. The launch of the Portmanteau™ Collection expands greatly upon this concept, with patterns over a series of tiles that facilitate movement both horizontally and vertically and allow designers to choose which elements create this movement across a floor. This is the kind of versatility and creative license that is every designer’s dream. 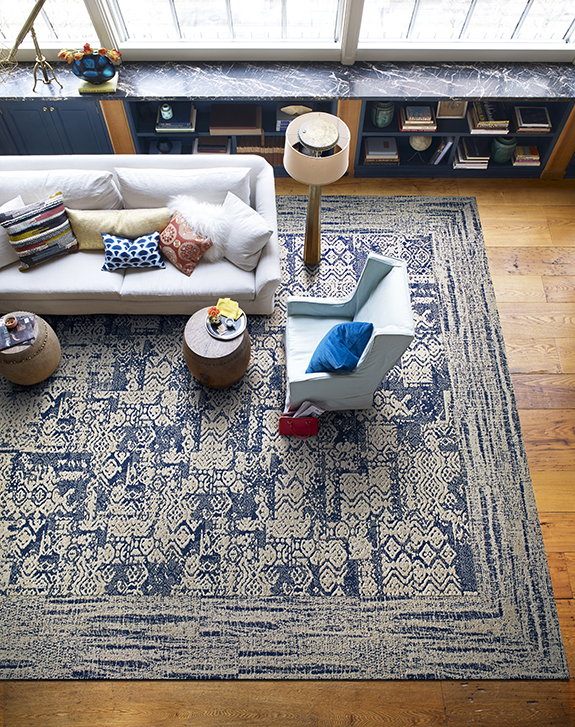 The Portmanteau™ Collection of carpet tile patterns facilitate movement both horizontally and vertically and allow designers to choose which elements create movement across a floor.

Bree Dahl, the ForrestPerkins Vice President who leads the company’s San Francisco office, has watched the evolution of Interface Hospitality with great interest. “We work primarily with 4- and 5-star hotels,” she explains, “and up until recently carpet tile was not even an option for us because of its overtly commercial look.” But due to recent innovations in design, Dahl has used Interface Hospitality carpet in several different applications, including a hotel corridor, a meeting room and a restaurant—even putting in for a waiver from one client whose brand standards specified broadloom. She says her choice is based on what she’s able to do with the product from a design standpoint, not on more expected reasons like ease of maintenance or price.

Using carpet tiles in ways that were previously not possible is an exciting development for designers. “With so many of the new products from Interface Hospitality, you can’t even tell that they’re tile, unless you look really closely,” marvels Dahl. “I’ve chosen patterns with a very textural design that have no clear overall repeat and the effect is remarkable.” Clients, too, have been surprised and pleased. Dahl intends to keep her eye on Interface as it continues to innovate. “There are so many new possibilities that are now in play and we’re really excited about what’s coming next.”

Ever since E.O. Wilson introduced the notion of biophilia in his 1984 book of the same name, there has been mounting evidence that humans are innately drawn to the natural world. It has been proven that views of nature enhance healing and that natural light promotes better learning. Clearly, our connection with nature has a…

We’ve all had moments in our lives when we have experienced something that has shaken us to the core and shifted our very perception of the world. For example, becoming aware that there was an opposite sex, getting your drivers’ license or your first pair of platform shoes. Suddenly a door opened that expanded your…