Inside the World’s First Regenerative Highway

Since ancient times, humans have been altering the environment to create throughways for the transport of food and goods, not to mention travel and military defense. But over the course of thousands of years, little has changed regarding the way roads are built. It’s still a necessity to clear trees and disrupt layers of earth to make way for smoother, more durable foundations, but at what cost?

Highways are one of the most environmentally damaging and dangerous infrastructure systems in the world, adding five million tons of carbon emissions into the atmosphere nationally each year. According to the World Health Organization, transport-related air pollutants pose a direct threat to human health while also damaging ecosystems, which negatively affects agricultural productivity and food security. As concern mounts for our warming planet, the vast and intricate network of roadways across the globe remains an untapped opportunity to reverse escalating levels of carbon emissions.

But transportation systems notoriously lag behind other sectors when it comes to sustainable design, largely because implementing new materials and processes poses significant risks in a safety-first industry. “In the transportation sector, everything you do needs to be looked at through the lens of safety,” says Allie Kelly, who understands these challenges first-hand as executive director at The Ray—the world’s first regenerative transportation system. “You cannot compromise the operational efficiency of the system—there are necessary and high bars in place that Departments of Transportation need to clear; they don’t always have the infrastructure to survey new technology and vet it for safety on their own.” 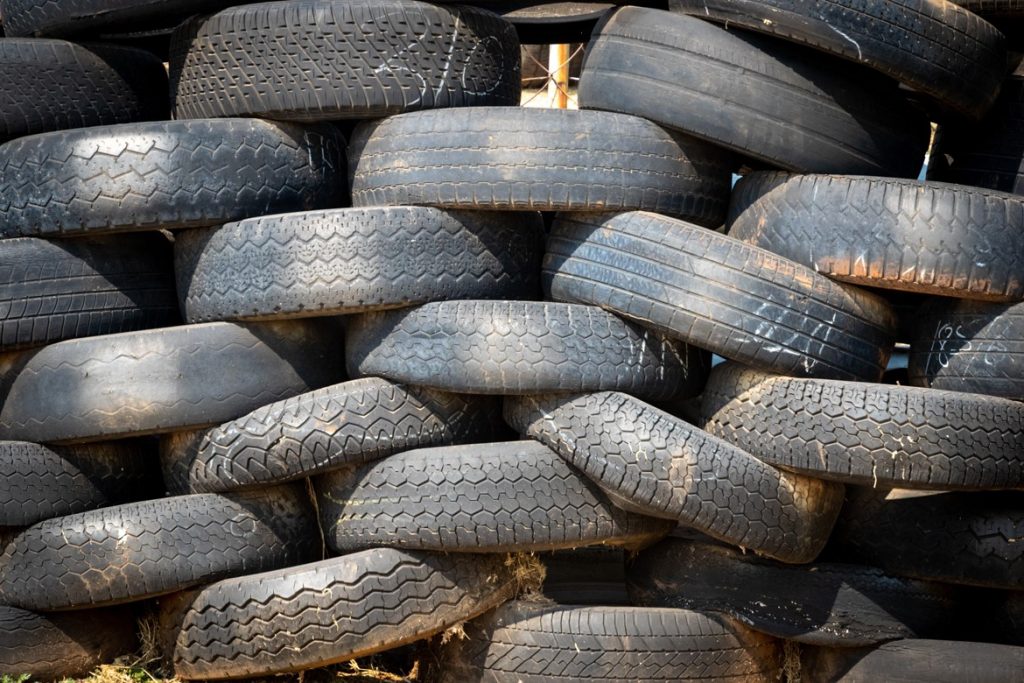 That’s where the team at The Ray comes in, setting in motion revolutionary plans to build a better road using cutting-edge technology in honor of the late Ray C. Anderson, green business innovator and founder of Interface—the leading manufacturer of sustainable flooring. To create a greener roadway, the team first focused on what Kelly calls the “low hanging fruit.” For instance, each year 300 million tires are discarded in the U.S. alone, so The Ray puts those to use, incorporating them into paving materials to create surfaces with added durability. Given the malleable nature of rubber, pavement that includes tire pieces are less prone to cracks, limiting environmental disruptions that come with road repairs while creating an economic benefit.

The Ray also incorporates self-pollinating plant species to absorb water and maintain a healthy ecosystem, such as wildflowers and perennial wheat, which has deep-set carbon-absorbing roots, as well as a right-of-way solar project featuring 2,600 high-efficiency solar panels. The solar panels generate continuous clean energy—some of which is used to power LED lights that illuminate The Ray, which also offers drivers a solar-powered tire pressure sensor at a rest stop near the Alabama state line. The sensor helps drivers maintain proper tire pressure and, ultimately, prevent crashes. 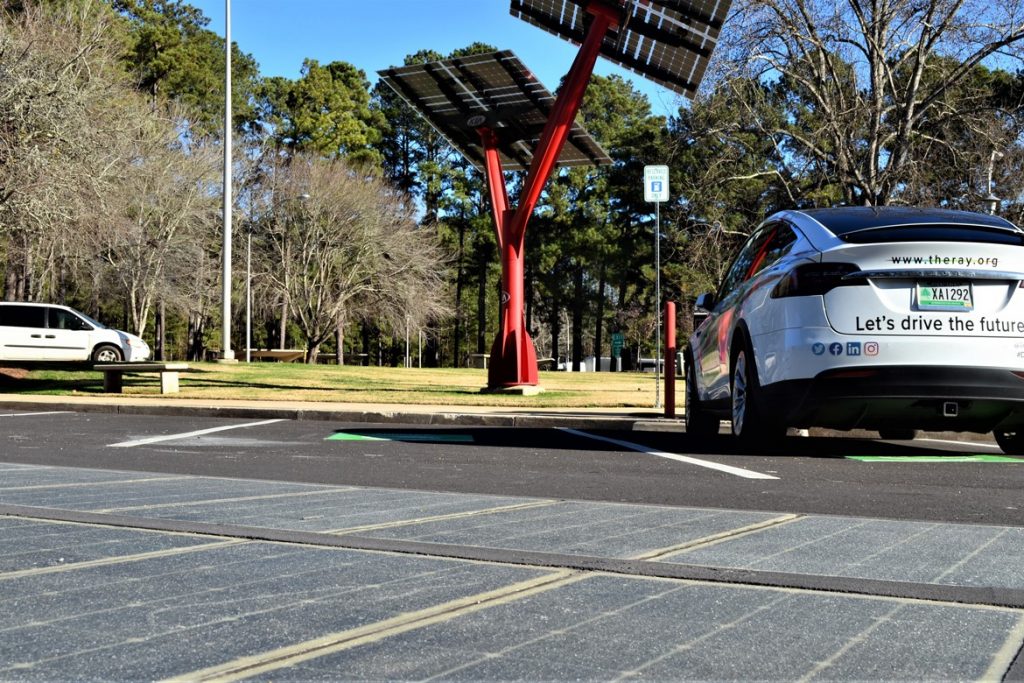 Solar panels are being used in more ways than one to power innovative technologies throughout The Ray. Photography courtesy of The Ray.

Through these innovations and others, The Ray is changing the way developers, transportation officials, and urban planners think about how roads, and their surroundings, impact the environment. It also serves as an invaluable asset to DOTs throughout the country, providing nearly five years-worth of data and research in support of the creation of additional sustainable and regenerative roads due to a partnership between the Ray C. Anderson Foundation, Interface, the Georgia Conservancy, and Georgia Tech’s School of Architecture.

What led to the inception of this groundbreaking project? Harriet Langford, Ray Anderson’s daughter, recognized the need to create a regenerative road shortly after the state named an 18-mile stretch of highway after her father, which connects from West Point, GA, where he was born, to LaGrange, GA, the first home of Interface. “When that was named the Ray C. Anderson Memorial Highway in the summer of 2014, it was Harriet who had her own epiphany, saying: ‘We just put the greenest industrialist’s name on a dirty highway,” recalls John Lanier, executive director of the Ray C. Anderson Foundation. “From that moment on, Harriet had a clarity of vision. She became laser-focused on creating the world’s first regenerative highway.” 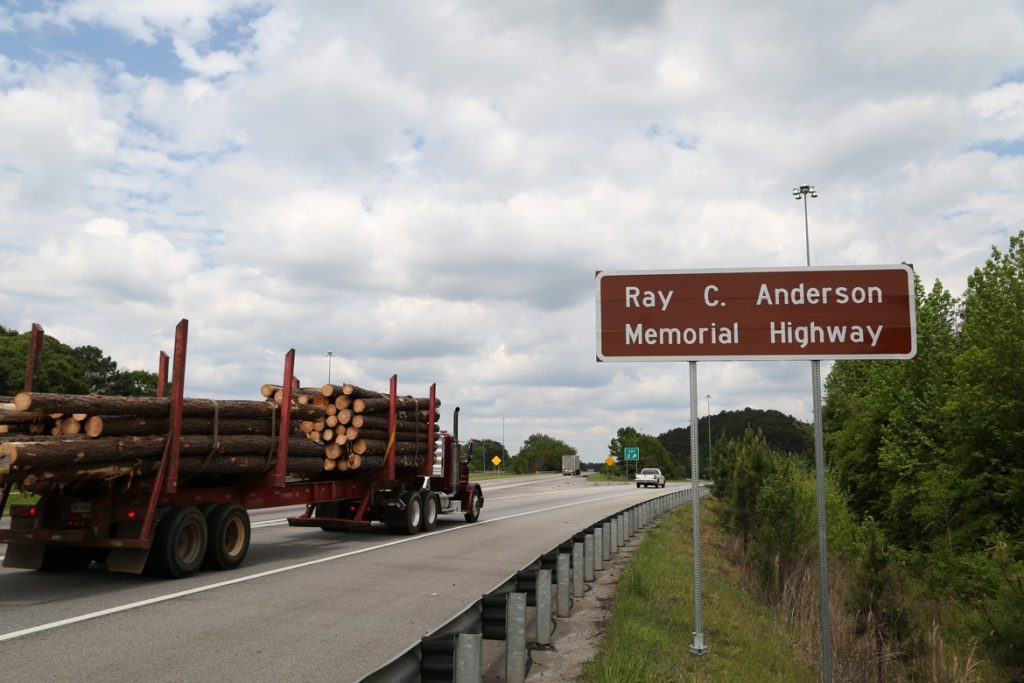 Several regenerative pilot projects are underway throughout The Ray’s 18-mile stretch of I-85, including pollinator gardens and bioswales. Photography courtesy of The Ray.

As The Ray works toward becoming the first zero fatality, zero carbon, and zero waste highway, it also is preparing for the next wave of technological advancements, such as the advent of self-driving cars, and innovators around the globe are taking notice. “The Ray asks and answers the same question that Ray and Interface did. Back in 1994, Ray asked what a regenerative industrial manufacturing company would look like, and he spent the last 17 years of his life working to create it. In the process, Interface became an example for all of business and industry,” says Lanier. “The whole team [at The Ray] is doing the exact same thing, just for transportation rather than industrial manufacturing.”

Building a Forest in the City

Building a Forest in the City

We’re all familiar with urban sprawl. But what impact does it have on those who live and work in an urban environment? And how does the built environment play a role? By 2050, two-thirds of the world’s population will live in urban areas, according to the Nature Conservancy. An increasing urban population means that cities…

Before biologist Janine Benyus, biomimetic design was an amorphous idea, without a singular guiding methodology or end goal. That all changed with the publication of Benyus’s 1997 book Biomimicry: Innovation Inspired by Nature, which gave the world its first working definition of biomimicry and introduced us to the ingenious ways the Earth has thoroughly mitigated many design problems over its 3.8 billion-year development.