Here are some highlights:

Sustainability and innovation have always been core to Interface’s DNA. When Jay came to Interface, he knew that to raise our ambition level even further would require a solid business case. As a company, we spend 20 to 25 percent of our operating income on sustainability initiatives, which, he pointed out, is something almost unheard of at other companies. That means decisions about what goes past the research and pilot stage to market must be vetted and tied back to our business performance.

Jay believes that performance and purpose are symbiotic. He told the crowd, “We have to perform along the way – it’s really dangerous to say, ‘I’m not going deliver in the top quartile financial performance because I’m purpose-driven or focused on sustainability.’”

Jay became COO of Interface during somewhat of a “mourning period” at the company after the passing of our late, visionary leader, Ray Anderson. At the time, Interface was underperforming our peer set. He shared with the audience how he was hired with two key objectives: to focus on growing the business and to create a tangible plan to deliver our Mission Zero commitments. The leadership team brought together Interface’s original Eco Dream Team, including leaders like Paul Hawken, Janine Benyus and Bill Browning. Expecting a pat on the back for the company’s efforts, he was surprised when Paul insisted instead that “doing no harm is not enough” and that, to truly build on Ray’s legacy, we must step up, do more and take on climate change. 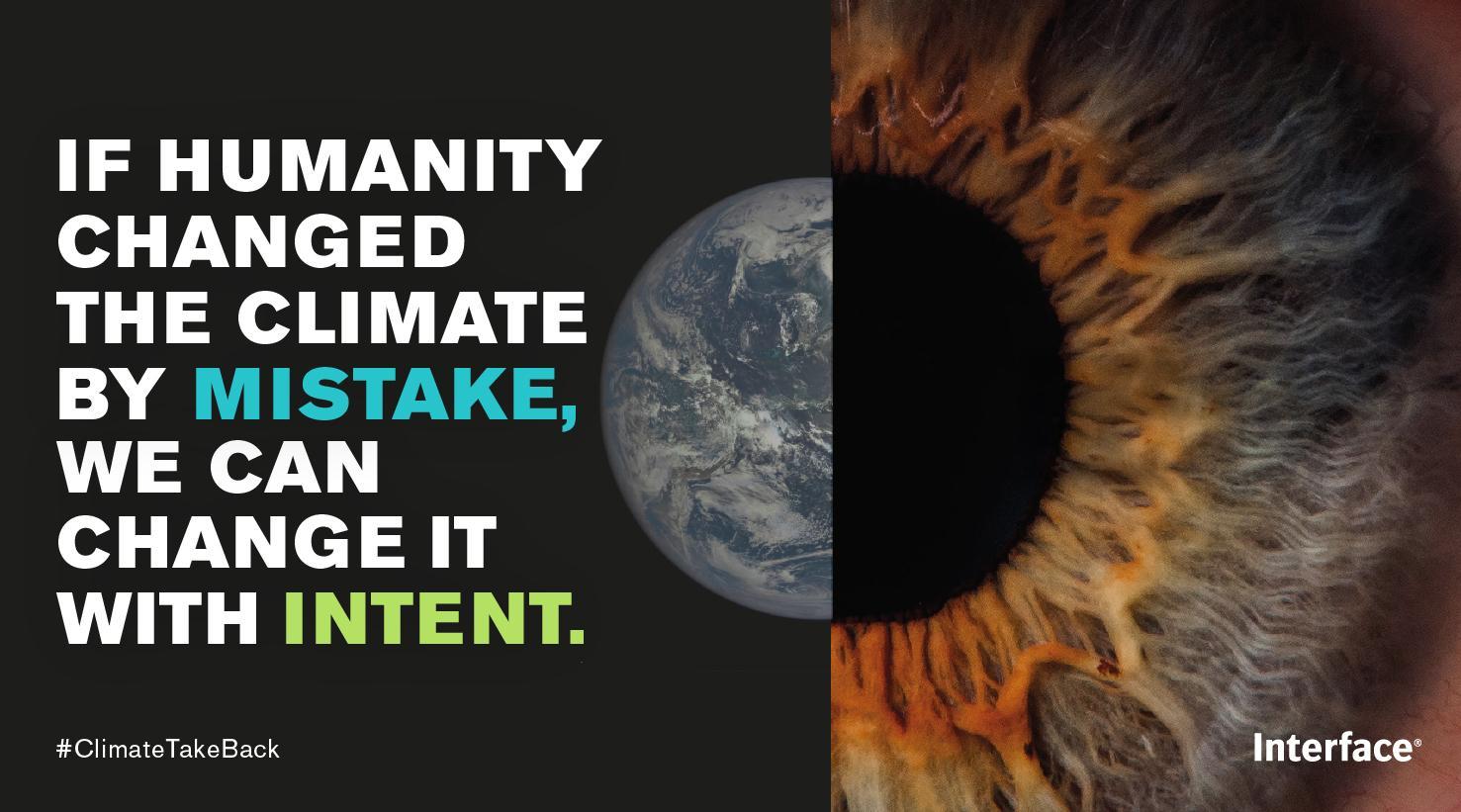 The team went back to the drawing board. After spending over a year studying the science, climate change trends and industry efforts, we launched our new mission: Climate Take Back to demonstrate that a business can indeed make our climate fit for life again while staying profitable and competitive.

One of the core tenets of Climate Take Back is incorporating a mindset to “love carbon” – to stop seeing carbon as the enemy and instead look at it as a resource. We must shift the old industrial model of “take, make, waste” to an entirely new framework of “waste, make, re-take.” The language is intentionally provocative.

Instead of using more raw materials, we want to push using waste materials as manufacturing inputs. And we’re starting to make progress – such as our latest Proof Positive tile, a carbon negative concept carpet tile – a first in the industry. Over the next two years, we aim to introduce Proof Positive as a financially viable product in the market and hopefully lead the next wave of innovation in our product category.

The critical role of the Board

Jay also recognized that while setting ambitious goals is today an embedded part of Interface, having a Board of Directors willing to look at Interface’s performance and health from a 20-30-year time horizon, remains a critical factor in our company’s success. This type of flexibility is rare in today’s business environment, he noted, where most boards are tied to creating short term shareholder value, instead of promoting a culture of innovation and long-term thinking.

Emphatically responding to a question from Eric, Jay said, “[We’ve proven that] sustainability drives innovation. We have 20 years of history on how our approach to sustainability has created profitable differentiation for Interface.”

The movement for us started in 1994 and fortunately, other businesses have since caught on. However, the space has become quickly crowded making the technical differences between companies’ sustainability efforts blurry.

In his closing remarks, Jay stressed to the audience of business leaders and media that this is why Interface has decided to change the general sustainability conversation from “do no harm” to specifically focusing on using carbon as an asset. “We’re hopeful that we can take a leadership position in this space. As a relatively small company, we have to be the pioneers. We have to lead the way.”

Along with leading the way on solutions, we also believe that we must lead the way on building a more positive narrative on our ability to solve climate change. Because, as experts told us overwhelmingly, solutions exist. In our recent global survey we found that 95 percent of climate experts and 91 percent of emerging business leaders believe we can create a climate fit for life. With more demand, we can build a more scalable economy of solutions. Focusing on what’s not working leads to inertia. So along with pursuing our mission to make our climate fit for life again, we are also working on spreading a more optimistic narrative regarding our collective ability to do so.

Visit our site to learn more about Interface’s Climate Take Back mission and get involved.

Architecture for a New Way of Learning

Architecture for a New Way of Learning

21st century learning models are no longer teaching all students in the same way, thus we shouldn’t be designing all schools the same. For an effective change in learning models, we need to adapt the environment in which learning takes place. So often we see administrators, facility managers and teachers struggling to teach within the…

Identifying the 14 Patterns of Biophilic Design

Identifying the 14 Patterns of Biophilic Design

We spend an estimated 11 hours a day on technology and up to 93% of our time indoors. Now more than ever, harnessing Biophilia in the design of our urban living and working environments is vital to our health and well-being. Learn about the 14 individual elements of biophilic design and how to incorporate them to collectively enhance the well-being of an interior space.