Whether organising your way to happiness or embracing hygge, the Danish philosophy of cosy living, it always seems that just when you catch up to a design craze, insiders are already on to the next. So while the ascendance of ​Ikigai​ was intriguing, scepticism seemed wise. ​Ikigai​, which translates to “having a purpose” in English, is of Japanese origin, associated with the feeling of self-fulfilment earned by pursuing a meaningful life. Today, it’s being embraced by the creative community. But unlike other decor movements that entail, say, purging your closets of joyless objects or surrounding yourself with adorable throw pillows and charming ceramics, it’s not so dictatorial. After all, who can argue with the idea of purpose-driven design?

Lucky for us, the design industry is embracing ​Ikigai,​ not as a trend, but as a time-honoured philosophy – and one that’s here to stay. Kari Pei, VP of Global Design for Interface, the global commercial flooring company, first learned about ​Ikigai many years ago while working in Japan, when she was teaching Japanese mills how to use French weaving programs. “Over the years, I’ve studied Japanese design, culture, and architecture. Japanese culture strives to work in harmony with the natural environment, which gets right at the heart of our mission. The concept of Ikigai marries perfectly with my own personal (as well as Interface’s) design goals,” she says. “I think of ​Ikigai ​as an existential belief closely related to well-being and happiness, through connection with others and with nature.”

Starting with the edict that great design must exist in harmony with nature, Pei and her team set out to create modern, beautiful, carpet tiles with the environment in mind. The result: Interface’s breath-taking ​Embodied Beauty™ collection. Inspired by timeless Japanese aesthetics, the collection is not only alluring, but innovative, as all seven styles of Embodied Beauty are carbon neutral across their full product life cycle, with three styles being carbon negative when measured cradle to gate. Ultimately, all Embodied Beauty options help lower the carbon footprint of a space. “Interface’s purpose is to lead an industrial re-revolution, or to show the world that business can be used as a force for good,” says Pei, who is on a mission to create products that benefit the environment. “We have a responsibility to the planet,” she says. “Each time we produce a carpet tile, we’re using energy and resources that aren’t easily replenished. That’s why we work so hard to minimize the carbon footprint of our flooring by using bio-based materials and recycled content.” 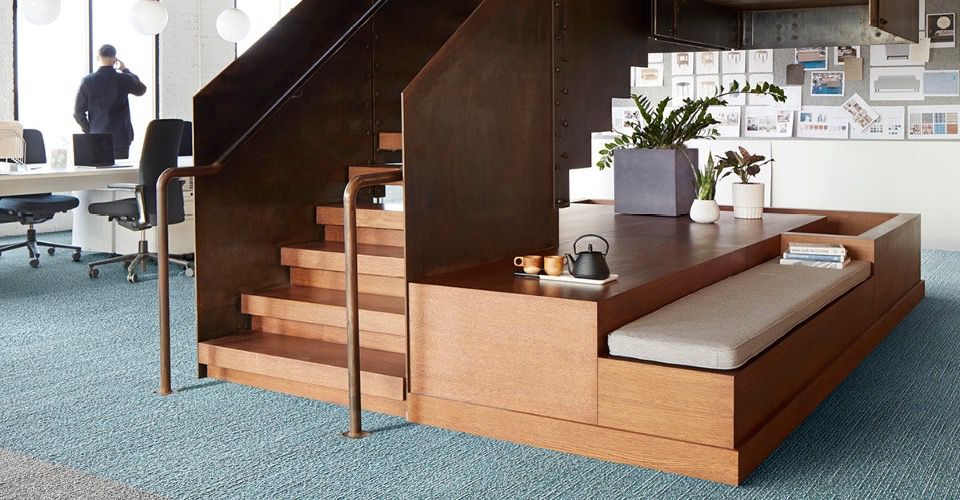 Accordingly, everything from her choice of materials to the weight of the carpet and even the composition of the tiles’ backing was considered in terms of its environmental impact. “We used a totally new machine and new yarns to create the carbon negative products in the Embodied Beauty collection, so we were working with a brand-new set of tools, which influenced everything from pile heights to design, textures, and colourways,” says Pei.

Best of all, she didn’t have to sacrifice style for sustainability. ​The ​Embodied Beauty​ collection reflects the refined simplicity so often associated with Japanese culture. As a whole, the collection embraces calm, muted greys in warm and cool tones alongside natural colours for added dimension. Architects and interior designers are especially drawn to the tiles for their wealth of textural possibilities, which helps them to effortlessly create floors that feel luxe, yet are neutral enough to work with a myriad of palettes.

What gave Pei as a designer so much creative license is that ​Ikigai​ is a worldview that complements other design schools. Whether you’re a minimalist or maximalist, a fan of mid-century design or Art Nouveau, Ikigai’s focus on purpose allows it to be a gentle, guiding force. “​We were inspired by many traditional Japanese crafts. Firstly, the art of ​kintsugi​, which creates something totally new and beautiful through the act of mending the broken or repairing,” notes Pei. “The creation of these carbon-storing products takes something traditionally seen as an enemy – carbon – and creates a product that helps to mend our damaged environment, so we’re sort of flipping the script.” And the fact that her handiwork is manifested in tiles (versus traditional rugs) makes ​it easier than ever to control the carbon footprint of a space – designers can utilize them in a mass open area, like an office, or arrange the tiles to accommodate whatever square footage exists, in any creative configuration.

Pei​ was also able to incorporate other Japanese design elements under the umbrella of ​Ikigai. She leaned into the ​idea of ​wabi-sab​i, or embracing the imperfect, as revealed in the unscripted floor patterns found in Geisha Gather™. She drew inspiration from ​sashiko​, a decorative stitching technique used to reinforce textiles, as seen in Interface’s Sashiko Stitch™ products. Another traditional Japanese craft called ​boro – ​a beautiful technique of combining remnant fabrics, thus creating a patchwork of texture and colour – plays an overarching role.

So if you’re ready to dip your toes into this design movement and effortlessly elevate your space, a floor designed with Interface’s Embodied Beauty carpet can easily be the hero piece of an ​Ikigai​-centric decor scheme. While design fads come and go, this new thinking – with its innate practicality and Earth-friendly ethos – will never go out of style.

There is no question that in the months of prolonged isolation and distancing, we’re starting to feel the desire for social connection. The reality is that we need and want to go back to work, which means buildings need to adjust – and quickly. But how can we incorporate health and wellbeing? And what is our responsibility to create that sense of physical and psychological safety in the built environment now and into the future?