eOur NY+LON Streets collection is inspired by city streets, interconnectivity and familiar industrial architecture. As city lovers, we are naturally energised by the urban environment. We’ve drawn inspiration from two of the world’s most iconic cities, exploring the textures, design details and connections between the sidewalks of New York and the streets of London.

The City as Inspiration

As more and more of us live and work in urban areas, the influence of our cities continues to grow. Over half of the world’s population currently live in cities and, by 2050, it’s estimated this proportion will rise to 68 per cent.

The city holds profound meaning to us all. While we each have our own favourite cityscape or neighbourhood, our attachment is universal because the notion of community sits at the heart. In his book entitled The Theatre of Work, Clive Wilkinson describes the city as a place which exists to maximise the opportunities for human interaction: “All physical activity is dependent on the street network or grid, and all life flows through it.” And, like so many other workspace designers, he suggests how closely intertwined workspace and city design have become.

With the rise of telecommuting and remote working, for a short while it seemed that we might abandon the city altogether to work at home instead. But what we gained in convenience, we lost in social connection, and we’re falling back in love with the notion of a shared workspace once more.

The office is in the process of not only being revived, but re-imagined and redefined as the vibrant heart of new business communities. And nowhere is this more apparent than on the streets of key cities across the globe. The rise of the gig economy and the explosion of start-ups has led to coffee shops, retail stores and hotel lobbies morphing into co-working spaces. A new breed of working environments is emerging that are improvised, experimental, informal, and social to the core.

There is no better example of fostering and nurturing a sense of community and belonging than the city itself. When Unilever developed their new headquarters in New Jersey they set out to design an office environment that would be as convivial as a town square. The design concept fuels a bustling work environment, much like a city, to encourage employees to connect with each other in spaces designed to strengthen workplace culture. 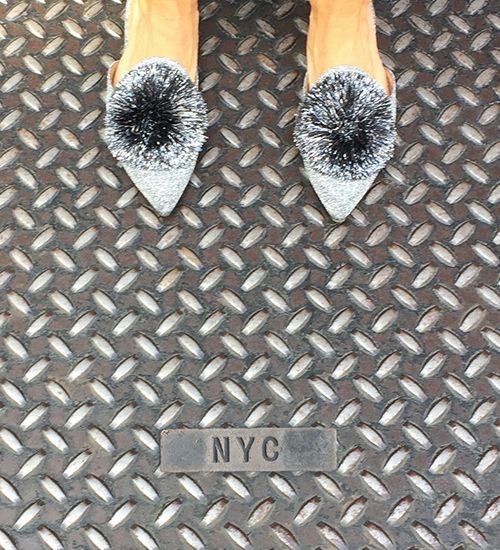 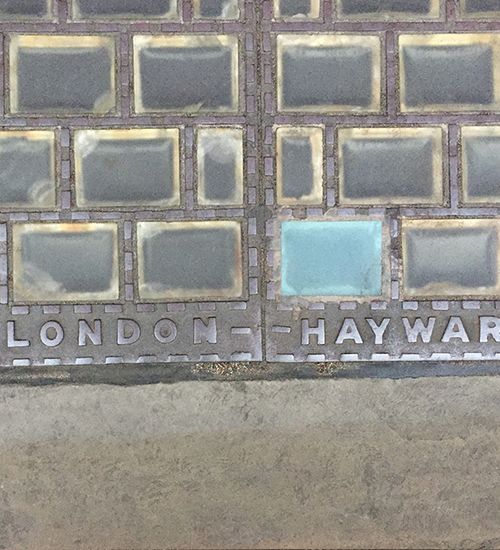 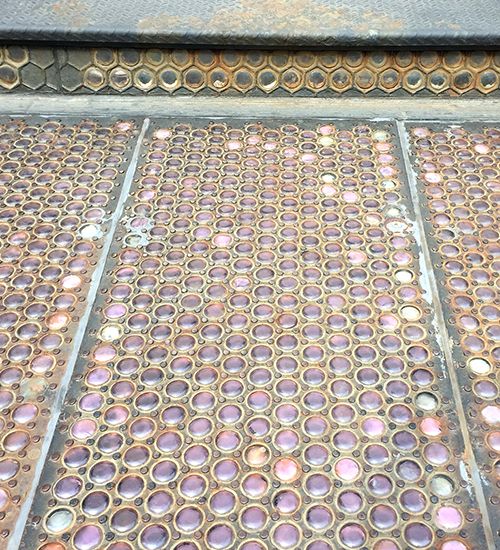 Our cities have always told the story of generations past, through a rich source of urban industrial heritage. Despite the pace of technological change and futuristic advances in materials and innovation, many of us (myself included) hope that we will retain and cherish these symbols of endeavour.

This sentiment is amplified by our collective need to adopt more sustainable practices. Architects and designers alike are beginning to view our urban landscape from a fresh perspective. With an approach that’s often more akin to an archaeological dig than an architectural project, they’re keen to restore, re-purpose and regenerate buildings and environments that already exist, rather than simply make new. Central to this concept is the spirit of experimentation; remixing, reusing and reinterpreting – with one eye on the future and one firmly rooted in the past.

In London, a beautiful example of this can be found at King’s Cross where two converted 19th-century coal warehouses have been transformed into one of the most iconic destinations in the city – named Coal Drops Yard. Nestled just behind this development, a trio of gass holder frames are now home to some of the most luxurious apartments in the city.

In the world of workspace design, some of the most unusual and unlikely buildings have been transformed into working environments; including an old bread factory, a machine shop for military destroyers and submarines, an artist’s studio and a hay-baler manufacturer. Our own Interface office in Halifax was once a mill and the building has been lovingly restored and repurposed, making the most of natural features and adding new contemporary twists.

With the intention of building a sense of local connection in our cities and neighbourhoods, the use of materials and individual design details are often closely intertwined with the story of locality. Proving that it’s possible to draw a connection even in a new development, the co-working space of Equinox and Industrious uses a wallpaper by Kartell that mimics the concrete that surrounds the space in Hudson Yards.

Street architecture is inspiring new designs from retail to fashion, elevating even the most humble of materials and construction methods to high design features.

Some of our favourites examples include the artful installation of Wardrobe NYC in New York, inspired by the scaffolding that is a functional feature of city streets. Equally as creative, and the winner of best stand 2020 at Stockholm Furniture Fair, the Norwegian Urban Furniture manufacturer Vestre displayed it’s products on a stand made entirely of low waste and reusable components including brick, wood and gravel. Celebrating the most popular materials in our urban landscapes, the Concrete Utopia collection is a unique collaboration with Apparel & Lovers. 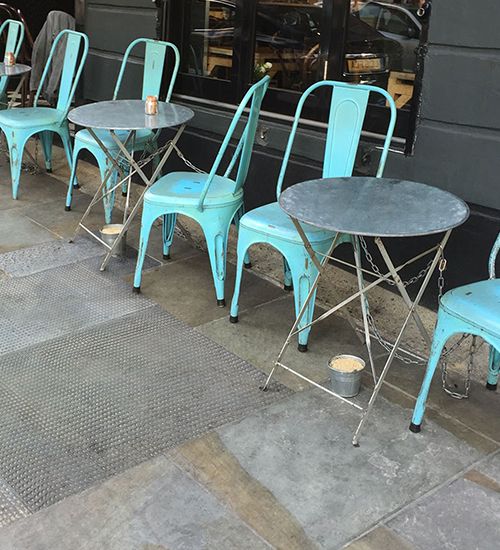 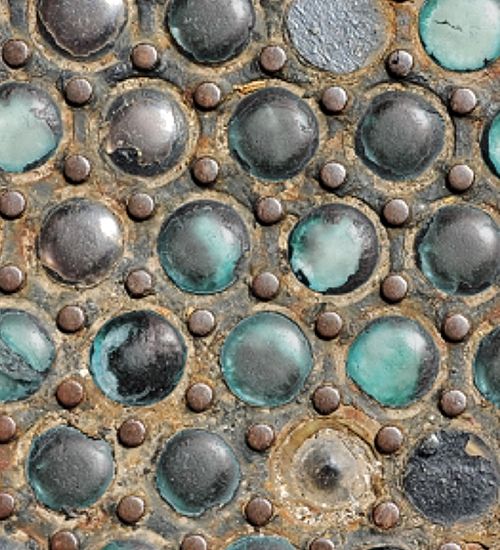 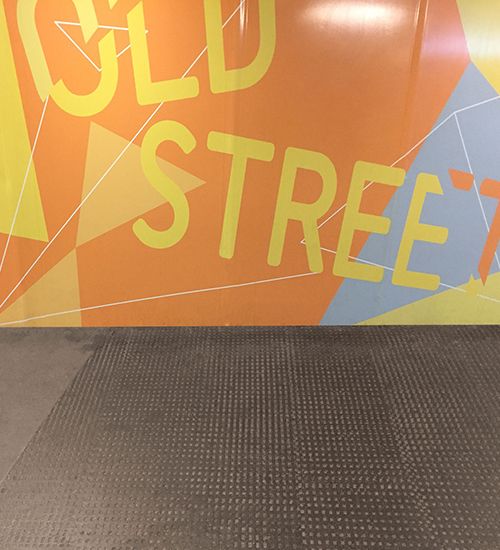 The City as Shared Memory

Shared memory is a very powerful communication tool. We’re subconsciously attuned to the individual fabrics of cities and towns and we navigate these spaces instinctively. Very often it’s the smallest of patterns and design details that set certain streetscapes, neighbourhoods and districts apart, and we read these details subconsciously and intuitively, finding comfort in the familiarity it brings.

Slowing down is key to building meaningful connections in the city. And as our cities become car-less, we are far more likely to spot these patterns. In 2020, many cities are working towards becoming car-free and opening them up for walking – the best way to see the city.

In the age of anxiety, people are seeking connection with themselves, each other and their immediate environment. Taking time to observe our surroundings is one way to connect and an interesting company that caught our eye when we were researching the collection is Patternity who run pattern spotting tours on the streets of London. Described as, “an opportunity to discover pattern in unexpected places, break out of closed down ‘busy’ mode and open up to fresh inspiring perspectives.”

There are approximately 8000 miles of sidewalks and paths in New York City, and over 60,000 streets or roads in a 6 miles radius of London’s Charing Cross. As your move through one neighbourhood to the next, the topography and streetscapes subtly change and our range plays homage to these discreet design details, patterns and textures that belong to specific neighbourhoods.

With a total of six different designs, the collection takes you on a journey of London’s Wheler Street, Old Street, Dover Street, and Reade Street in London – interpreting familiar street textures in a variety of scales. In New York, Mercer Street embraces an unconventional grid pattern, while Broome Street injects contemporary colour.

We’ve drawn inspiration from New York and London streetscapes, with coloured patterns reminiscent of vault lights from the 19th and early 20th century.

With sustainability top of mind, the collection contains a high percentage of recycled content and backing is CQuest™Bio. CQuestBio is a non-vinyl, non-bitumen backing made with biopolymers, and bio-based and recycled fillers which are net carbon negative.

To find out more, explore the NY+LON Streets Collection here.

As countries begin to take tentative steps out of lockdown, we consider 10 possible implications for office life. Too early to be described as predictions, more as food for thought.